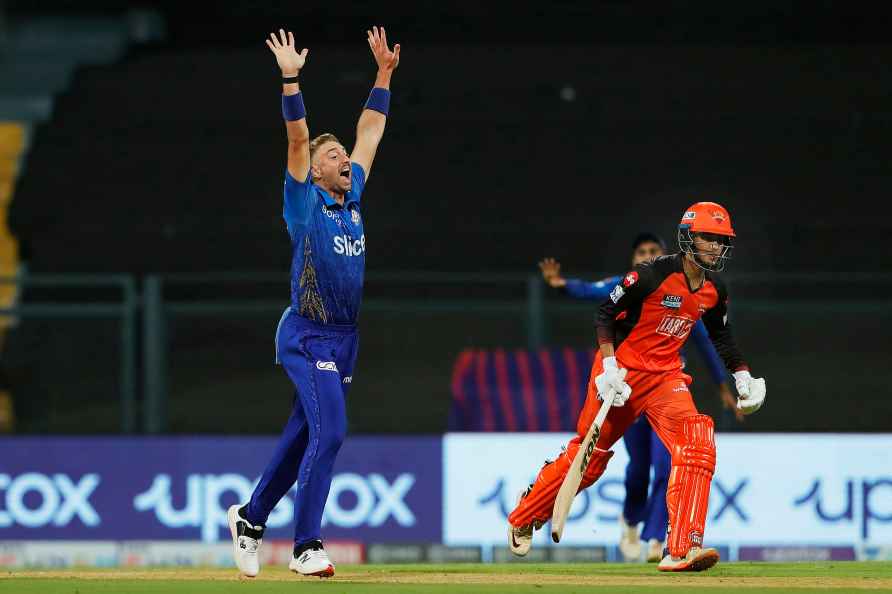 [Mumbai: Daniel Sams of Mumbai Indians appeals during the 65th T20 cricket match of the Indian Premier League 2022 (IPL season 15), between the Mumbai Indians and the Sunrisers Hyderabad, at Wankhede Stadium in Mumbai, Tuesday, May 17, 2022. (Sportzpics for IPL/ /PTI] Mumbai, May 17 : Mumbai Indians skipper Rohit Sharma won the toss and elected to field first against Sunrisers Hyderabad in Match 65 of IPL 2022 at the Wankhede Stadium here on Tuesday. With Mumbai Indians already out of contention, Sharma said they are trying different things, trying different players with an eye on the future. "We're trying out things and they have been working out. We have to keep an eye on certain players and give them game time to have a look at them. The core group needs to play, we thought about giving certain guys breaks but there is one more game after this," said Sharma during the toss. Mumbai made two changes in their playing XI, bringing in Mayank Markhande and Sanjay Yadav in place of spinners, Hrithik Shokeen and Kumar Kartikeya. Sunrisers captain Kane Williamson said he would have batted first if he had won the toss. "We were going to have a bat first, considering it's a drier surface and our strength is in putting up runs on the board," he said. Sunrisers made two changes as Priyam Garg come in for Shashank Singh while Fazal Farooqi comes in for Marco Jansen. Williamson said they are tactical changes. "Things are getting tight and we need to adapt quickly. It's a good opportunity for Priyam to play at the top of the order with Abhishek Sharma," he added. Playing XIs: Mumbai Indians: Ishan Kishan (wk), Rohit Sharma (c), Tristan Stubbs, Tilak Varma, Tim David, Daniel Sams, Ramandeep Singh, Sanjay Yadav, Jasprit Bumrah, Mayank Markande, Riley Meredith Sunrisers Hyderabad: Abhishek Sharma, Priyam Garg, Kane Williamson (c), Rahul Tripathi, Aiden Markram, Nicholas Pooran (wk), Washington Sundar, Bhuvneshwar Kumar, Umran Malik, T Natarajan, Fazalhaq Farooqi. /IANS