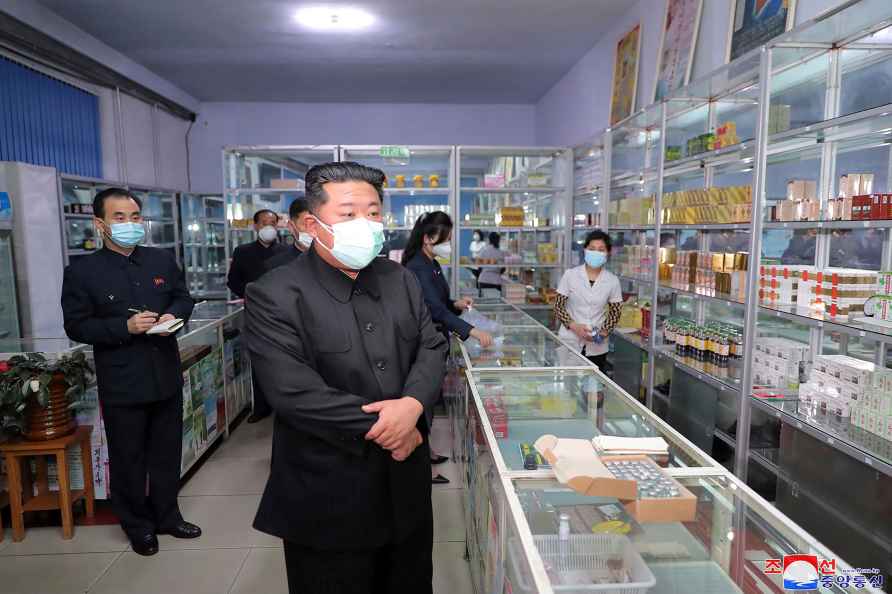 [Pyongyang: FILE - In this photo provided by the North Korean government, North Korean leader Kim Jong Un, center, visits a pharmacy in Pyongyang, North Korea on May 15, 2022. Independent journalists were not given access to cover the event depicted in this image distributed by the North Korean government. The content of this image is as provided and cannot be independently verified. Korean language watermark on image as provided by source reads: "KCNA" which is the abbreviation for Korean Central News Agency. /PTI] Seoul, May 17 : North Korea has remained unresponsive for the second day to South Korea's attempt to offer dialogue on Covid-19 medical supplies and health care cooperation, a government official said here on Tuesday. The South's Ministry of Unification had sought to deliver a related fax message to the North on Monday through their liaison office, reports Yonhap News Agency. It is seeking to hold working-level consultations on the ongoing epidemic in the impoverished neighbour and assistance in medical supplies, including vaccines, masks and test kits. The two Koreas held their routine phone call at 9 a.m. Tuesday, but Pyongyang has not expressed its intention to accept the message yet, according to the Unification Ministry official. "As North Korea is aware of our stance on cooperation in disease prevention, our government will wait for the North's response without pressing it," he said, stressing that the North will need time to review whether to accept the message. If it receives a response from Pyongyang, the Ministry will take a "practical and realistic" approach to review various ways to hold the working-level consultations, including an online video conference, the official said. North Korea has reported a total of more than 1.48 million fever cases and 56 fatalities since it confirmed the Covid outbreak on May 12. /IANS

London, June 16 : Apple is set to face another class-action lawsuit seeking damages worth $935 million in the UK over intentionally slowing down the performance of older iPhones to encourage customers […]