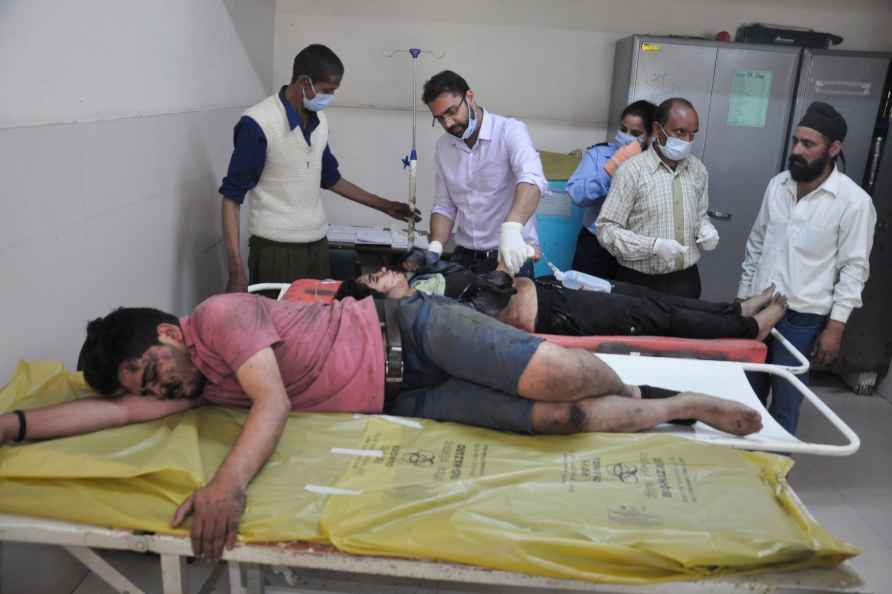 [Kullu: Injured undergo treratment at the Regional Hospital Kullu after a tourist car fell into a gorge, near the Ghiagi area in Kullu district, Monday, May 16, 2022. At least 4 people were killed while 3 others sustained injuries, according to officials. ( /PTI] Peshawar, May 16 : The killing of the two Sikh men in Peshawar is the latest in a series of targeted attacks on the community which continues to live under mounting fear. On Sunday morning, Saljeet Singh, 42, and Ranjeet Singh, 38 were gunned down by unidentified assailants in the city's Bata Tal bazaar, reports The Express Tribune. The two assailants were riding a motorcycle when they opened fire on the victims, who owned spice shops in the bazaar. The men died on the spot. Left shocked by the latest attack on the community, leaders of the Sikh community led a protest rally from the historic Dabgari gurdwara to condemn the attack and press the government to bring an end to the sustained killings, The Express Tribune reported. A large number of people poured into the streets demanding justice. The Hashtnagri road, packed with protesters, remained blocked for three hours on Sunday. The demonstrators called on the government to provide security to the minority community and take effective steps to prevent targeted killings. Sikh community leader Sahib Singh told The Express Tribune that the incident was very shocking. He recalled that a compensation package of 3 million PKR per head had been given to the victims of the March 3 Kucha Risaldar imambargah suicide attack which killed 66 and injured 130 worshippers in Peshawar, demanding the same should be given to the poor families of the victims. He lamented that the government has failed to give any compensation package to the family of Sikh hakeem Satnam Singh who was killed inside his clinic in the Faqirabad area in September last year. The Islamic State terror group's Khorasan chapter (IS-K) had claimed responsibility for Sunday's attack. The police claimed in December last year to have killed three IS-K commanders in the city insisting the militants were involved in the murder of the Sikh hakeem and other attacks, The Express Tribune reported. However, according to sources in the Khyber Pakhtunkhwa police, an alert had been issued to the Sikh community in Peshawar, Swabi, Buner and Malakand in the wake of a slew of attacks, following which the beleaguered community was forced to adopt security measures. Meanwhile, community leaders at Sunday's protest rally said the terror attacks have taken a severe toll on their livelihood and business prospects in the provincial capital. /IANS

Two policemen killed after fire exchange with suspect in Los Angeles
[Atalaia do Norte: A federal police officer escorts a suspect towards a river in the area where Indigenous expert Bruno Pereira and freelance British

Will China be successful in reenergising its ties with ASEAN?
[Chisinau: France's Emmanuel Macron speaks to the media during a conference at the Presidential Palace in Chisinau, Moldova, Wednesday, June 15, 2022.

Ranchi, June 14 : Cracking down on those involved in the violence that took place in Ranchi last Friday (June 10), the police have put up their hoardings with the photographs, their names and addresse […]

Drunk man hops on to moving police vehicle in Hyderabad

Hyderabad, June 14 : A man, who was in inebriated condition, created ruckus in Asif Nagar area of Hyderabad by climbing on to a moving police patrol car. The incident occurred late on Monday nig […]

Panaji, June 14 : Former director of CBI, M. Nageshwar Rao on Tuesday said the Goa government must pass the requisite law in the assembly and send it to the Central government to prevent religious con […]