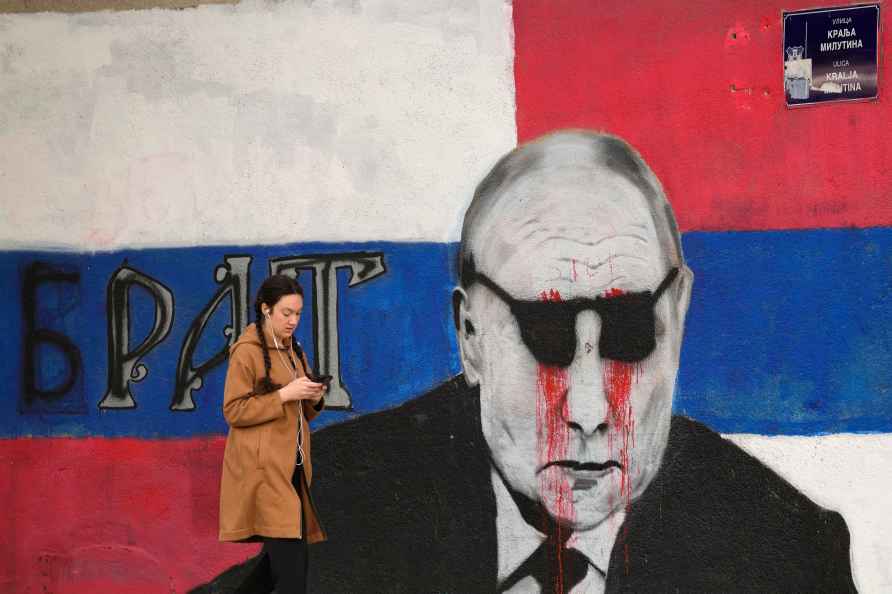 [Belgrade: A woman passes by a mural depicting the Russian President Vladimir Putin that reads: ''Brother'' vandalized with paint, in Belgrade, Serbia, Saturday, May 7, 2022. Despite having to pay a big price Serbia for not introducing sanctions to Russia, Serbia will not do it , Serbian President Vucic said, but despite that the country will stay on its path toward the EU. /PTI] Moscow, May 7 : Russia is already under unprecedented sanctions due to its invasion of Ukraine and now the European Union (EU) could target Alina Kabaeva, a politician, media boss, former Olympic gymnast, and, if the rumours are true, President Vladimir Putin's girlfriend and mother to some of his children, according to a media report. The sanctions imposed by the EU and others are designed to punish those closest to Putin -- the oligarchs, politicians and other officials said to have benefited from their proximity to the President, said the BBC report. Last month, the US and UK imposed sanctions on Putin's daughters Maria Vorontsova and Katerina Tikhonova. They are his children with former wife Lyudmila. Until now, Kabaeva has escaped, despite her reported status. She might have felt something was coming: an online petition in March demanded her expulsion from her residence in Switzerland, says the BBC report. Sources have confirmed to the BBC that she is on the latest list of individuals to be sanctioned by the EU. The Russia, leader has always been intensely private. When asked about his private life, he has tended to brush off the queries. He has, though, explicitly denied a relationship with Kabaeva. In 2008, the Moskovsky Korrespondent newspaper reported that he was planning to divorce his wife Lyudmila and marry Kabaeva. Both rejected the story and soon after, the authorities shut the newspaper down. Putin and Lyudmila however, announced their split five years later, the BBC reported. At the time, the President denied he was involved with Kabaeva, who was transitioning from a successful sporting career to one in politics. There are rumours that they also have children together, although reports vary on how many, BBC reported. A Swiss newspaper reported that Kabaeva had a boy in 2015 at an exclusive clinic near Lake Lugano, and another boy at the same place in 2019. But The Sunday Times and The Wall Street Journal said she had twins in 2019 in Moscow although they disagree on how many children she has had. The Kremlin denies such reports. Back in 2015, Putin's spokesman said "information about the birth of a baby fathered by Vladimir Putin does not correspond to reality". Such is Putin's guarded nature. In public, he's never mentioned the names of the children he has with Lyudmila, other than to say he has two adult daughters, the BBC reported. Kabaeva has been in and out of the spotlight since reports of her relationship with Putin emerged. There was a Vogue cover in 2011, where she wore a pricey gold dress from French fashion house Balmain. She was also a torch bearer at the 2014 Winter Olympics in Sochi. More recently in April, she appeared at a junior gymnastics festival in Moscow, quashing suggestions she was in hiding. Since the Ukraine war began, there have been calls for her to face sanctions. The Wall Street Journal has suggested that the US is reluctant to sanction Kabaeva, for fear it may be deemed "so personal a blow" to Putin that it may escalate tensions further. /IANS

Congress workers detained outside ED office
[New Delhi: Police personnel outside the AICC headquarters during a protest march by the Congress party over ED's summoning of Rahul Gandhi in the Nat

Where is the FIR, Chidambaram asks BJP
[New Delhi: Police stop Congress workers during a protest march at the AICC ahead of Rahul Gandhi's second appearance before the Enforcement Directora

Los Angeles, June 14 : Filmmaker Justin Lin is attached to direct an upcoming film adaptation of the popular manga 'One Punch Man'. Lin will direct the film based on a script from 'Venom' and 'J […]