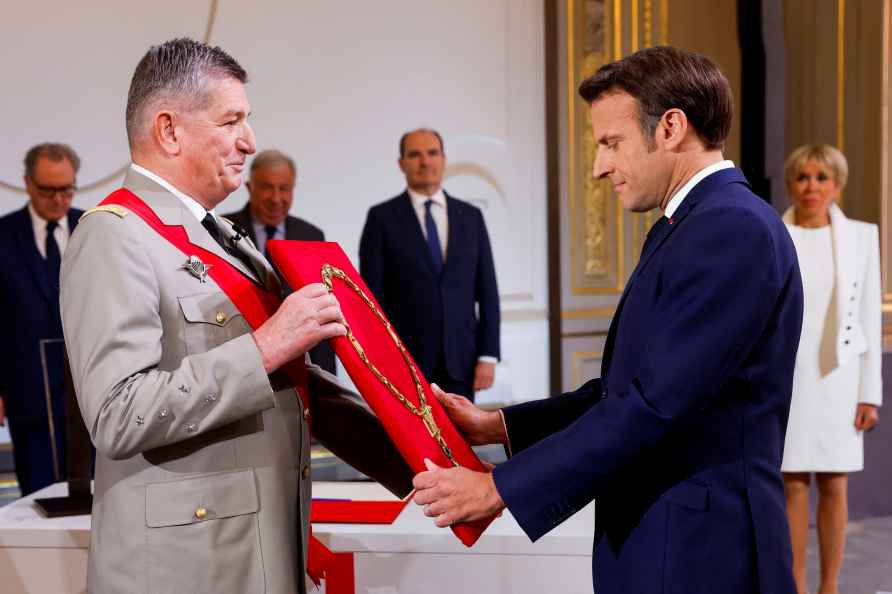 [Paris: France's Military Chief of Staff to the presidency Benoit Puga, left, and French President Emmanuel Macron attend the ceremony of his inauguration for a second term at the Elysee palace, in Paris, France, Saturday, May 7, 2022. Macron was reelected for five years on April 24 in an election runoff that saw him won over far-right rival Marine Le Pen. /PTI] Thiruvananthapuram, May 7 : On the surface, the Thrikkakara bypoll appears to be a fight between the ruling CPI-M's Joe Joseph and Congress' Uma Thomas. But in reality, it is a clash of the two heavy weight leaders -- Left Democratic Front convenor E.P. Jayarajan and his arch rival Congress president K. Sudhakaran. While Joseph is a renouned cardiologist, Uma Thomas is the widow of two-time Thrikkakara legislator and Congress veteran, P.T. Thomas. Both hail from Kannur and have been at logger heads for the past three decades. The two have been rivals since the 90s when both were frontline leaders of their respective parties in Kannur and it took a turn for the worse after Jayarajan, a party legislator and the powerful CPI-M Kannur district secretary, was shot at and injured in a train in 1995. Since then, Jayarajan and the CPI-M have alleged that Sudhakaran was the prime conspirator, but a court in Andhra Pradesh gave him a clean chit. Time and again they have indulged in regular verbal duels with Jayarajan claiming that he has a bullet stuck in his neck and Sudhakaran saying that he is prepared to bear all the medical expenses to prove him wrong. This bypoll is crucial for both as it's the first election after they took over top positions in their respective parties. Both the leaders are now stay put at Ernakulam, which has now become the nerve centre of all politicking. Sudhakaran at the moment is a proud partyman as the Congress took everybody by surprise by announcing their candidate Uma in a few hours after the Election Commission announced the date of the by-election. "We wish to invite the Left for an open debate on its contribution to the overall development the state, as it only created road blocks to all major projects. The politics in Thrikkakara is the politics of the Congress and all along we have won here and this time too, it will be a cakewalk for us," said Sudhakaran. Jayarajan, who is overseeing all the issues with regards to the by-election, said they have been able to field the best candidate a medical professional with a strong social commitment which was seen during the 2018 floods and the Covid-19 pandemic. "This time we are going to get a firm hold and we will win Thrikkakara for the first time. The people in the state have given us a second term for the development agenda that we placed before them. Here also, our development programme will be the key point of discussion and hence we know we will be able to win hands down," he said. Political developments are going to intensify in the days to come and the Left feels, they will edge forward in a big way with the arrival of their star campaigner Chief Minister Pinarayi Vijayan, presently convalescing at the Mayo Clinic in the US. "We expect him (Vijayan) to be inaugurating their election convention on May 12," said Jayarajan. So, as the poll date nears, the battle of the two battle-scarred Kannur veterans is also likely to intensify. /IANS

Kyle Jamieson ruled out of day four action against England due to lower back scans
[Nottingham: New Zealand's Daryl Mitchell, right, stands with batting partner Tom Blundell to watch a review of Blundell during the fourth day of the

San Francisco, June 14 : Tech billionaire Elon Musk has said that its electric vehicle company Tesla had a 'very tough quarter' and needs to rally. According to the auto-tech website Electrek, o […]

Group of women beat up pizza chain employee in Indore

Indore, June 14 : A video has gone viral on social media showing a group of four women mercilessly beating up a young female employee of a pizza chain in Indore, despite repeated pleas by the latter t […]

Chris Evans, from right, Keke Palmer, and Taika Waititi pose for photographers upon arrival for the premiere of the film 'Lightyear' in London, Monday, June 13, 2022. /AP-PTI […]