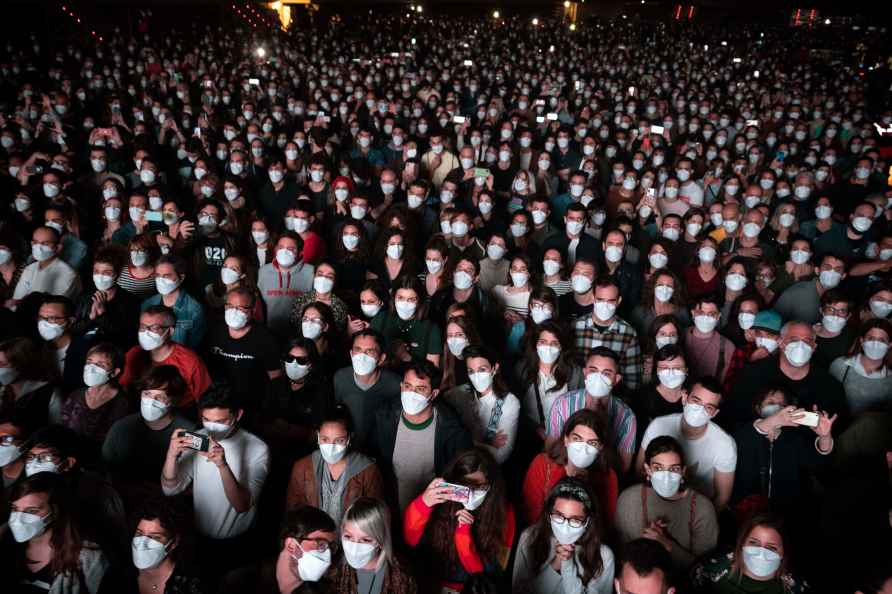 Seoul, May 2 : Most Seoul citizens still wore face masks despite the lifting of the outdoor mask mandate on Monday, as many were still wary of the Covid-19 pandemic. After over 1 year of mandating a mask anywhere outside homes, South Korea ended the outdoor mask rule starting earlier in the day in one of the most dramatic rollbacks of the country's Covid-19 restrictions, reports Yonhap News Agency. Masks are no longer mandatory in outdoor places, except when people attend gatherings of 50 or more or sports and cultural events with potentially larger crowds. The mask mandate for indoors and public transport, however, remains in place. Kang Hyun-doo, a 77-year-old, was still wearing a mask while jogging at a park in Seoul's financial district of Yeouido, voicing concerns that easing the rule may be "premature". "I think it is wrong to lift the outdoor mask mandate when the ratio of infected people per population is still very high," Kang said. Seoul's central district of Gwanghwamun painted a similar picture as citizens headed out to eat together with most of them wearing face masks. Majority of workers kept their masks on even after leaving their office buildings. Kim Joon-hwan, a 37-year-old banker working in the capital's Euljiro area, said he would continue to wear a mask even if restrictions are eased further. "I am used to wearing a mask ... it has become like a habit," he said. "I am doing this for the sake of public interest." Another office worker, meanwhile, hailed the eased rule, saying that the latest move is in line with many countries that eased mandatory measures earlier. Not having to wear a mask was also "very liberating and freeing" for 31-year-old Park Hyun-ah who had her mask off while leaving for work in Seoul's eastern Songpa Ward. Park said she believed most people were still wearing masks outdoors out of habit and that people will eventually take off their masks sooner or later. South Korea had already removed most of its pandemic restrictions last month, including a 10-person limit on private gatherings, a midnight curfew at restaurants, coffee shops and bars and a ban on food consumption at movie theatres, concert halls and indoor sports venues. Yet, the government recommends mask wearing when it is difficult for people to keep a 1-metre distance from each other at gatherings and in circumstances where lots of droplets of saliva could be expelled, such as shouting and singing. The mask mandate is also highly recommended for those who tested positive for Covid or who are at high risk of infections. /IANS

Canberra, June 11 : The Australian government on Saturday agreed to pay a French shipbuilder A$830 million after tearing up a submarine contract. Prime Minister Anthony Albanese said the governm […]

Phnom Penh, June 11 : Cambodia has reported 1,354 dengue fever cases in the first five months of 2022, up more than 100 per cent compared to the same period last year, the Health Ministry said in a st […]

New Delhi, June 11 : A Delhi Court has summoned Huawei India CEO Li Xiongwei and four other top officials on a complaint of the Income Tax department stating the "willful failure" of providing account […]