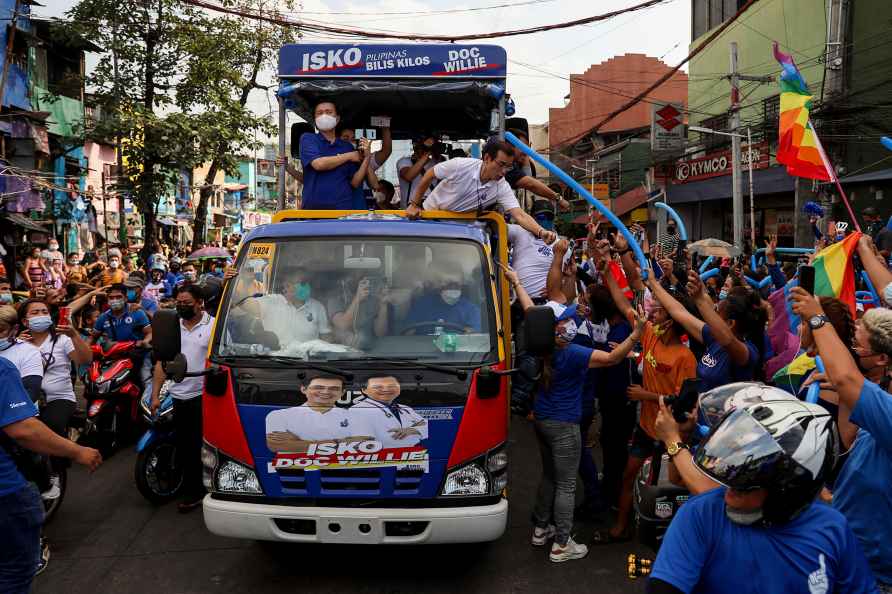 Manila, May 2 : Less than 10 days before the national and local elections in the Philippines, presidential aspirants are campaigning the archipelago, wooing voters with plenty of promises despite the Covid-19 threat. As the election campaign enters its final days, sloganeering and mudslinging intensify in a desperate effort to destroy their rivals, Xinhua news agency reported on Monday. The battle has now shifted to drone photography to show which political rally has an enormous number of attendees. Some candidates' children and supporters have resorted to a house-to-house campaign to personally meet the voters. Presidential aspirants bring singers and actors to entertain the crowd on the campaign trail. The candidates rarely or superficially discuss how they plan to deal with ballooning debts or how to revitalise the pandemic-hit economy and stamp out its decades-old corruption, widespread poverty, and rising food prices. Over 65.7 million Filipinos are expected to vote on May 9 to elect a new President, Vice President, 12 of the 24 members of the Senate, and members of the House of Representatives. The Commission on Elections (Comelec) data showed that over 18,000 congressional and local positions are up for grabs. According to the latest opinion surveys, Ferdinand Marcos Jr., 64, son of former President Ferdinand Marcos, is favoured to win with a majority of the vote in the election over his main rival, incumbent Vice President Maria Leonor Robredo, 57. Other candidates trail behind the two front-runners, including boxing icon-turned-senator Emmanuel Pacquiao, 43; Manila City Mayor and former actor Francisco Domagoso, 47; and former-national-police-chief-turned senator Panfilo Lacson, 73. The new President however, will have a difficult task ahead. Philippine Statistics Authority data showed that 23.7 per cent of the country's nearly 110 million population live in poverty. The unemployment rate peaked at 17.6 per cent in April 2020 amid the Covid-19 pandemic and has fallen to 6.4 per cent in February this year, still above the pre-pandemic level of 5.1 per cent in 2019. More people are expected to get jobs as the government eases Covid-19 restrictions to allow more businesses to resume operations or increase capacity. Since February, the government has allowed fully vaccinated international travellers to enter the country, boosting tourism and employment in the services sectors. Tourism's share of gross domestic product (GDP) fell to 5.4 per cent in 2020 from 12.8 per cent in pre-pandemic 2019. Tourism, a crucial source of jobs, had accounted for 13.6 per cent of the country's total employment in 2019. From 2020 to this January, the Department of Finance said the Philippines had borrowed 1.3 trillion pesos ($25 billion) to fund the efforts against Covid-19. According to Asian Development Bank (ADB), the Philippine government's debt-to-GDP ratio widened to 60.5 per cent in 2021 from 54.6 per cent in 2020. Despite the challenges ahead, the recovery of the economy is forecast to gain traction, fuelled by strengthening domestic investment and consumption. The government's GDP target for 2022 is between 7-9 per cent. The ADB forecasts a 6.0 per cent GDP growth in 2022 and 6.3 per cent in 2023. The country's GDP grew by 5.6 per cent in 2021 after the economy contracted 9.6 per cent in 2020 due to the pandemic. /IANS

IANS CVoter Snap Poll: Overdose of nationalism behind failure of 'Samrat Prithviraj'
New Delhi, June 11 : 'Samrat Prithviraj' was touted as one of the biggest blockbusters to come out of Bollywood in 2022. With Covid lockdowns and rest

Standalone: Peacock and parrots at a garden

China's Zheng Siwei, Right, and Huang Yaqiong hold their trophies and medals during a victory ceremony after defeating France's Thom Gicquel and Delphine Delrue during their mixed doubles final match […]