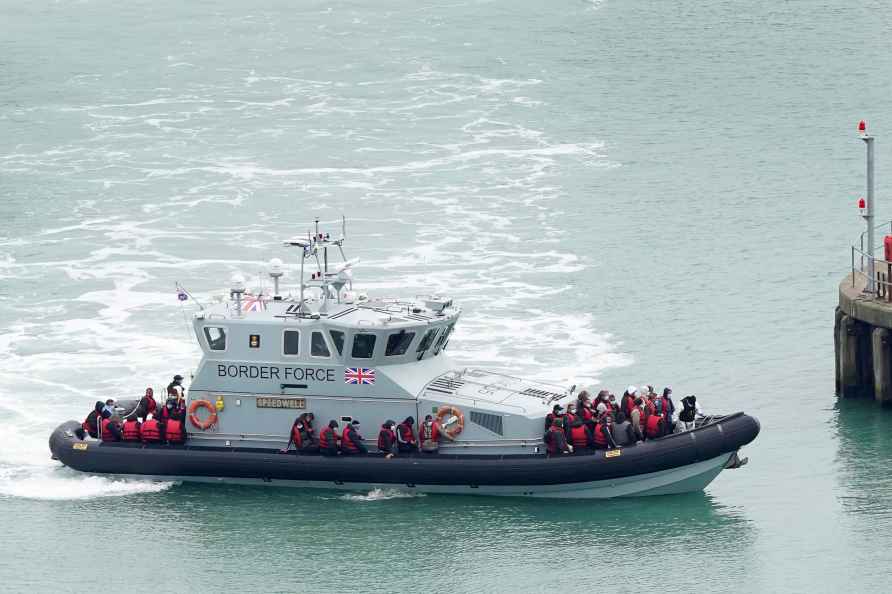 [Dover: A group of people thought to be migrants are brought in to Dover, Kent, onboard a Border Force vessel, following a small boat incident in the English Channel, Monday May 2, 2022. Hundreds of people have crossed the English Channel in small boats in the last 24 hours, British officials said Monday, after more than a week in which no crossings were reported. The Ministry of Defense said 254 people arrived on the English coast in seven boats from northern France on Sunday, and more people were brought ashore by British lifeboats on Monday. /PTI] Wellington, May 2 : New data released on Monday revealed that sea levels in New Zealand were rising some 20 to 30 years faster than previously expected. Based on current international emissions reduction policies, global sea levels are expected to rise about 0.6 metres by the year 2100, reports Xinhua news agency. However, for large parts of New Zealand this will double to about 1.2 metres due to ongoing land subsidence, said Professor Tim Naish from the Victoria University of Wellington, co-leader of the NZ SeaRise programme. "We have less time to act than we thought," Naish said. What may be a real surprise to people is that for many of New Zealand's most populated regions, such as Auckland and Wellington, "this unavoidable rise is happening faster than we thought." "Vertical land movements mean that these changes in sea level may happen 20 to 30 years sooner than previously expected," said Richard Levy from GNS Science and Victoria University of Wellington, co-leader of NZ SeaRise. For many parts of New Zealand's coast, 30 cm of sea-level rise is a threshold for extreme flooding, above which the 100-year coastal storm becomes an annual event, Levy said. NZ SeaRise, a five-year research programme funded by the government, brings together 30 local and international experts from universities and research institutes to improve projections of sea-level rise in New Zealand. On Monday, the programme released location-specific sea-level rise projections out to the year 2300 for every 2 km of the coast of New Zealand. These projections can be accessed through a new online tool. For the first time, New Zealanders will be able to see how much and how fast sea levels will rise along their own stretch of coast and in their neighbourhood, according to the programme. The new projections are being incorporated into the next Ministry for the Environment guidance for local governments' work on coastal hazards and climate change, Levy said. Climate change and warming temperatures are causing sea levels to rise, on average, by 3.5 mm per year. This sea-level rise is caused by thermal expansion of the ocean, and the melting of land-based glaciers as well as the Greenland and Antarctic ice sheets. However, local sea-level rise around the coast of New Zealand is also affected by the up-and-down movements of its land. "We are very aware when these vertical land movements occur in large jumps during earthquakes, but less obvious to us all is that smaller shifts occur continuously in between large seismic events," said a statement of the programme. "These small but continuous changes add up, and in areas that are going down (subsiding) the annual rate of sea-level rise can double," it said, adding the programme has connected this vertical land movement data with the climate-driven sea-level rise to provide locally-relevant sea-level projections. Levy called on property owners, councils, infrastructure providers and others to understand how sea levels will change in the coming decades so that they can consider risks associated with flooding, erosion and rising groundwater. Sea-level rise can be kept to a minimum by enacting policies to meet the Paris Agreement targets to limit global warming by 2100 to between 1.5 to 2 degrees Celsius. "The sooner we act, the more effective that action will be," said Naish. Climate Change Minister James Shaw said later this month New Zealand will publish its first ever plan to cut emissions in every part of the country. /IANS

Sea levels rising twice as fast in New Zealand
[Dover: A group of people thought to be migrants are brought in to Dover, Kent, onboard a Border Force vessel, following a small boat incident in the

No individual can be forced to get vaccinated, govt vaccine policy not arbitrary: SC

New Delhi, May 2 : The Supreme Court on Monday said that no individual can be forced to get vaccinated and added that the current Covid-19 vaccine policy of the government is not arbitrary. A be […]

New Delhi: Muslims offer prayers at the Jama Masjid on the occasion of Eid-ul-Fitr, in old Delhi, Tuesday, May 3, 2022. Muslims across the world celebrate Eid with zeal and grandeur. ( /PTI […]

Seoul, May 2 : Most Seoul citizens still wore face masks despite the lifting of the outdoor mask mandate on Monday, as many were still wary of the Covid-19 pandemic. After over 1 year of mandati […]

Without Bravo in Playing XI, I felt I had to take it on my shoulders, says Mukesh Choudhary

Pune, May 2 : Chennai Super Kings' left-arm pace bowler Mukesh Choudhary has emerged as the unlikely hero for the four-time IPL champions, with the 25-year-old pairing up with the likes of Dwaine Pret […]