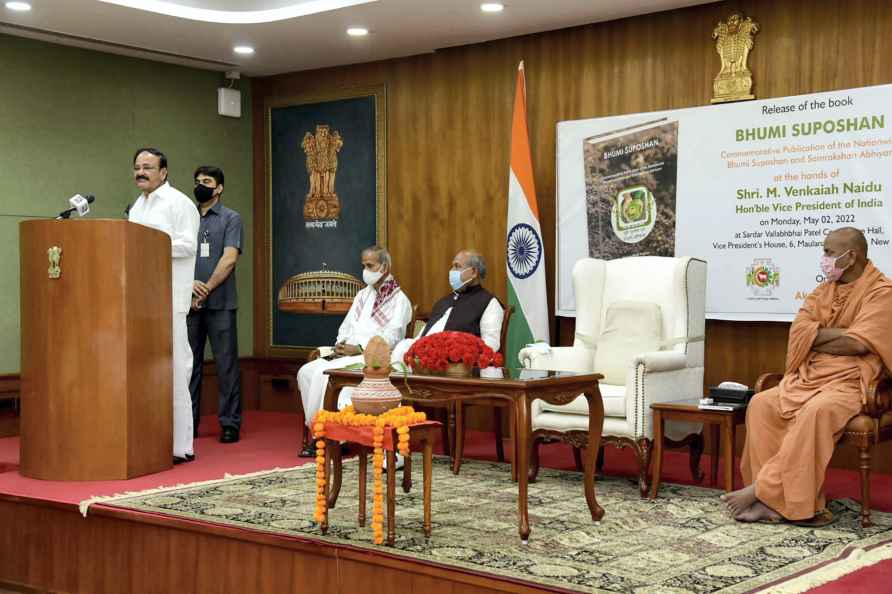 [**EDS: HANDOUT PHOTO MADE AVAILABLE FROM VP OFFICE** New Delhi: Vice President M. Venkaiah Naidu speaks during the release of the book 'Bhumi Suposhan' at Upa-Rashtrapati Nivas, in New Delhi, May 2, 2022. Union Minister of Agriculture and Farmers Welfare Narendra SinghTomar is also seen. ( /PTI] New Delhi, May 2 : Vice President and Rajya Sabha Chairman M. Venkaiah Naidu on Monday administered oath to three newly-elected of the Aam Aadmi Party (AAP) MPs. The three are Sanjeev Arora, Ashok Mittal and Raghav Chadha, who were elected in the recently concluded biennial election from Punjab. During the oath taking ceremony, Naidu advised the new members to go through publications, including 'Rajya Sabha at work', 'Practice and Procedure of Parliament' by Kaul and Shakdher, Members Handbook', 'enable them to become conversant with the practice and procedures of the House and enrich their knowledge about its functioning. Minister of State for Parliamentary Affairs, A.V. Muraleedharan, Secretary General P.C. Mody and other senior officers of the Rajya Sabha Secretariat were also in attendance. /IANS

It's skull cap versus saffron shawls in K'taka now

Bengaluru, June 11 : When the hijab crisis is settling down in Karnataka, it is now the skull cap versus saffron shawls in the state. A section of Hindu employees of the state-owned Bengaluru Me […]

Two killed during demolition of old building in Telangana

Hyderabad, June 11 : Two workers were killed while two others sustained injuries in an accident during demolition of an old building in Telangana's Warangal town on Saturday. The incident occurr […]

Chennai, June 11 : Chennaiyin FC have inked a two-year deal with defender Gurmukh Singh ahead of the next season of the Indian Super League (ISL). The Jalandhar-born footballer will join the two […]