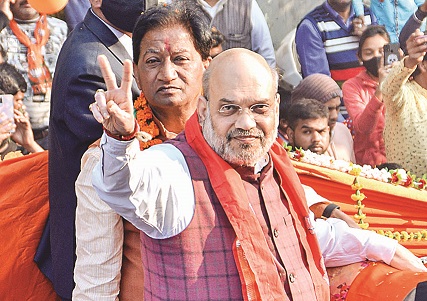 Kolkata, May 5 (IANS) The political situation in West Bengal will soon be such that the local administration will be forced to assist the Border Security Force (BSF) to check illegal infiltration and cross-border smuggling along the India-Bangladesh border areas in the state, according to Union Home Minister Amit Shah. "I understand that without the help of the local administration it is extremely difficult to check illegal infiltration and cross border smuggling. However, I would like to assure you that the political situation here will be such that you will get that help. Pressure from the people will force the local administration to provide that assistance," Shah said, while addressing a programme on the occasion of the foundation stone laying ceremony of Maitri Sangrahalaya (museum) located at border outpost Haridaspur in North 24 Parganas district of West Bengal on Thursday afternoon. Shah's comments come at a time when the West Bengal and Union governments are at loggerheads over the extension of the BSF's authority up to 50 kilometres from the borders with Pakistan and Bangladesh. A notification issued in this regard by the Union Home Ministry empowered BSF personnel to conduct search operations, arrest suspects and make seizures within 50 kilometres from the borders. Shah said that Prime Minister Narendra Modi is aware of the difficulties faced by the BSF personnel posted at the borders. "So, the Union government is trying to come out with schemes so that the personnel posted at the borders get maximum opportunity to spend time with their family members. The Union government is also making arrangements to minimise the difficulties of security personnel posted at the borders," Shah added. West Bengal Trinamool Congress General Secretary, Kunal Ghosh said, "The Union Home Minister is trying to convert BSF into a cadre wing of the BJP. He should refrain from doing so." Earlier on Thursday, Amit Shah inaugurated six floating border outposts of the BSF at Hingalganj in North 24 Parganas district and also flagged off a boat ambulance there. --IANS

Edgbaston, July 5 : Chief Executive at Edgbaston, Stuart Cain, has been forced to issue a public apology on behalf of Warwickshire County Cricket Club and Edgbaston Stadium after several Indian suppor […]

New Delhi, July 5 : Flexible workspace provider WeWork reportedly exposed the personal information and selfies of thousands of people who visited its co-working facilities in the country, a cyber-secu […]