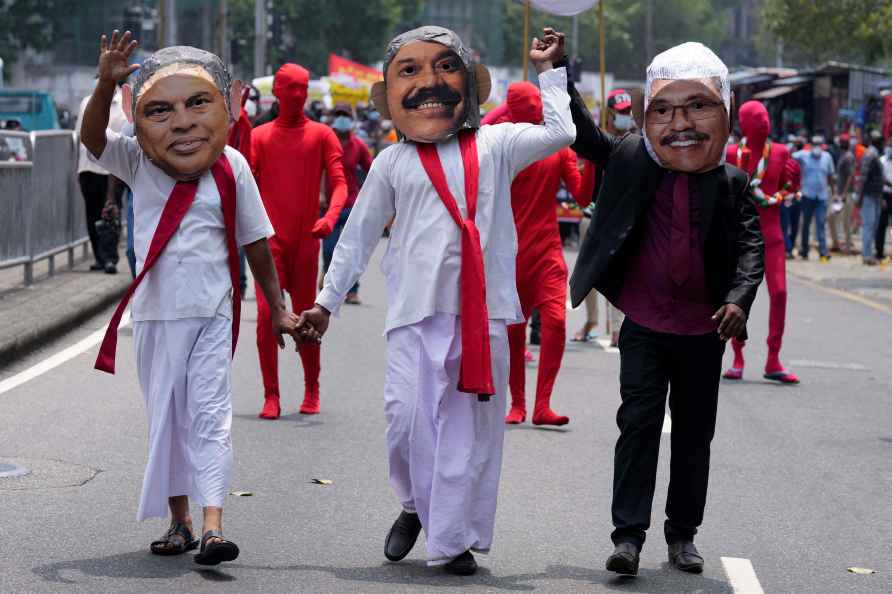 Colombo, May 1 : The Sri Lankan government is taking various approaches to address current challenges faced by the country amid the ongoing economic crisis, the country leaders said in their messages on the International Labour Day. In the past three years, the group that faced the most serious challenges in Sri Lanka is the working class, and the day-to-day challenges they face are even more intense today, Xinhua news agency quoted President Gotabaya Rajapaksa as saying. "The government is taking various approaches to liberate the people from this situation and alleviate the oppressive nature of the situation," he said. The President in his message once again invited the leaders of all political parties to come to a consensus on behalf of the people to overcome the challenge faced by the country. The government is currently taking all possible measures to manage the economic crisis and is seeking the necessary support at the local and international levels, Prime Minister Mahinda Rajapaksa said in his message. Protesters in the country have been calling for immediate measures to be taken by the government to solve the current economic crisis featuring shortages of foreign exchange, fuel and other essential supplies as well as a rising inflation. /IANS

Jaipur, Aug 13 : Nearly one crore school children in Rajasthan created a world record by singing patriotic songs at the same time under the 'Azadi Ka Amrit Mahotsav' campaign to celebrate the occasion […]

New Delhi, Aug 13 : The National Investigation Agency (NIA) has said that they have arrested the tenth accused in connection with the killing of pharmacist Umesh Kolhe (54) in Amravati district of Mah […]

New Delhi, Aug 13 : The Income Tax (I-T) Department has said that it had carried out a search operation on the premises of a Jhansi-based business group, engaged in civil contract and real estate deve […]

Bengal BJP to march to Nabanna on Sept 7 protesting corruption

Kolkata, Aug 13 : West Bengal BJP will organise a march to the state secretariat Nabanna on September 7 over the issue of corruption at all levels in the state government, demanding the immediate resi […]