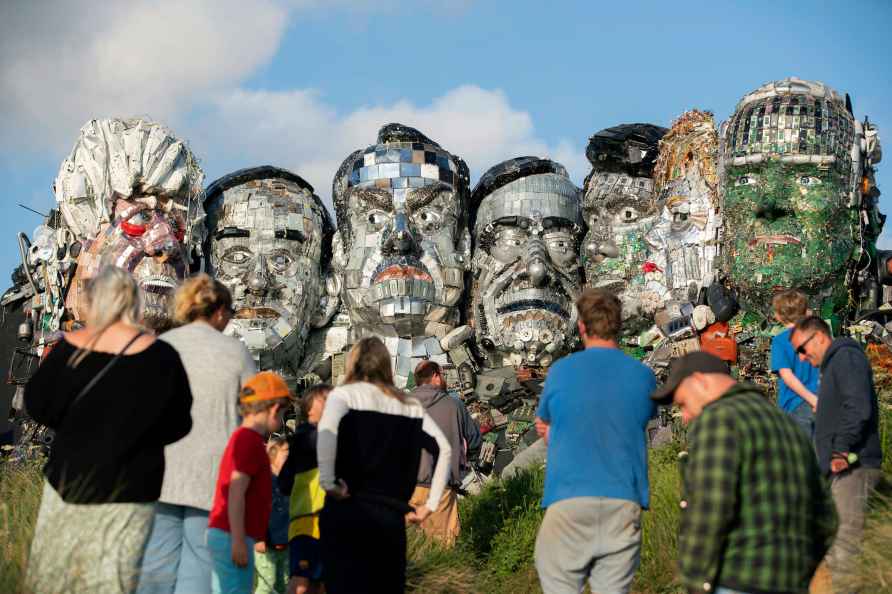 Patna, May 1 : Vimal Singh, a farmer of Samartha village in Bihar's Samastipur district is nowadays learning the skills of flying drones for improving the production of crops in his 3.5 acre land. "The unmanned aerial vehicle is helping farmers like us for the mapping of my actual agricultural field followed by spraying pesticides as well as soil and crop nutrients with minimum cost which has not only increased our production of Rabi crops but also our earning," Singh said. Bipin Rai of Vishnupura village in Samastipur also shared a similar experience. He says: "In a traditional way of farming, it is not easy to calculate moisture of the soil. The drone allows us to read the actual status of land for seeding. Moreover, it spreads the same quantity of pesticides and soil nutrients in every corner of the land. Overall, it is a fruitful experience for us which is increasing our earning and reducing our expenses." "In the last few months, the scientists and engineers of Indian Council of Agriculture Research (ICAR) and Global Indian Scientists and Technocrats (GIST) visited our villages. They have interacted with us and learnt about our traditional methods of farming. We have shared our operational methods of farming. We are generally using a manual method of farming which requires manpower. They have given us tips on advanced levels of scientific farming through drone technology which is generally used in developed countries of Europe and the US," Rai said. Rahul Paswan of Samartha village said: "I have 7 acres of land which I have used for wheat crops and managed to earn Rs 2.25 lakh net profit. This is more than Rs 1 lakh extra thanks to the drone technology which has reduced my farming expenses. The production of crops has almost doubled." Pankaj Kumar Gupta, a researcher in Waterloo university Canada, who recently visited Samartha and Vishnupura villages, said: "The farmers of Samastipur adopted the technology that we have shared with them in the last few months, especially drone technology of farming. Drones are equipped with many cutting edge technological features, including multi-spectacle photo and video cameras and thermal sensors that can be helpful for the monitoring and analyzing field moisture, fertigation, planting, harvesting and many other assignments apart from spraying of pesticides and seeding without any labour lost." "It would be a great challenge for us to trigger socio-economic changes in the hinterland of Bihar with the latest technology. Drone technology is the first step for mapping and planning the agricultural land which is considered as the most fertile land in the whole indo-gangetic belt," Sharad Mohan, a US-based technocrat. During the visit of these places, GIST and ICRA officials largely focused on estimation of natural resources and development of some low cost hydrological structures, modern drainage plans to control water-logging in the district of North Bihar. Water-logging during monsoon season is a regular feature in North Bihar. The joint efforts of the GIST and ICAR also planned to demonstrate micro biomes for the integrated management of ground water, soil health, and public health in and around the targeted zone. "Multi-spectacle cameras and sensors installed on drones manage to detect deceased plants at micro level. Following that farmers and officials would take remedial measures much in advance which are not only helpful in increasing quantities but also quality of the crops as well,' said A.K. Singh, Deputy Director General of ICRA. "The scientific accurate estimation would also help the government to evaluate compensation of crop loss due to natural calamity," Singh said. High tech mechanisation like the use of drones for farming would enhance rural entrepreneurship and reverse migration in the rural areas of Bihar," says Arun Kumar Pandey, an advisor of drone federation of India. The use of drone technology for farmers was also mentioned in a speech of Prime Minister Narendra Modi in 2021. Moreover, the Central and state governments are providing subsidies on drones for agriculture purposes. The officials are hopeful that agri-tech could attract youths of the rural areas to learn low cost scientific methods of farming. /IANS

Habitats Trust signs MoU with UP to conserve wildlife
Lucknow, May 31 : The Habitats Trust, founded by HCL Technologies Chair Roshni Nadar Malhotra, has signed an MoU with the Uttar Pradesh Forest Departm

Partly cloudy sky, light rain/thundershowers likely in J&K
Srinagar, May 30 : Weather remained inclement in Jammu and Kashmir during the last 24 hours as the Meteorological (MeT) department said on Monday tha

United Nations, June 1 : Suffering a devastating drought that kills millions of livestock in the Horn of Africa, the threat of starvation looms in parts of the region, UN humanitarians said. "Me […]

Los Angeles, June 1 : More than 112,000 child Covid-19 cases were reported in the US during the past week, a doubling of case counts from the four weeks prior, according to the latest report by the Am […]

Beijing, June 1 : Beijing reported five locally transmitted Covid-19 cases, including four among those quarantined for observation and one from community screening, an official told a press conference […]