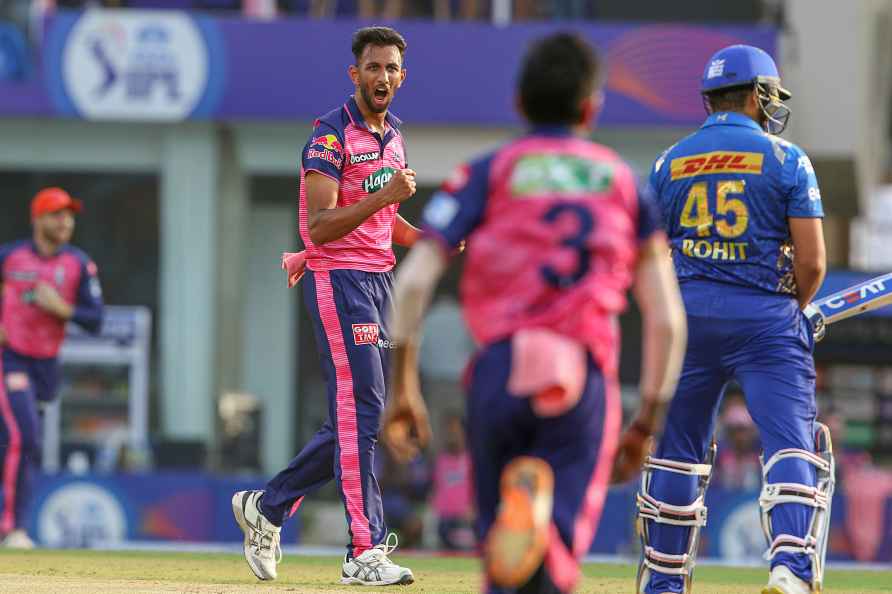 Mumbai, May 1 : A disciplined bowling performance followed by a fantastic fifty by Suryakumar Yadav (51 off 39) helped Mumbai Indians beat Rajasthan Royals by five wickets in match No 44 and end their eight-match losing streak in the ongoing IPL 2022 at the Dr DY Patil Stadium, here on Saturday. It was Mumbai's first win in their ninth game of the ongoing IPL 2022 season. On the other hand, Rajasthan are at the second spot in the points table with six wins in nine matches. After winning the toss and opting to bowl first, Mumbai Indians restricted Rajasthan Royals to 158/6 in 20 overs despite a fine fifty from Jos Buttler (67 off 52). Apart from Buttler, Ravichandran Ashwin (21 off 9) was the main contributor with the bat for Rajasthan. The likes of Devdutt Padikkal (15), Sanju Samson (16) and Daryl Mitchell (17) got good starts but failed to convert them to big innings. Chasing a modest target, Ishan Kishan showed signs of returning back to form and smashed Rajasthan pacers -- Prasidh Krishna and Trent Boult -- for boundaries and sixes to give Mumbai a flying start. With Ishan taking his chances and Rohit Sharma in the middle of a struggle, Samson threw on the experienced Ashwin in the third over. The off-spinner didn't disappoint his skipper and dismissed Rohit (2) in his very first over. Despite losing the wickets of captain Rohit early, Ishan continued his aggressive batting until Trent Boult ended the left-hander's confident stay in the middle with a short ball. At 41-2 after 5.4 overs, Mumbai were in a spot of bother but Suryakumar Yadav and Tilak Varma batted sensibly and helped their team rebuild the innings. The duo took their time to settle down and hit a few timely boundaries, taking Mumbai 75 for 2 at the halfway mark. Suryakumar and Tilak navigated past the middle-overs with superb efficiency as they didn't allow Chahal and Ashwin to pick wickets by mixing caution with aggression. During the process, Suryakumar also completed his half-century. However, soon after reaching his fifty, Suryakumar got out in the 15th over bowled by Chahal as the star batter tried to clear the long-off fence. In the very next over, Prasidh Krishna dismissed Tilak who managed a 30-ball 35. Once Suryakumar and Tilak fell, there was trouble for Mumbai but Tim David showed what he was truly picked for after warming the bench for so long. His nine-ball 20 helped the team push for that win. Pollard's wicket on the first ball of the final over added to the drama but Daniel Sams smashed a six on the first ball he faced as Mumbai chased down the target in 19.2 overs with five wickets in hand. Ravichandran Ashwin (1/21), Yuzvendra Chahal (1/33), Trent Boult (1/26), Prasidh Krishna (1/29) and Kuldeep Sen (1/29) picked one wicket each for Rajasthan. Earlier, put into bat first, openers Dedvdutt Padikkal and Jos Buttler gave Rajasthan a slow start despite getting lifelines by Mumbai fielders. It was Daniel Sams, who dropped Buttler in the 2nd over of the innings bowled by Jasprit Bumrah and then Tim David dropped a simple catch of Padikkal in the very next over. Young spinner Hirthik Shokeen finally dismissed Padikkal (15) in the 5th over to provide the first breakthrough for Mumbai Indians. Skipper Sanju Samson, who came to bat next, scored a quickfire 16 in just 7 balls with two sixes but he once again failed to carry his innings longer and got out to debutant Kumar Kartikeya, leaving Rajasthan at 54-2 after 7.2 overs. Despite losing his batting partners at the other end, Buttler tried to up the ante but he wasn't able to do it due to disciplined bowling by Mumbai and slowness of the pitch. The constant pressure from the MI bowlers dried the boundaries during the middle phase and eventually brought the wicket of Daryl Mitchell in the very first ball of the 15th over bowled by Sams. Soon, Mumbai skipper Rohit Sharma took a punt and handed the spinner Shoukeen the 16th over. Buttler smashed the youngster for four back-to-back sixes, missed the fifth ball and eventually fell on the last delivery while trying to hit another six. Ashwin came in and played a fine cameo which provided the boost to RR's innings before getting out. However, Daniel Sams bowled an incredible final over to Shimron Hetmyer, conceding just 3 runs and restricted Rajasthan to 158/6 in 20 overs. Riley Meredith (2/24), Hrithik Shokeen (2/47), Daniel Sams (1/32), Kumar Kartikeya (1/19) were the wicket-takers for Mumbai. Brief scores: Rajasthan Royals 158/6 in 20 overs (Jos Buttler 67, Ravichandran Ashwin 21; Riley Meredith 2/24) lost to Mumbai Indians 161-5 in 19.2 overs (Suryakumar Yadav 51, Tilak Varma 35; Ravichandran Ashwin 1/21) by 5 wickets /IANS

Manjrekar sees shades of Dhoni's captaincy in Pandya after IPL 2022 triumph
Mumbai, May 31 : Gujarat Titans' triumph in the 2022 edition in their debut season of the Indian Premier League (IPL) has catapulted their skipper and

Tehran, June 1 : Iran has warned Greece that neither the US nor any other third party wishes well for Tehran-Athens relations, noting bilateral ties have always been based on mutual respect, official […]

New York, June 1 : The personal savings rate, as a percentage of disposable income, fell to 4.4 per cent in April, the lowest level since 2008 in the US, according to the Commerce Department. "F […]

Fresh organic strawberries likely cause hepatitis A outbreak in the US, Canada

Los Angeles, June 1 : A multistate outbreak of hepatitis A infections in the US and Canada is likely linked to contaminated organic strawberries sold in leading grocery stores, according to the US Foo […]