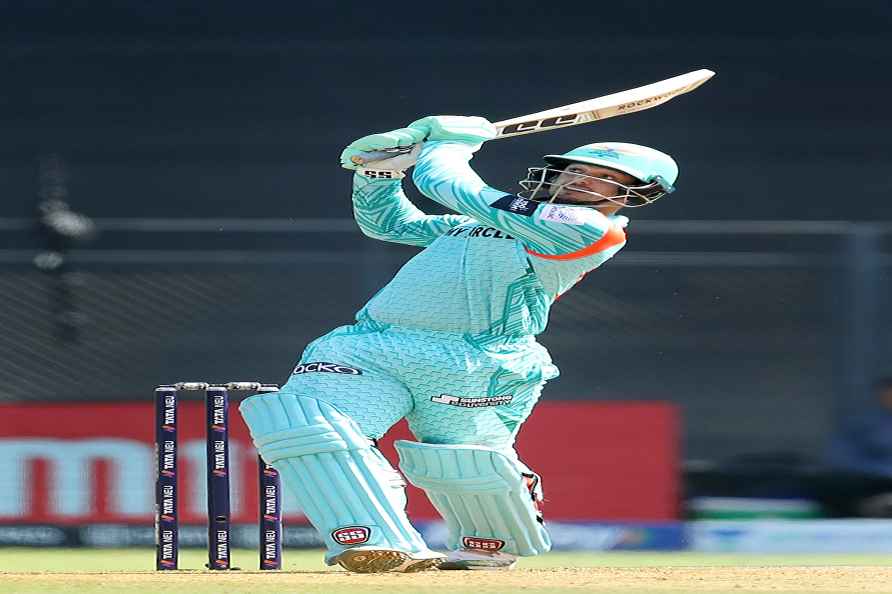 [Mumbai: Quinton de Kock of Lucknow Super Giants plays a shot during the Indian Premier League 2022 cricket match between Delhi Capitals and Lucknow Super Giants, at the Wankhede Stadium in Mumbai, Sunday, May 1, 2022. (Sportzpics for IPL/ /PTI] Mumbai, May 1 : Lucknow Super Giants captain KL Rahul won the toss and opted to bat first against Delhi Capitals in the 45th match of the IPL 2022 at the Wankhede Stadium, here on Sunday. Lucknow, who have won six matches so far, made one change in their playing XI as Krishnappa Gowtham came in place of Avesh Khan. "We are going to bat first. Looks a good wicket, put some runs on the board and defend it. Try and go out there, put a par total on the board and back our bowlers," said Rahul at the toss. "Mistakes do happen, we just had an honest chat that we could have been smarter. It happens under pressure, spoke about that and guys are honest to accept their mistakes. Avesh Khan misses out and Gowtham comes in," said Rahul about the previous match against Punjab Kings, which they won by 20 runs. "Avesh is just coming from a small injury, didn't want to play him back-to-back,'' he added. On the other hand, the Rishabh Pant-led Delhi, who have won four matches so far, didn't make any change in their team for this crucial game. "We don't mind because we were in two minds. The wicket is looking on the slower side but this is a new wicket and no team has played on this wicket. We are always trying to improve the way we play. Sometimes you win, sometimes you lose, but you got to take positives and move forward. We are playing with the same team. He (Nortje) is coming off nicely," said Pant. Playing XIs: Delhi Capitals: Prithvi Shaw, David Warner, Mitchell Marsh, Rishabh Pant(w/c), Lalit Yadav, Rovman Powell, Axar Patel, Shardul Thakur, Kuldeep Yadav, Mustafizur Rahman, Chetan Sakariya. Lucknow Super Giants: Quinton de Kock(w), KL Rahul(c), Deepak Hooda, Marcus Stoinis, Ayush Badoni, Krunal Pandya, Krishnappa Gowtham, Jason Holder, Dushmantha Chameera, Mohsin Khan, Ravi Bishnoi. /IANS

Not a PM, just a 'pradhan sevak': Modi
[**EDS: HANDOUT PHOTO MADE AVAILABLE FROM PIB ON TUESDAY, MAY 31, 2022** Shimla: Prime Minister Narendra Modi releases the 11th instalment of financia

Mumbai, May 31 : Filmmaker Aditya Chopra has invested two years on VFX to make the Akshay Kumar-starrer 'Samrat Prithviraj' into a visual extravaganza. Akshay says, "Retelling the legend of Samr […]

Opium farming in 620 acres of land in Bihar destroyed

Patna, May 31 : Security forces have destroyed opium crops in 620 acres of land in three districts of Bihar in the past one year, an official of state police said on Tuesday. Farming of opium in […]

New Delhi, May 31 : A plea has been moved in the Supreme Court challenging a Gauhati High Court order, which upheld the Assam Repealing Act of 2020 that turned existing provincialised madrassas in the […]