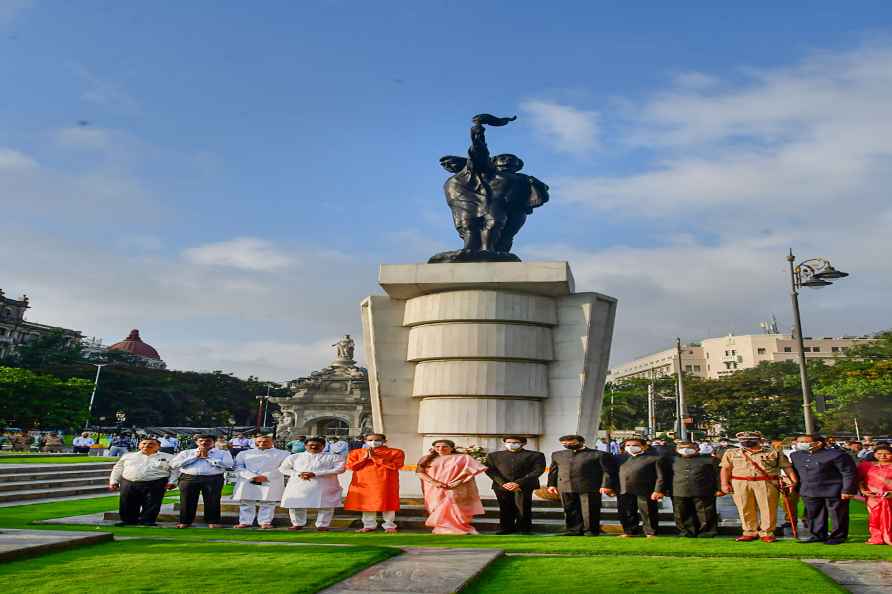 [Mumbai: Maharashtra CM Uddhav Thackeray with his wife Rashmi Thackeray, Maharashtra Minister Aaditya Thackeray and others pay tribute to those who sacrificed their lives for the 'Samyukta Maharashtra Movement', on the occasion of 62nd Maharashtra Day, at Hutatma Chowk in Mumbai, Sunday, May 1, 2022. ( /PTI] Mumbai, May 1 : Despite battling with three Covid-19 waves for over two years, Maharashtra did not allow any impediments to its progress and now poised to become a One Trillion Dollar economy in the country, Governor Bhagat Singh Koshyari said here on Sunday. He said that the state will be the first in the country to achieve this economic landmark, in his address to mark the 62nd Maharashtra Day celebrations in the presence of Chief Minister Uddhav Thackeray, Ministers and other top dignitaries. The Maha Vikas Aghadi (MVA) government also tackled the pandemic in a well-planned manner and set an example before the entire nation, more than 92 per cent adult population has been administered at least one dose of Corona vaccine and work is on to cover the rest soon, said the Governor. Koshyari expressed happiness that the state is second both in the 'Export Preparedness Index' of the Niti Aayog and also in the Centre's 'Good Governance Index Report-2021'. Giving an overview, the Governor said the state has already started its comprehensive Electric Vehicles Policy and now registrations have shot up by 157 per cent over the previous year with tax rebates to housing societies which install EV charging stations. Under the Maha Aawas Scheme, 475,000 homes have been provided in rural areas, 174 water supply schemes launched under Jal Jeevan Mission, property tax rebates, etc. The state is creating a Rs 100-crore start-ups fund, Rs 1,100 crore are invested in projects for youths under the Mukhyamantri Rojgar Nirmiti Program. The poor were provided free Shiv Bhojan Thalis during the Corona pandemic, and currently 1,549 centres are running with a total of 9.18 crore plates benefitting the needy. The state gives an incentive of Rs 50,000 to those farmers who repay loans regularly benefitting around 20 lakh peasants, a closed pipeline irrigation system is being readied, besides and other initiatives for the farming community. A network of 16,000 kms roads is coming up in the state under MNREGA and MGSS and PSY schemes for good connectivity to rural areas. To boost exports, an independent Agricultural Export Policy has been formulated and cluster-wise facilitation cells development for 21 crops. The MVA plans to set up a Bulk Drugs Park in Raigad on 2,500 acres and a Medical Equipment Park at the Auric Smart City near Aurangabad on 350 acres, said the Governor. The government slashed VAT on CNG from 13.5 to 3 per cent to boost the use of eco-friendly fuel, is promoting waterways in a big way with water taxis launched, and jetties coming up in Palghar, Thane, Raigad and Ratnagiri. The state has started flights from smaller airports in Sindhudurg, Nanded, Gondia, Jalgaon, Kolhapur and Nashik to boost intra-state air travel, is strengthening the public transport in Mumbai by launching two new Metro Lines -- 2A and 7 -- and work is on for 14 other lines. The ambitious redevelopment project of the BDD Chawls has started, the Mumbai-Nagpur Super Expressway is nearing completion and will be opened partly soon, the Mumbai Coastal Road Project is progressing, besides works on Mumbai-Pune Expressway, the Versova-Bandra Sea Link, Thane Creek Bridge, the Greenfield Konkan Express Highway, Versova-Virar Sea route project, Virar-Alibaug Multipurpose Transport Corridor and other projects are underway. To boost solar power generation, the state will set up 187MW and 390MW plants in different parts, and 99,852 solar agriculture pumps of the targeted 100,000 have been installed, and 43 Amrit Cities have joined in the Race to Zero' to make them 'carbon neutral'. Koshyari recalled the sacrifices of the martyrs who fought for Maharashtra and the contributions of heroes like Chhatrapati Shivaji Maharaj, Mahatma Jyotirao Phule and Savitribai Phule, Rajarshi Chhatrapati Shahu Maharaj, Lokmanay Bal Gangadhar Tilak, G. G. Agarkar, Bharat Ratna Dr. B.R. Ambedkar and others. /IANS