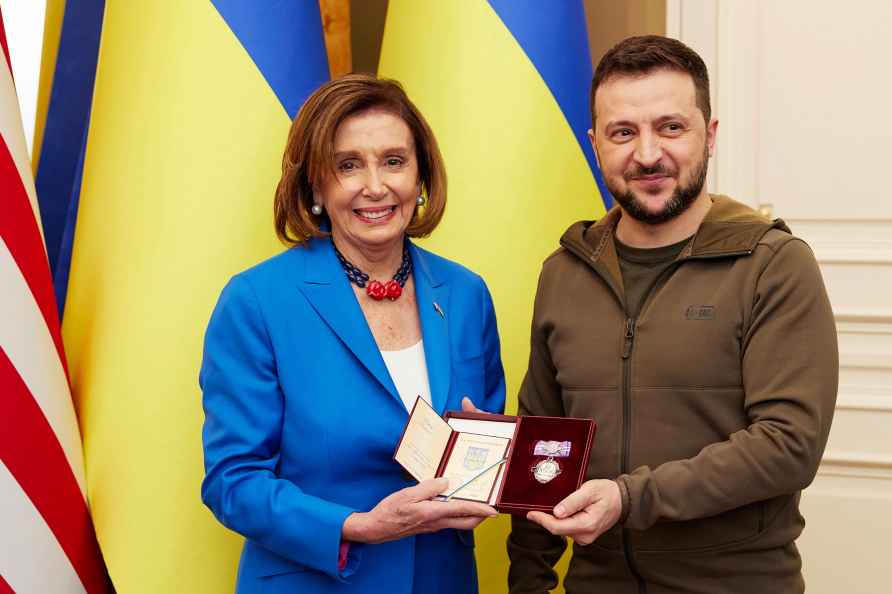 [Kyiv: In this image released by the Ukrainian Presidential Press Office on Sunday, May 1, 2022, Ukrainian President Volodymyr Zelenskyy, right, awards the Order of Princess Olga, the third grade, to U.S. Speaker of the House Nancy Pelosi in Kyiv, Ukraine, Saturday, April 30, 2022. Pelosi, second in line to the presidency after the vice president, is the highest-ranking American leader to visit Ukraine since the start of the war, and her visit marks a major show of continuing support for the country's struggle against Russia. /PTI] By Jaison Wilson New Delhi, May 1 : Hannah's honey brown eyes were not teary but filled with despair and trauma of war when she was seen standing quietly outside a camp meant for Ukrainian refugees in Moldova. It was a chilly morning at the Central Moldovan camp where Hannah along with her two children -- an 8-month-old and another 2-year-old -- were staying. It is estimated that out of the 11 million displaced citizens of Ukraine due to the war, nearly 5.5 million people are camping in the neighbouring countries in the Republic of Moldova, Romania, and Hungary among others. Out of self-respect, Ukrainians will not ask anything from anyone until they recognise someone as their own, says Sujo John the founder of 'YouCanFreeUs', a global human rights organisation. He was talking to IANS after the completion of his visit to Ukraine and the neighbouring Eastern European countries as part of his humanitarian work, including the supply of various essentials to the war-affected people. Though poor compared to other European countries, they had fine homes and good lifestyles, all of this changed all of a sudden when Russia launched the invasion. And now, they have to stay with at least 30-40 people in small rooms for safety, he said. The story of Hannah, a Ukrainian woman, divulged after her initial hesitancy to accept the relief package. Sujo told her to consider him as a brother following which the horrors of the war were narrated. She told Sujo that her only brother, a pilot, killed during an attack and her husband and father were still fighting against the Russian invasion. He also recollected another painful story of a boy whose father was killed in the war. The child, unaware of the complications of war, asked Sujo to take him to his father. "Hannah and this boy represent a large number of women and children who are badly affected by the war and are leaving the country. There is a restriction on males to leave the country and most of them are taking part in the war as they are strong patriots," Sujo says. The other major crisis is the financial constraints in the country. As Ukraine cannot afford to give salaries to all the employees, the payments are now limited to the soldiers and doctors, he said. Explaining his experience in Ukraine and the neighbouring countries, he said the people are suffering because of the continuous bombing and shelling. Even if you have the money you cannot buy anything due to the situation, he said. Gas masks are very essential in war-affected places due to the continuous spread of airborne pollutants and toxic gases, Sujo said, pointing out that the war is all about airstrikes and the infantry operations are comparatively less. During the visit to Western Ukraine which is relatively calm, I have seen refugee influx from across the country. Churches, Non-Profit Organisations, and individuals are helping and opening up their places for the refugees, he said, stressing the need to help the war-affected people in the distressing times. His organisation 'YouCanFreeUs', fis ighting modern slavery around the world through advocacy, rescue, and rehabilitation. Now he along with his colleagues are sending supplies ranging from canned food items, household items, power generators to gas masks, and gas filters among hundreds of essentials to Odesa in Southern Ukraine, Eastern and Western Ukraine from Siret, Romania, and Moldova. (Jaison Wilson can be reached at jaison.w@ians.in) /IANS