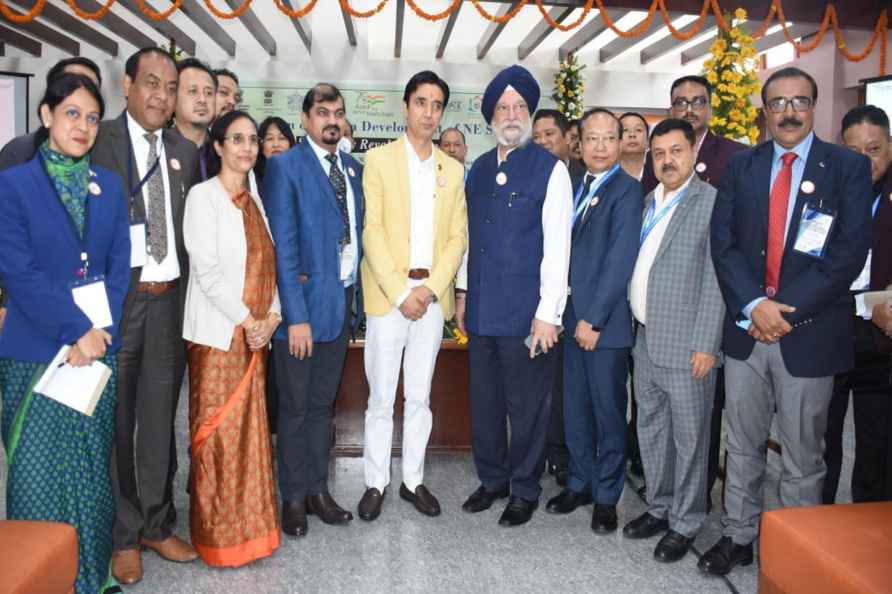 [Gangtok: Union Minister for Housing & Urban Affairs Hardeep Singh Puri during the symposium on 'Urban Development in North Eastern States: Smart City Revolution', organized by Ministry of DoNER and Government of Sikkim in collaboration with North Eastern Council, in Gangtok, Saturday, April 30, 2022. The programme was held as a part of the North East Fest-2022 under Azadi Ka Amrit Mahotsav. ( /PTI] Kolkata, April 30 : Union Home Minister Amit Shah will visit West Bengal for three days and is expected to boost the BJP functionaries in the state in the backdrop of the 2024 Lok Sabha polls. Shah will arrive in Kolkata on the night of May 4. On May 5, he will first go to Hingalganj in the North 24 Parganas district and attend a function of the Border Security Force (BSF). From there he will head to Siliguri in North Bengal's Darjeeling district and address a public rally at Railway Institute Ground. There is also a possibility of the Home Minister having a meeting with the representatives of different political and non-political organisations based out of Darjeeling on May 5. On May 6, he will go to the adjacent Cooch Behar district of North Bengal and attend a government programme in Tinbigha. He will return to Kolkata on May 6 afternoon and is expected to hold meetings with the top BJP leaders from the state and then fly back to Delhi the same day. This will be Shah's first visit to the state after the party's defeat in the 2021 West Bengal Assembly polls. Since then, the party's performance in by-elections and municipal polls has been pathetic. The party even lost the by-poll for the Asansol Lok Sabha seat, which it had won in 2019 by a margin of around two lakh votes. In many cases, Left Front candidates secured the second position in vote share percentage leaving the BJP in the third position. "It is crucial to retain all the 18 Lok Sabha seats that we won in 2019 in the coming 2024 Lok Sabha elections as well. But the current situation is very grim and we hope that the Home Minister gives us a definite message and throws some light on how to improve our organisational structure and functioning in the state," a member of the BJP's state committee in West Bengal, who did not wish to be named, told IANS. BJP's national vice-president and party MP, Dilip Ghosh, said that although the main purpose of Shah's visit is to attend official programmes, he will also hold meetings with the party leaders from the state. /IANS

Schools, colleges in Coimbatore to have anti-drug clubs

Chennai, Aug 13 : The Coimbatore district administration has directed all schools and colleges to launch anti-drug clubs, following the rising menace of narcotics use among students. In a statem […]

Manhunt launched for TN industrialist who raped techie in Bengaluru

Bengaluru, Aug 13 : Karnataka police have launched a manhunt for a Tamil Nadu industrialist who allegedly raped a software engineer at a luxury hotel room here on the pretext of a business meeting, po […]