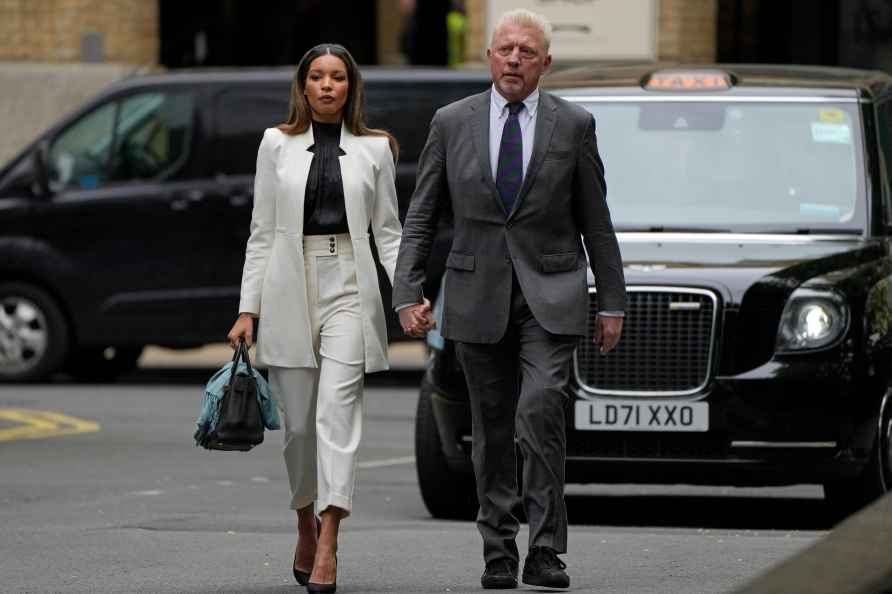 [London : Former Tennis player Boris Becker with Lilian de Carvalho Monteiro as they arrive at Southwark Crown Court for sentencing in London, Friday, April 29, 2022. Becker was found guilty earlier of dodging his obligation to disclose financial information to settle his debts. /PTI] London, April 29 : German tennis legend Boris Becker has been sentenced to two and a half years jail term for hiding 2.5 million pounds sterling worth of assets and loans to avoid paying debts. Becker, 54, was on Friday handed the two and a half years jail term after being found guilty by a British court of charges relating to his 2017 bankruptcy. However, the former Wimbledon champion had denied breaking UK insolvency laws after he was declared bankrupt in 2017, owing creditors almost £50m. But he was found guilty of four charges by a jury under the Insolvency Act. He was cleared on 20 counts. The court was told that the six-time Grand Slam champion sent almost £390,000 in payments from his business account to others. The case centered on Becker's bankruptcy in June 2017 resulting from an unpaid loan of more than £3m on his luxury estate in Mallorca, Spain, the BBC reported on Friday. Becker was earlier this month found guilty by a jury after two weeks or so of hearing evidence. He was found guilty of removal of the property, two counts of failing to disclose estate and concealing debt. Boom, Boom Becker as he was known during his heyday, the German burst onto the tennis circuit by sensationally winning the Wimbledon title in 1985 when he was 17 years and 228 days old. He got into financial troubles a few years after retiring from tennis as some of the investments he made did not work out. A big payout in a divorce settlement with his first wife Barbara Feltus. Becker has faced similar allegations of tax evasion in Germany also. In October 2002, the Munich District Court sentenced him to two years in prison for tax evasion -- the execution of the sentence was suspended. In addition, he was sentenced to pay a fine of 300,000 euros and another 200,000 euros to various charitable institutions. /IANS

Monsoon hits Kerala, conditions favourable for further advance
[Thiruvananthapuram: A man rows a traditonal boat at a coastal village, in Thiruvananthapuram, Sunday, May 29, 2022. The Southwest Monsoon has set in

[Budgam: Lieutenant Governor Manoj Sinha meets the family members of late Amreen Bhat, at their residence in Budgam, Sunday, May 29, 2022. Bhat was killed by terrorists on May 25 in Budgam. Her nephe […]

[**EDS: TWITTER IMAGE POSTED BY @Media_SAI ON SUNDAY, MAY 29, 2022** Poznan: Prachi Yadav becomes the 1st Indian Canoeist to win a World Cup Medal as she clinches the Bronze Medal in the VL2 Women's 2 […]