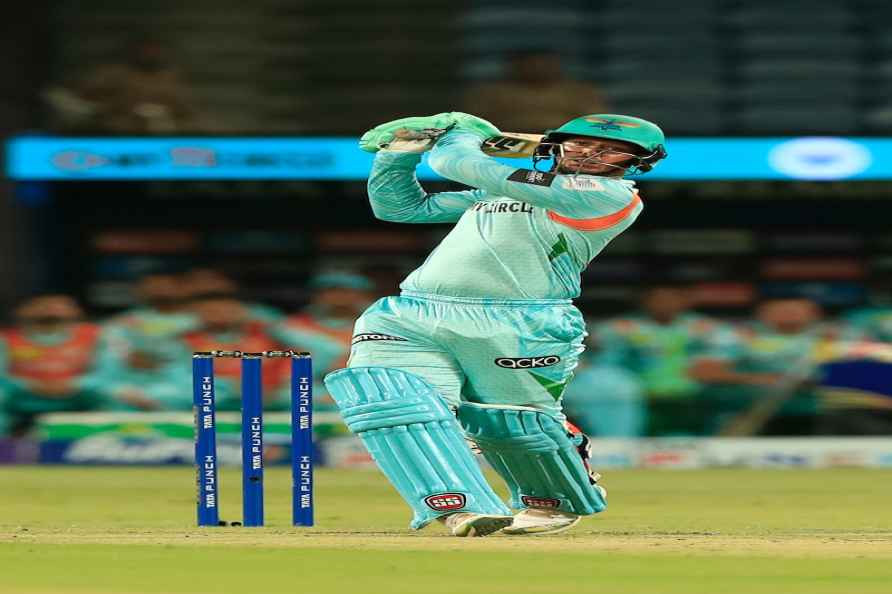 [Pune: Quinton De Kock of Lucknow Super Giants plays a shot during the Indian Premier League 2022 cricket match between Punjab Kings and the Lucknow Super Giants, at the MCA International Stadium, in Pune, Friday, April 29, 2022. ( /PTI] Pune, April 29 : Punjab Kings skipper Mayank Agarwal has won the toss and elected to bowl first against Lucknow Super Giants in match 42 of IPL 2022 at the MCA Stadium here on Friday. This is also the first time Lucknow skipper K.L Rahul will be facing his former franchise in the ongoing tournament after the right-handed opener left Punjab in the run-up to the mega auction. After winning the toss for just the second time in the tournament, Agarwal stated that his eleven is unchanged from their 11-run win over Chennai Super Kings. "We'd like to know what total to chase. There is very less dew here. The guys are quite flexible. It's going to be a terrific challenge." Rahul revealed that pacer Avesh Khan has recovered from a niggle that kept him out of the 36-run win against Mumbai Indians and replaces right-handed batter Manish Pandey in the playing eleven. "It's a high boundary-scoring ground, good to have an extra bowling option (in Avesh). It'll be a good opportunity for Jason (Holder) to bat at seven." Rahul further said that Lucknow will have to do smart work with the chase, especially with no Pandey, a specialist batter, in the playing eleven. "When dew is not around, it's quite an even game. I have played here before, we'll have to bat smartly. Another opportunity for us to get two points." Playing XIs: Punjab Kings: Shikhar Dhawan, Mayank Agarwal (c), Bhanuka Rajapaksa, Liam Livingstone, Jonny Bairstow, Jitesh Sharma (wk), Rishi Dhawan, Kagiso Rabada, Rahul Chahar, Arshdeep Singh and Sandeep Sharma Lucknow Super Giants: Quinton de Kock (wk), KL Rahul (c), Krunal Pandya, Deepak Hooda, Ayush Badoni, Marcus Stoinis, Jason Holder, Avesh Khan, Mohsin Khan, Dushmantha Chameera and Ravi Bishnoi /IANS

Monsoon hits Kerala, conditions favourable for further advance
[Thiruvananthapuram: A man rows a traditonal boat at a coastal village, in Thiruvananthapuram, Sunday, May 29, 2022. The Southwest Monsoon has set in

Aden (Yemen), May 30 : UN Special Envoy for Yemen, Hans Grundberg arrived in the southern port city of Aden to hold meetings with the country's Presidential Leadership Council (PLC) over the reopening […]

Khartoum, May 30 : Sudan's Transitional Sovereign Council Chairman, Abdel Fattah Al-Burhan has issued a decree lifting the state of emergency in all parts of the country. The order was made to " […]

Beijing reports no community transmission of Covid-19 since May 27

Beijing, May 30 : Beijing saw no community transmission of Covid-19 in the city from Friday to 3 p.m. Sunday, an official told a press conference. The Chinese capital reported seven new locally […]

Moscow, May 30 : Russian President Vladimir Putin has said his country will continue to supply natural gas to Serbia uninterruptedly, during a phone call with Serbian President Aleksandar Vucic. […]