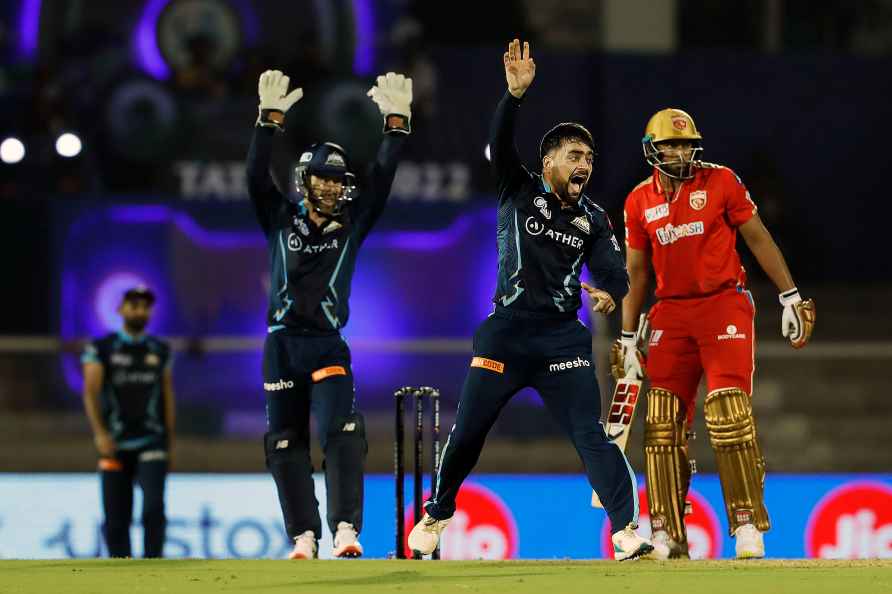 By Avinash Kr Atish Mumbai, April 28 : Time and again, players in various sports across the world have shown what they can achieve with their self-belief, fighting spirit and it was no different when the dynamic duo of Rahul Tewatia and Rashid Khan believed in their abilities and held nerves to pull off a last-ball heist for Gujarat Titans in an IPL 2022 match. Both Tewatia and Rashid may not be the pure batters but they certainly have the skill to win matches for their team with the bat. Prior to the match against SRH on Wednesday, both players had already won the games for Gujarat with the bat in the ongoing IPL 2022 season. After finishing the game, both players reflected on their belief and fighting spirit in their social media posts and in the post-match presentation. "Just keep believing," wrote Tewatia on Twitter along with his pictures. "This is what #TataIPL is all about, you fight till the end! @rahultewatia02 I am glad we could get those runs together!," tweeted Rashid. "Feels good to go there and have that self-belief and keep my shape stronger and hit it. Happy to deliver against them (SRH), just trying to play my game and have that belief in my batting which I've been working on from the last two years," the Afghan spinner said in the post-match presentation. "When it was 22 left. I just told Tewatia that we have given 25 in the last over with one of our best bowler bowling and I told him that we needed to have that belief and not panic, anything is possible. Just stay there, keep your shape and hit it strong and that was the plan (with Tewatia)," he added. Chasing a big target of 196 runs for victory, wicket-keeper batter Wriddhiman Saha smashed a solid half-century(68 off 38) and kept Gujarat alive in the chase. However, apart from him, most of the Gujarat batters -- Shubman Gill (22), David Miller (17), Hardik Pandya (10) -- couldn't score big despite getting the starts. But, lower down the order, it was Rahul Tewatia (40 not out off 21) and Rashid Khan (31 not out off 11), who kept Gujarat in the game till the last over. At 140/5 after 16 overs, Gujarat were in a spot of bother but Tewatia and Rasid had some other plans. The duo went on to crack a slew of shots to break open the game. With 35 needed off 12 balls, the left-handed Tewatia used the left-arm angle to his advantage by smacking T Natarajan for a boundary and six - slog-sweep over cow corner. Gujarat needed 22 runs in the last over of the innings and Tewatia began on the right note by clubbing Marco Jansen over deep midwicket for another six but could eke out only a single off the next ball. The third ball was a length ball in the arc and it was slaughtered down the ground by Rashid for a six. However, Jansen bounced back and bowled a dot ball. With 9 runs required off 2 balls, Rashid got under the low wide full toss and sliced it away to clear the ropes. The match was set for a nail-biting finish with three runs needed off the final ball for Gujarat win and two for a Super Over. Jansen bowled a harmless short ball and it was pulled away by Rashid over the head of fine leg to pull off a final-ball heist for Titans. It was Gujarat's seventh victory out of their eighth match in the ongoing IPL 2022 and they are at the top of the tree with 14 points. /IANS

Aiming to return in September; T20 World Cup dream is on: Jofra Archer
London, June 30 : England pacer Jofra Archer said he is aiming a return to bowling by September this year and is optimistic about playing in the Men's

If I deliver with a good performance, then it creates an impact in the match: Shardul Thakur
Birmingham, June 30 : Ahead of India's much-anticipated rescheduled fifth Test against England starting in Edgbaston from Friday, pace all-rounder Sha

Tuticorin, June 30 : Dylan Fernandes and Katya Saini emerged champions in men's and women's category respectively in the 3rd All India Kiteboarding Championships here on Thursday. As the final d […]

Govt hikes import duty on gold to 15 per cent: Notification.

Govt hikes import duty on gold to 15 per cent: Notification. […]