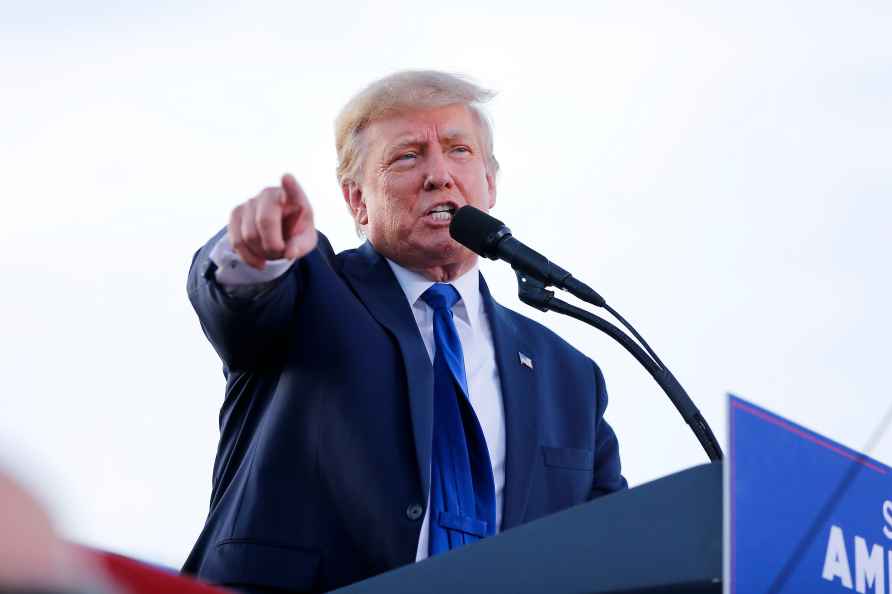 [Delaware: Former President Donald Trump speaks at a rally at the Delaware County Fairgrounds, Saturday, April 23, 2022, in Delaware, Ohio, to endorse Republican candidates ahead of the Ohio primary on May 3. A New York judge has found former president Donald Trump in contempt of court for failing to adequately respond to a subpoena issued by the state's attorney general as part of a civil investigation into his business dealings. /PTI] New Delhi/Thiruvananthapuram, April 25 : The Congress disciplinary committee, led by veteran Congress leader A.K. Antony will meet in Delhi on Tuesday to look into the explanation given by estranged leader and former Union Minister K.V. Thomas after he was served a show cause notice for breaching party discipline. Incidentally, Antony and Thomas were colleagues in the cabinet of Prime Minister Manmohan Singh (2009-14) and the latter was the state Tourism and Fisheries Minister in Antony's cabinet (2001-04). Congress leaders from Kerala have been seeking Thomas's immediate removal from the party following his participation in a seminar on the Centre-state relations held as part of the 23rd Party Congress of the CPI-M in Kannur early this month. The CPI-M had invited party MP Shashi Tharoor and Thomas to participate in the seminar. State Congress President K. Sudhakaran immediately told both leaders not to participate and even the party President Sonia Gandhi intervened in the matter and repeated the same. While Tharoor backed out, Thomas decided to go ahead to attend the seminar. The Antony committee met in Delhi on April 11 and decided to serve Thomas a show cause notice, seeking his reply in a week's time. Thomas promptly complied. Thomas has been maintaining all through that all what he did was to take part in a seminar to highlight the wrong doings by the present BJP led NDA government and this cannot be seen as an act of indiscipline, as several Congress leaders have done it in the past. The Antony committee will also look into former Punjab chief Sunil Jakhar's act of indiscipline when he defied the party's gag order and spoke about former Punjab Chief Minister Charanjit Singh Channi. /IANS

With the opposition divided, DMK faces no challenge in TN
[Jabalpur: Madhya Pradesh Chief Minister Shivraj Singh Chouhan with BJP leaders during a public meeting ahead of the state local bodies elections, in

Unable to unite Oppn behind him, KCR charts his own course
[San Fransisco: Chief Justice of India N. V. Ramana with his Sivamala presents a copy of the autobiography of the Father of the Nation Mahatma Gandhi

Gandhinagar, July 1 : Union Home Minister Amit Shah, reminding of the Congress rule in Gujarat, said on Friday that "during those days, Rath Yatra processions were stopped, violence would brake out, c […]

Preparations for PM visit in Varanasi

Udaipur: Vacant boats in Fateh Sagar lake during a curfew imposed by administration to maintain law and order after the murder of tailor Kanhaiya Lal, in Udaipur, Sunday, July 3, 2022. ( /PTI […]

Pallekele, July 1 : The all-round performance of Deepti Sharma and a valuable contribution with the bat by captain Harmanpreet Kaur (44 off 63 balls) helped India beat Sri Lanka by four wickets in the […]