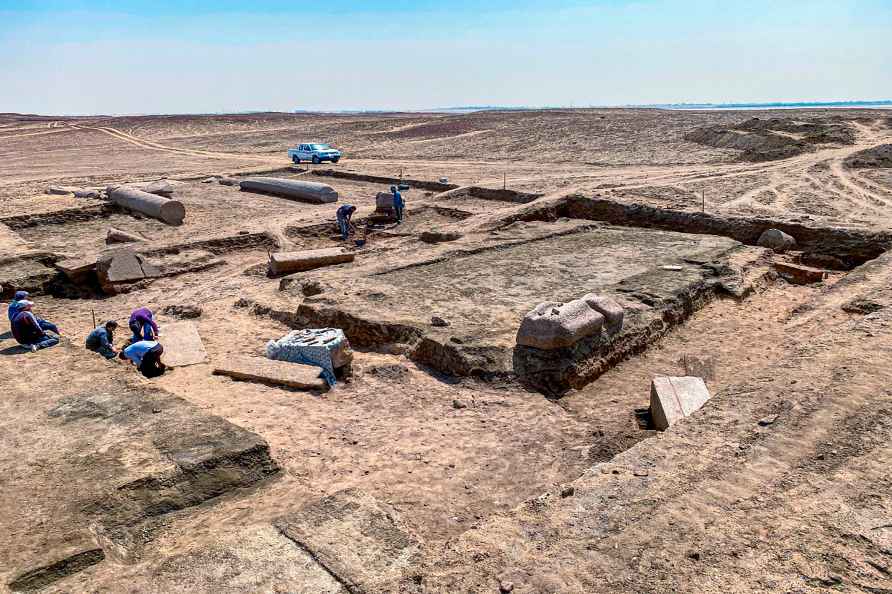 [Tell el-Farma :This undated photo provided by the Egyptian Tourism and Antiquities Ministry on Monday, April 25, 2022, shows archeologists working in the ruins of a temple for Zeus-Kasios, the ancient Greek god, at the Tell el-Farma archaeological site in the northwestern corner of the Sinai Peninsula. Tell el-Farma, also known by its ancient name Pelusium, dates back to the late Pharaonic period and was also used during Greco-Roman and Byzantine times. /PTI] New Delhi, April 25 : 'Codes of a Future, Traces of the Ancient', a solo exhibition by contemporary artist Anni Kumari was recently inaugurated at the Treasure Art Gallery (TAG) here. Curated by Sanjana Shah and Inspired by how mathematical concepts intersect in nature, life, and the cosmos, the works will be on display till May 20. The 10 works on display include three large-sized paintings in 7X5 feet scale that make up a series called intersections. These are based on her understanding of planetary positions, the interactions between the planets, and particularly the Sun, Moon, and the stars. Through a process of working within vertical and horizontal grids using scales, protractors, and beam compasses, Anni traced the intersection points of these grids, creating a range of diagonals and spiral patterns. The process began with a set of drawings where she plotted natural numbers on square and spiral grids and then creating a pattern by selecting only the points corresponding to prime numbers. As these unique patterns started emerging, the artist began exploring the relationships between specific patterns in geography and cosmology, particularly 'physical cosmology', by studying observations about the universe's origin, its large-scale structures and the dynamics between cosmic bodies. The two most prominent and prevalent shapes in her work are squares and circles, referencing cosmic phenomena like eclipses, and the Luni-solar calendar, also known as the Panchang. Her works use only a single pigment - black - which is conventionally not part of the colour wheel, and also helps bring about high contrast. The white parts of her canvas, intentionally left blank, add to the duality of her compositions, which are both minimal and dynamic, and draw in the viewer by demonstrating both centripetal as well centrifugal properties. Anni credits Indian traditional art and temple architecture as one of her most prominent inspirations, which emulate the primordial shapes of circles and squares, with calculated precision being used in even the simplest of designs like the Rangoli design pattern of Kolam in Tamil Nadu or the monochrome geometry in the Khovar folk art of Jharkhand. As such, she has observed that these patterns are inherently rooted in ideas of growth and consciousness, with these spaces and practices being energy centres for many people. The artist shared: "I draw inspiration from my experience of regularly visiting ancient monuments and temples, which were often built using mathematical ratios and fractals, where singular patterns were repeated again and again to create large forms. My works are also inspired by the ancient floor drawing tradition from Tamil Nadu called 'Kolam', as well as geometrical motifs from the traditional folk art of Jharkhand's Hazaribagh area, known as Khovar. "Each of these aspects has defined the palette, the concentric circles and lines, and the 'animated' quality of my works. However, beyond the conceptual frameworks that these helped create, my paintings also carry nuances of my personal interpretations based on my experiences, as well as narratives from mythology, ritualistic practices, the experience of living in different geographies of Jamshedpur, Delhi, and Rishikesh, and the socio-personal background I grew up with." Patterns and repetition are fundamental aspects of the world around us, carrying imprints of the past and signs of the future. Embodying exactly this unique balance by being both a native of methodological scientific temperament and a practitioner of fluid creativity, the artist expresses her deepest inner self and thoughts through her work. While she has worked and continues to work with a range of mediums including graphite, charcoal, ink, and watercolour pencils on paper, the event focuses primarily on acrylic and oil on canvas as a medium. She is currently working on several large-scale drawings based on ancient astronomical instruments known as yantras, as found in the Jantar Mantar observatories in Delhi and Jaipur. /IANS

Ranji Trophy Final: Kartikeya takes four as Mumbai bowled out for 269, set MP 108-run target
[Bengaluru: Mumbai's Suved Parkar raise his bat to celebrate his half-century during the fifth and final day of the Ranji Trophy final cricket match b

Climate change is just not a matter of government policies. Sustainable climate practices have become a part of lives of people in India.

Climate change is just not a matter of government policies. Sustainable climate practices have become a part of lives of people in India. […]