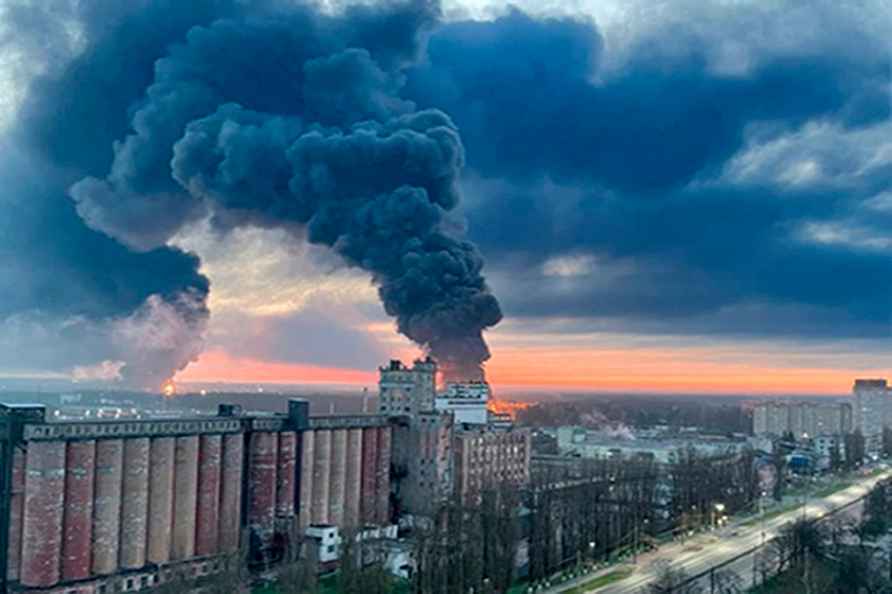 [Bryansk: In this photo taken by an anonymous source, smoke rises from oil storage facilities hit by fire in Bryansk, Russia, Monday, April 25, 2022. The Emergencies Ministry said the massive fire at the depot in the city of Bryansk erupted overnight. The oil depot is owned by Transneft-Druzhba, a subsidiary of the Russian state-controlled company Transneft that operates the western-bound Druzhba (Friendship) pipeline carrying crude to Europe, and it wasn't immediately clear if the blaze could affect the deliveries. /PTI] Moscow, April 25 : A fire broke out on Monday at an oil depot in Bryansk, a large Russian city near the Ukraine border. The blaze occurred at a premises operated by Transneft-Druzhba JSC and at another location, officials told RIA Novosti. No casualties have been reported and there is no threat to residential buildings, RT reported citing the Ministry of Emergency Situations as saying. "The evacuation of the population is not planned. According to preliminary information, there were no victims," its press service stated. Local residents have reported that explosions were heard and sirens are audible in social media videos, according to TASS News Agency. Another fire was recorded in the Fokinsky district of the city, the causes of which have not yet been established, Moscow daily Kommersant has reported. Bryansk is home to over 400,000 people, and is an important regional hub, RT reported. An Interfax source revealed that a 10,000-tonne tank of diesel fuel was ignited. State-owned Rossiya-24 TV has suggested that the second object that caught fire was a diesel fuel depot in a military unit. Before Monday's incident, officials in Bryansk region had warned of a potential terrorist threat. Similar fears were announced in parts of Voronezh and the entirety of the smaller Belgorod region, where Ukraine was accused of shelling an oil depot earlier this month. /IANS

Kanye West makes surprise appearance at BET Awards
[In this image taken from video, spectators are sent plunging to the ground as part of a wooden stand collapses during a bullfight, Sunday, June 26, 2

Caught a spy from Imran Khan's residence in Islamabad: PTI

By Hamza Ameer Islamabad, June 28 : The Pakistan Tehreek-e-Insaf (PTI) has claimed to have caught an employee at Former Prime Minister Imran Khan's residence in Bani Gala here, who was acting as […]

, it has been claimed, a UK-based media outlet reported. Sources close to the couple said Hall, 65, was 'shocked' by the sudden end to their six years together last week, Daily Mail reported. […]