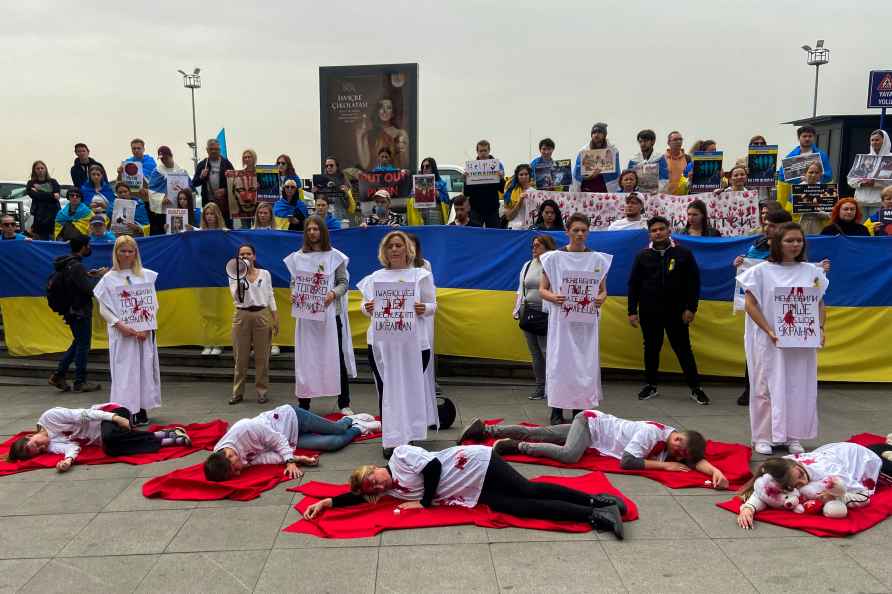 [Istanbul: People shout slogans during a protest by pro-Ukraine people against Russia's invasion of Ukraine, in Istanbul, Turkey, Friday, April 22, 2022. Dozens of demonstrators in Istanbul joined a protest on Friday against Russia's ongoing military attacks on Ukraine and alleged atrocities made by the Russian armed forces at Bucha and Mariupol. /PTI] Lviv, April 22 : One in three households with at least one patient with a chronic condition is unable to secure medication and care in Ukraine, due to the ongoing invasion by Russia, according to a new survey released by World Health Organization (WHO) on Friday. The war, which began on February 24 and is continuing since, has devastated the health and well-being of millions of civilians, and severely impaired the Ukrainian health system. The nationwide health needs assessment, conducted in partnership with Premise, surveyed about 1,000 households. The preliminary result shows that two out of five households (39 per cent) have at least one member with a chronic illness, such as cardiovascular disease, diabetes or cancer. Less than a third (30 per cent) of respondents sought out health-care services recently; of those, 39 per cent cited the security situation as the main reason, while 27 per cent reported that no health-care services were available at all in their area. Most households (70 per cent) surveyed are sheltering in their own homes at this time, while 11 per cent are staying with friends and family members in relatively safer areas, 8 per cent are on the move within Ukraine, and 3 per cent are in a shelter or camp for internally displaced people. "Two months into the war, our findings show the urgent need for continued health system support in Ukraine," said Dr Jarno Habicht, WHO Representative and Head of the WHO Country Office in Ukraine, in a statement. Although the WHO has been able to reach nearly 7.5 million people over the past eight weeks with life-saving supplies, equipment and medicines, the agency said it is still unable to reach some of the hardest-hit areas in the east where the health system has all but collapsed. "We have received reports, for instance, that nearly all health facilities and hospitals in Luhansk oblast are either damaged or destroyed, and the situation is critical in several others. It is vital that we gain access so we can assess health needs and move vital supplies into affected areas, including Mariupol. Civilians have a right to health, even in times of war," Habicht said. Ukraine's health system is facing multiple challenges. The risk of infectious diseases, and increasingly waterborne diseases, is significant, and routine immunisation, including Covid-19 vaccination, is greatly diminished because of the war. Access to reproductive, maternal and antenatal care, as well as mental health care, is severely impacted due to security concerns, restricted mobility, broken supply chains and mass displacement. And health care continues to come under attack, with more than 160 verified incidents since February 24. According to the United Nations, more than 12 million people have been forcibly displaced by the Russian invasion: 7.1 million people are displaced within Ukraine and more than 5 million refugees are outside Ukraine. Another 2.9 million are considering leaving their homes due to the war. /IANS

New Delhi, June 22 : A Delhi court on Wednesday granted permission to a prisoner, undergoing jail term for murder, to appear in the All India Law Entrance Test (AILET), conducted by National Law Unive […]

New Delhi, June 22 : A Delhi court on Wednesday granted bail to a B.Tech student who had allegedly developed a fake 'helicopter ticketing website' which was used to dupe people who wanted to travel fr […]