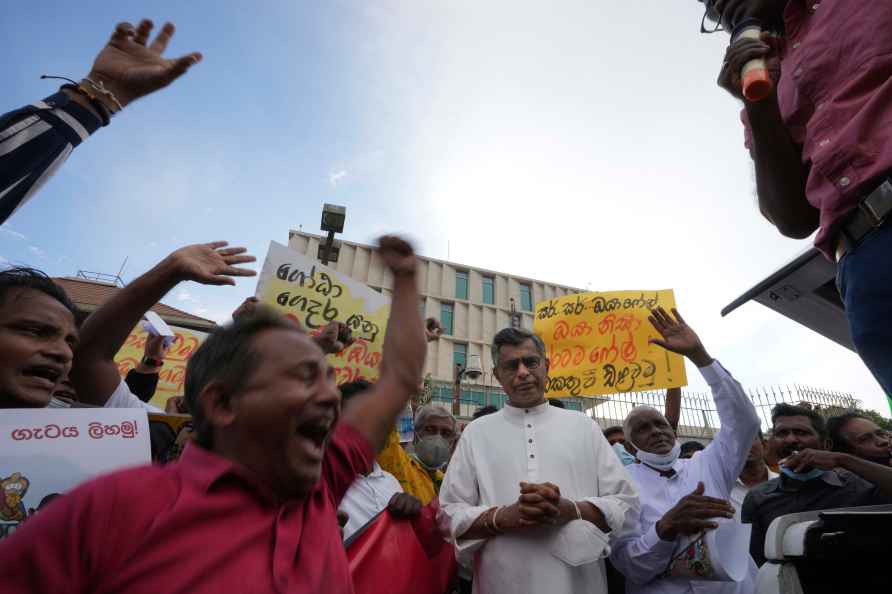 Colombo, April 11 : Sri Lanka is facing its worst economic crisis since gaining independence from the British in 1948 which has triggered food shortages, soaring prices and power cuts. Many say the government is to blame. and in recent days, thousands of Sri Lankans have taken to the streets to demand the resignation of President Gotabaya Rajapaksa, reports the BBC. Sri Lanka's problems come down to the fact that its foreign currency reserves have virtually run dry. It means the island nation cannot afford to pay for imports of staple foods and fuel, leading to acute shortages and very high prices. The government blames the pandemic, which all but killed off Sri Lanka's tourist trade, one of the island's biggest foreign currency earners, the BBC reported. It also says tourists were frightened off by a series of deadly bomb attacks on churches during the 2019 Easter Sunday attacks. However, many experts say economic mismanagement is to blame. There are many reasons for this, but one main factor is that at the end of its 30-year civil war in 2009, Sri Lanka chose to focus more on its domestic markets instead of exporting to foreign ones. So income from exports remained low, while the bill for imports kept growing. The government also racked up huge amounts of debt to fund what critics have called unnecessary infrastructure projects. At the end of 2019, Sri Lanka had $7.6 billion in foreign currency reserves, but by March 2020 it had only $2.3 billion. When he came to power in 2019, President Rajapaksa decided to cut taxes. This meant the government had less money to buy foreign currency on the international markets to increase its reserves. When Sri Lanka's currency shortages became a really big problem in early 2021, the government tried to stop the outflow of foreign currency by banning all imports of chemical fertiliser, telling farmers to use organic fertilisers instead. This led to widespread crop failures, said the BBC report. Sri Lanka had to supplement its food stocks from abroad, which made its foreign currency shortage even worse. /IANS

Mumbai, June 18 : Payal Rohatgi and her boyfriend Sangram Singh are to get married in Agra on July 9, the actress confirmed. The couple is to have a three-day long big fat wedding at Jaypee Pala […]

Aakanksha Singh goes gangsta: 'Rangbaaz' has been an interesting journey

Mumbai, June 18 : Aakanksha Singh who was last seen in the Amitabh Bachchan Ajay Devgn starrer 'Runway 34' is busy shooting for the new season of the upcoming web series 'Rangbaaz 3'. The story […]

Los Angeles, June 18 : The production team of 'The Late Show With Stephen Colbert' was subjected to detention by law enforcement agencies in the US Capitol after filming comedy segments for the said s […]

With 'Dhaakad' earning just Rs 2.58 cr, has Kangana ceased to be a bankable star?

By Akshay Acharya Mumbai, June 18 : Bollywood films may not be witnessing the best of times at the box-office but the real shocker comes from the Kangana Ranaut-starrer 'Dhaakad' which managed to e […]