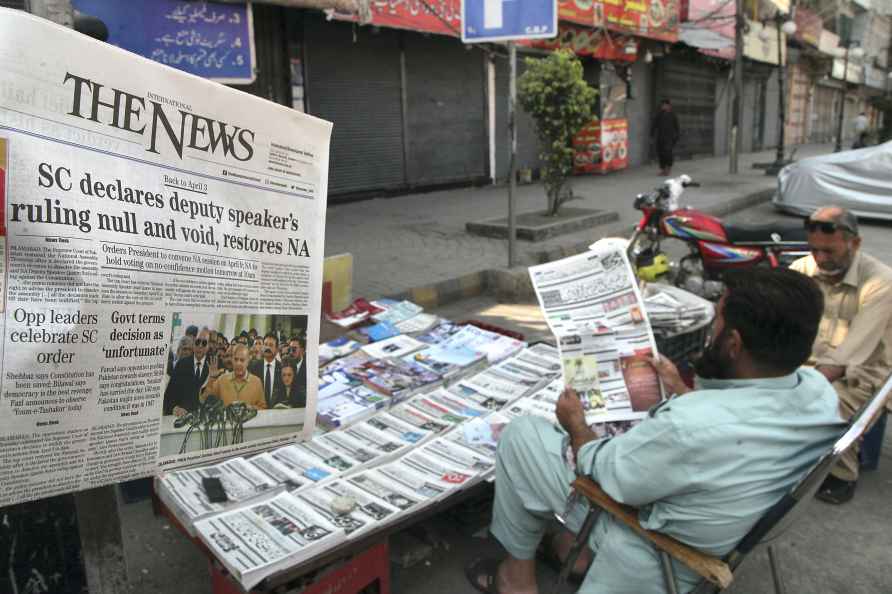 [Peshawar: People read copies of morning newspapers carrying headline news of the Supreme Court decision against Prime Minister Imran Khan's ruling, at a stall, in Peshawar, Pakistan, Friday, April 8, 2022. Pakistan's Supreme Court blocked Prime Minister Imran Khan's bid to stay in power, ruling that his move to dissolve Parliament and call early elections was illegal. That set the stage for a no-confidence vote by opposition lawmakers, who say they have enough support to oust him. /PTI] Islamabad, April 8 : The Pakistan Tehreek-e-Insaf (PTI) party is all set to launch an agitation against the dismissal of its government and the potential forming of a new regime in the wake of the Supreme Court's ruling setting the stage for the no-trust move against Prime Minister Imran Khan on Saturday, sources said. This movement may be launched in the next few days and protests will take place against the new government at every platform, The Express Tribune quoted the sources as saying. The PTI is also mulling resignations en masse of its lawmakers in the national and provincial assemblies. Though key leaders of the party opine that electoral reforms are crucial for fresh polls and so urgent resignations will be a politically dangerous decision as this would open the door for opposition to bring amendments or legislate as per its choice, the sources said. The ruling party, they added, is also considering approaching the courts to have a commission constituted to probe the "foreign conspiracy" against its government, but a step regarding this will be taken only after due legal consultation. PTI sources also told The Express Tribune that the ruling party had decided to reach out to the masses. The new government would be pressured, through public opinion, to undertake electoral reforms and hold fresh general elections. The party, the sources further said, will not leave the political turn unoccupied and the rallies organised against them will be led by Khan. Moreover, if the potential government forges cases against them or makes an arrest, then it will be responded with stern protests. /IANS

After Herald House sealing, Cong steps up attack on govt

New Delhi, Aug 4 : A day after the ED sealed Herald House, the Congress on Wednesday stepped up attack against the government and gave multiple adjournment motion notices in the Lok Sabha and suspensi […]

Lucknow, Aug 4 : The body of a clerk in the Public Works Department (PWD) here was found in the office under suspicious circumstances, late on Wednesday night. According to Sapna, the wife of th […]

Kanpur (Uttar Pradesh), Aug 4 : An inquiry has been ordered after an audio clip went viral on social media in which a police official is heard threatening a trader that he will be 'sent to Pakistan'. […]

'Sanatan Dharma' to be included in AMU curriculum

Aligarh, Aug 4 : After the Allahabad University decided to introduce courses in Hindu astrology and rituals, now the Aligarh Muslim University (AMU) will include 'Sanatan Dharma', along with other rel […]