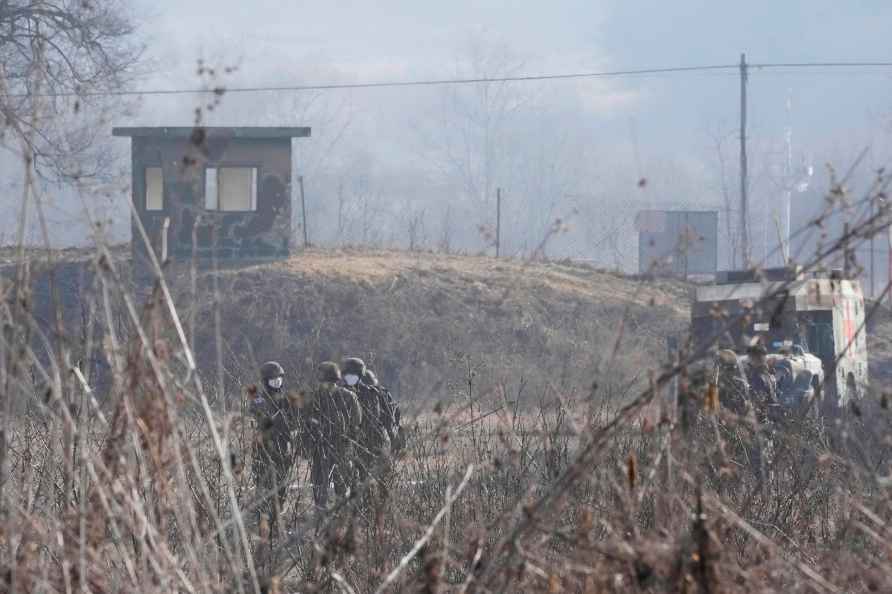 [Paju: South Korean army soldiers are seen in Paju, near the border with North Korea, South Korea, Thursday, Jan. 27, 2022. North Korea on Thursday fired at least two suspected ballistic missiles into the sea in its sixth round of weapons launches this month, South Korea's military said. /PTI] Seoul, Jan 27 : North Korea fired two apparent short-range ballistic missiles toward the East Sea on Thursday, South Korea's military said, in Pyongyang's sixth such launch this year. The Joint Chiefs of Staff (JCS) said it detected the launch from in and around Hamhung, a city on its east coast, at around 8 a.m. It did not elaborate further, Yonhap news agency reported. "Our military is keeping close tabs on related North Korean movements and maintaining a readiness posture," the JCS said in a message sent to reporters. Pyongyang apparently test-fired at least two cruise missiles from an inland area on Tuesday following four reported rounds of weapons tests, including hypersonic missile launches on January 5 and 11. It also tested the KN-23 missile -- modeled after Russia's Iskander ballistic missile -- on January 14 and its own version of the US' Army Tactical Missile System (ATACMS), called the KN-24, three days later. The recent bouts of the North's "saber-rattling" came as the US has been stepping up sanctions pressure amid a protracted deadlock in its nuclear negotiations with the recalcitrant regime. Last Friday, US President Joe Biden and Japanese Prime Minister Fumio Kishida condemned the North's missile launches this month during their virtual summit, the White House has said, though US officials have continued to signal openness for dialogue. A day ahead of the summit, a defiant Pyongyang made a thinly-veiled threat to lift its yearslong moratorium on nuclear and long-range missile tests, sparking speculation it would engage in more provocative actions down the road. /IANS

Join Sweden Summit to 'pioneer the possible'
[The US dock landing ship "USS Gunston Hall" enters the Kiel Fjord in Germany, Friday, June 17, 2022 after the Baltic Operations (BALTOPS) maneuver on

London, June 17 : The 'House of Cards' star Kevin Spacey has made his first appearance in a UK criminal court on charges of sexual assault. In May 2022, the Crown Prosecution Service (CPS), simi […]

There is a possibility that J-K assembly elections can be held by year-end, says Defence Minister Rajnath Singh.

There is a possibility that J-K assembly elections can be held by year-end, says Defence Minister Rajnath Singh. […]

London, June 17 : Former England spinner Monty Panesar feels skipper Ben Stokes will give left-arm tweaker Jack Leach a few more opportunities to prove himself, and if the 30-year-old is still not abl […]