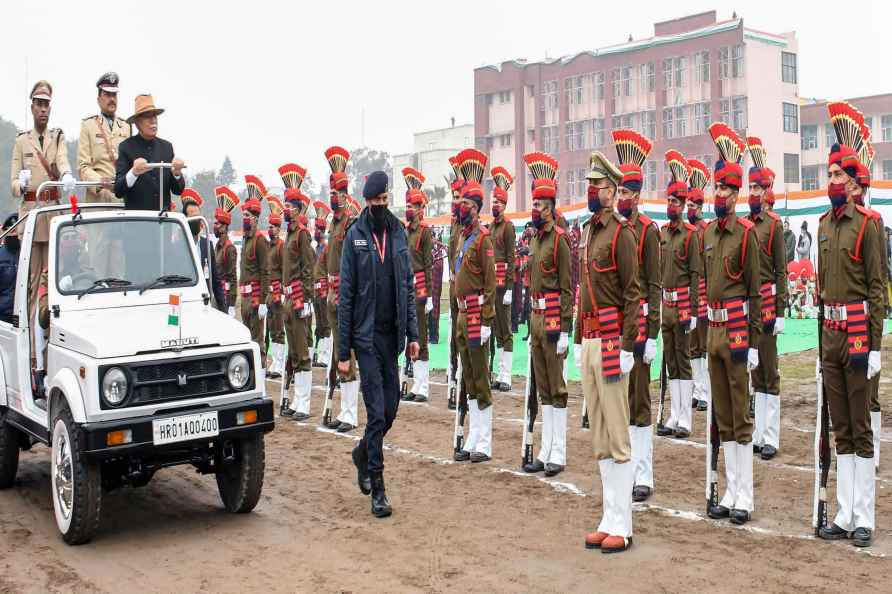 [Ambala City: Haryana Chief Minister Manohar Lal reviews the parade of contingents on the occasion of 73rd Republic Day function in Ambala City, Wednesday, Jan. 26, 2022. ( /PTI] Chandigarh, Jan 26 : Punjab, Haryana and Chandigarh on Wednesday celebrated the 73rd Republic Day amid tight security arrangements, foggy climatic conditions and Covid-19 restrictions. It was foggy and cloudy skies since early morning at most places in Punjab and Haryana, including Chandigarh. Contingents of police, home guards, NCC and others took part in the parade held at district headquarters in both the states and Chandigarh. Punjab Governor Banwarilal Purohit unfurled the national flag at a state-level function at Mohali near here. Haryana Governor Bandaru Dattatreya unfurled the national flag at Panchkula, while Chief Minister Manohar Lal Khattar hoisted the national flag at Ambala. Punjab Chief Minister Charanjit Singh Channi unfurled the national flag in Jalandhar. Both Chief Ministers conveyed greetings to people on the occasion. "It is important to remember the core values of sovereignty, socialism, secularism, democracy, justice, equality, human dignity & the unity, which are the bases of our constitution. Let us pledge to uphold and safeguard these values," Channi said in a tweet. Haryana Governor Dattatreya tweeted, "On 73rd #RepublicDay, I convey my heartiest greetings to the people of Haryana and the country. Let's resolve and make our best efforts to preserve and promote the spirit of equality, justice, fraternity and liberty, the four key pillars of #Constitution,". Deputy Chief Minister Dushyant Chautala hoisted the national flag at Jind in Haryana. Various events were held in district headquarters in Punjab and Haryana, including Amritsar, Ludhiana, Jalandhar, Moga, Bathinda, Panchkula, Karnal and Panipat. Ministers of Punjab and Haryana presided over the celebrations in district headquarters. /IANS

Stage is set for OTT release of 'RRR'
Hyderabad: Jr NTR and Ram Charan's epic 'RRR' will be released on ZEE5 on May 20. 'RRR' the S.S. Rajamouli-directed film that took the country by

Sanjay Dutt's mantra: Nobody cares about your story till you win, so win!
Bengaluru: Sanjay Dutt, who is known for his personal charisma and physique, has yet again impressed with his performance in 'KGF: Chapter 2'. The