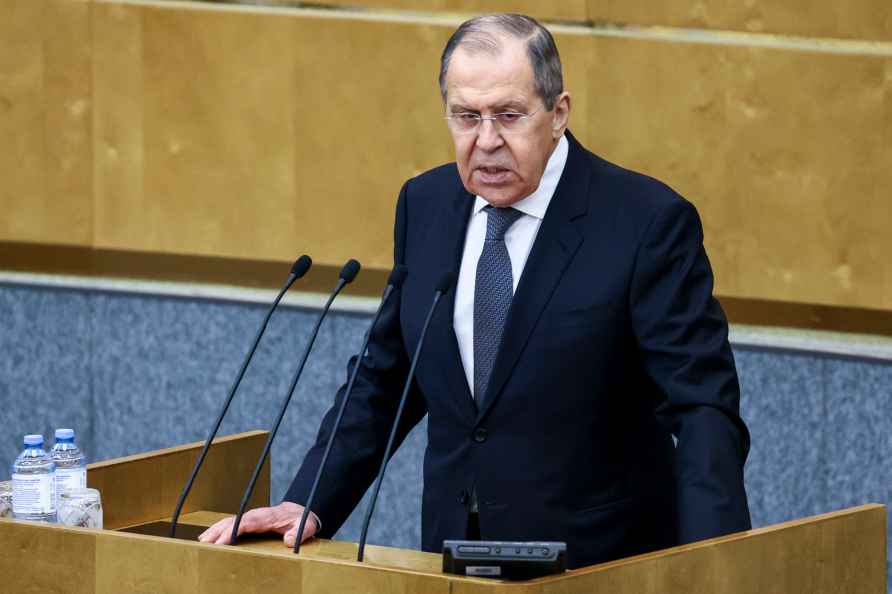 [Moscow: In this handout photo released by Russian Foreign Ministry Press Service, Russian Foreign Minister Sergey Lavrov addresses the State Duma, the Lower House of the Russian Parliament in Moscow, Russia, Wednesday, Jan. 26, 2022. Lavrov said he and other top officials will advise President Vladimir Putin on the next steps after receiving written replies from the United States to the demands. Those answers are expected this week ....... even though the U.S. and its allies have already made clear they will reject the top Russian demands /PTI] Washington/London, Jan 26 : Upping the ante amid prevailing tensions over Ukraine, US President Joe Biden has warned that Russian President Vladimir Putin could be sanctioned personally if he sends troops into Ukraine even as representatives of Russia, Ukraine, France and Germany were due to meet on Wednesday for talks. In a brief interaction with mediapersons on Tuesday, Biden said "Yes" when asked if sanctions could be imposed on the Russian President personally if his country invades Ukraine, adding that such a move would mean "enormous consequences worldwide". He also said that the US could commit more military strength in eastern Europe in case of any Russian invasion, but ruled out sending them to Ukraine itself, though military supplies, including anti-tank missiles, have been sent. The US has also put around 8,500 troops on alert. The UK has also been hawklike on the situation and on Wednesday, its Foreign Minister Liz Truss told the BBC that the Boris Johnson government has "ruled nothing out" -- including sanctions against the Russian leader -- adding that the UK is looking to "toughen up" its sanctions on people, banks and businesses. Reacting to Biden's threats, Putin's spokesman Dmitry Peskov said such sanctions would not be "painful" for the President but would be "politically destructive", the BBC reported. At the heart of the dispute is Russian troop concentrations on Ukraine's borders, with the West claiming Russia is poised to invade, but Russia has denied any such intent. On the other hand, Russia demands that Ukraine not be inducted into NATO, like many other ex-Soviet states and formerly Communist countries of Central and East Europe, and the alliance should not station advanced weapons near its borders, but NATO says it cannot accept a Russian veto over its functioning. /IANS