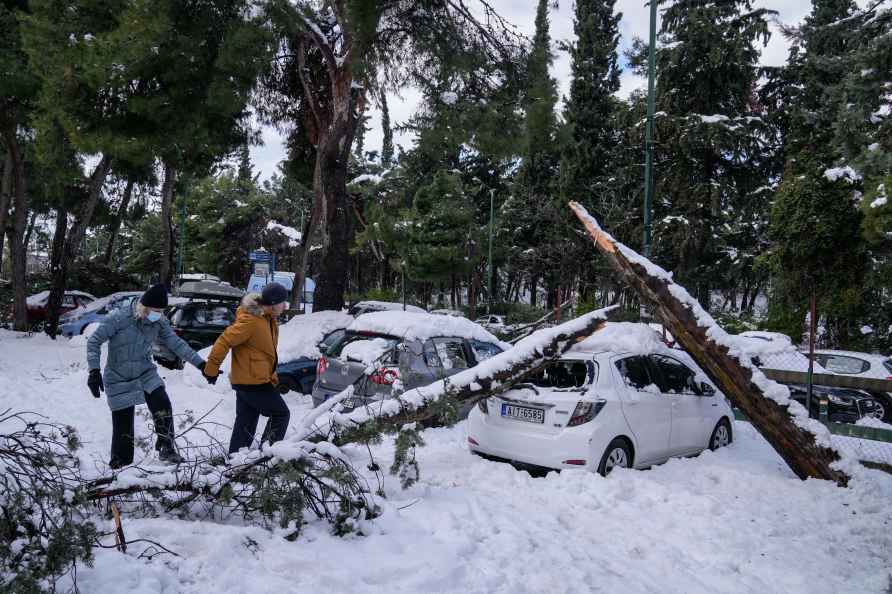 [Athens: A couple walks past a fallen tree on a parked vehicle, in Athens, after a snowstorm on Tuesday, Jan. 25, 2022. A snowstorm of rare severity disrupted road and air traffic Monday in the Greek capital of Athens and neighboring Turkey's largest city of Istanbul, while most of Greece, including ....... unusually ....... several Aegean islands, and much of Turkey were blanketed by snow. /PTI] Athens, Jan 25 : An intense cold wave has gripped Greece, causing travel disruptions and power outages for several hours in many regions due to heavy snowfall, local authorities said. The government has announced widespread closures across the public and private sectors on Tuesday, reports Xinhua news agency. The Acropolis hill and the thoroughfares in the capital Athens, and even the city's southern seaside suburbs, were covered in a thick blanket of snow. Uncharacteristically, the bad weather even brought snow to several Aegean Sea islands. The Attica region, the island of Crete and many Aegean Sea islands were in "a state of special mobilization of Civil Protection", Climate Crisis and Civil Protection Minister Christos Stylianides announced. The state crisis management mechanism has been activated, citizens have been advised to avoid unnecessary travel. "We need to take all precautions to avoid casualties," Stylianides said. Travel disruptions have been reported nationwide. The snowfall temporarily paralyzed traffic on the country's highways, ships remained docked at ports and flights have been cancelled, the Greek national news agency AMNA reported. The army was mobilised to assist the Fire Brigade and police in evacuating hundreds of motorists stranded for hours on highways in the greater Athens area. Drivers were urged to use snow chains even in the centre of the Greek capital. Greek national broadcaster ERT reported that three passengers were slightly injured in a train collision. "So far we have had a few power cuts only. Tomorrow will also be a difficult day. We all will have to stay on alert," Stylianides told a press conference. In several parts of the country, schools will remain closed on Tuesday and shift to online classes. Public sector services and private companies also shifted to teleworking, as the Civil Protection warned citizens against unnecessary movement. Meteorologists said that the cold wave will start receding on Wednesday. /IANS

Many MP panchayats settle for monetary incentives to elect office-bearers unopposed
[Bhopal: Madhya Pradesh Chief Minister Shivraj Singh Chouhan meets the woman who was allegedly attacked with a blade after she was harassed by some mi

Seoul, June 11 : The defence chiefs of South Korea, the US and Japan discussed combined military exercises, including missile warning drills, during their talks in Singapore on Saturday amid North Kor […]

S. Hussain Zaidi: Mafia had a stranglehold over film financing, but that's changing

By Vishnu Makhijani New Delhi, June 11 : From the 1980s to the late 1990s, the Mumbai mafia had a stranglehold over the financing of films, but all thats changing with the entry of corporate product […]