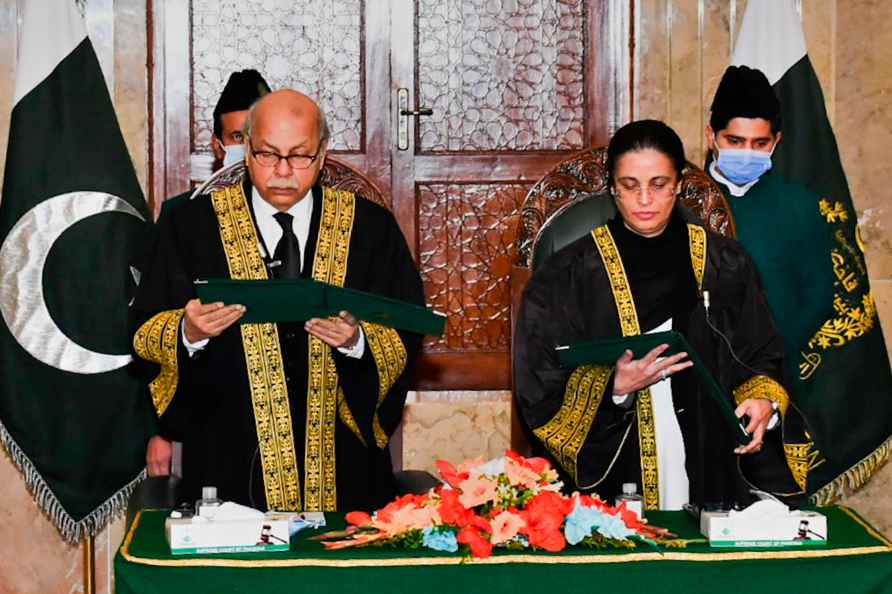 [Islamabad: In this photo provided by Pakistan's Press Information Department, Pakistan's Chief Justice Gulzar Ahmad, left, administrates the oath of office to Ayesha Malik, the first female judge of the Supreme Court of Pakistan, during a ceremony, in Islamabad, Pakistan, Monday, Jan. 24, 2022. Malik's swearing-in on Monday was a landmark moment for the Islamic nation where women often struggle to get justice ?Äî especially in cases involving sexual assault. /PTI] Ouagadougou, Jan 25 : Amid ongoing unrest and a coup in Burkina Faso, a tweet was sent out by President Roch Kabore's official account calling on the army to lay down arms and to safeguard democratic achievements. "Our nation is going through difficult times. At this precise moment, we must safeguard our democratic achievements. I invite those who have taken up arms to lay them down in the higher interests of the nation. It is through dialogue and listening that we must resolve our contradictions," read the tweet posted on Monday. Earlier on Monday, Burkina Faso's Army said that it had ousted President Kabore, suspended the Constitution, dissolved the government and the national assembly, and closed the country's borders. Kabore has been detained and taken to a military camp following the mutiny, a security source has confirmed. Also in the day, the ruling party of Burkina Faso, People's Movement for Progress (PMP) announced that the President survived a "failed assassination attempt". On Sunday, a nationwide curfew was imposed in Burkina Faso, following reports of gunfire in some barracks in the morning. Another statement, from the Minister of National Education, announced the closure of schools on Monday and Tuesday. Gunshots were heard early Sunday morning in barracks in the capital Ouagadougou and other cities. The government confirmed the gunfire but had denied reports on social media about an army takeover. UN chief Antonio Guterres has condemned the coup and called on the military to "ensure the protection and the physical integrity" of Kabore. The African Union and regional bloc, Economic Community of West African States, have also condemned the forceful takeover of power, with the latter saying it holds the soldiers responsible for the deposed President's well-being. The coup camea week after 11 soldiers were arrested for allegedly plotting to overthrow Kabore. Burkina Faso is now the third West African country to witness a military takeover in recent years. Guinea and Mali have had sanctions imposed on them by Ecowas to press them to return to constitutional order. /IANS

Pooja Hegde on making more films for women, inspiring Indian girls to dream big
[A banner is unveiled with a list of names and that reads at the end "129 feminicides since the last Cannes festival" at the premiere of the film 'Hol

Los Angeles, May 22 : Hollywood star Simu Liu has revealed how he felt devastated after he was not cast in 'Crazy Rich Asians'. In a new interview, the 'Shang-Chi and the Legend of the Ten Rings […]

Mumbai, May 22 : The makers of Rubina Dilaik-starrer 'Ardh' have released the first song titled 'Ishq Ka Manjha' on Sunday, on the birthday of the debutant director of the film Palaash Muchhal. […]

Srinagar, May 22 : A youth from Jammu and Kashmir's Anantnag district became a millionaire overnight by winning Rs 2 crore in the online fantasy cricket platform Dream11. Belonging to Shalgam vi […]

Jakarta, May 22 : Defending champions India will open their campaign in Asia Cup hockey in a high-octane clash against arch-rivals Pakistan on Monday at the GBK Arena, the same venue as the Asian Game […]