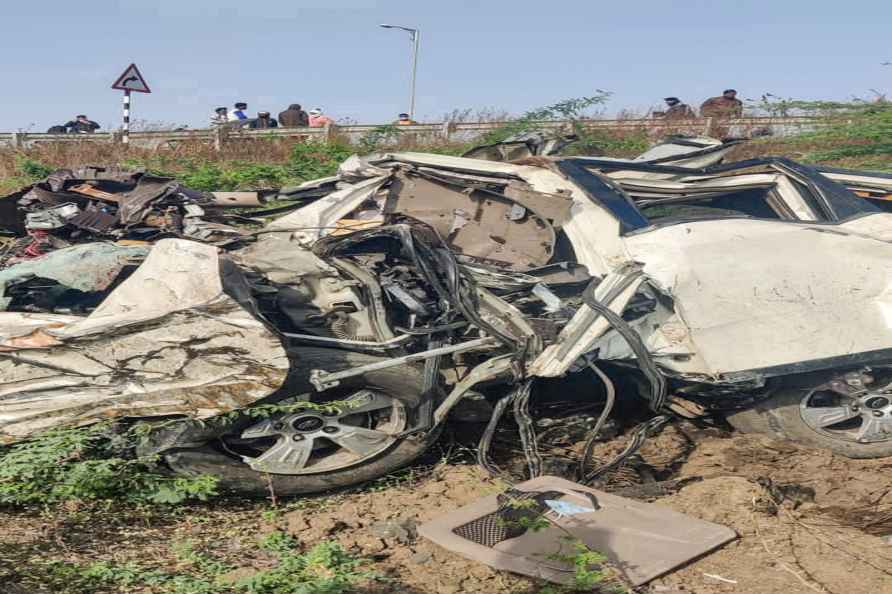 [Wardha: Mangled remains of a car which fell into the Yashodha River off a bridge, at Deoli near Wardha, Tuesday, Jan 25, 2022. Seven medical students died in the accident. ( /PTI] Nagpur, Jan 25 : In a shocking accident, at least seven medical students were killed when their SUV lost control and plunged off a bridge into a river. The accident happened late on Monday, officials said. According to police, the accident took place on a river bridge near Selsura around 11.30 p.m. when they were travelling from Deoli to Wardha. At one stretch on the bridge, the vehicle driver lost control and the SUV broke the barriers to crash into the river below. Among the 7 victims -- all studying in the Savangi Medical College, Wardha -- is Avishkar, a first year MBBS sutdent and the son of Tirora BJP MLA Vijay Rahangdale, said the police. The other victims are final year MBBS students Pratyush Singh, Shubham Jaiswal, Neeraj Chauhan and Vivek Nandan, Pawan Shakti doing his first year MBBS and a medical intern Nilesh Singh. The SUV was taken out of the river by a rescue team early today, and further probe is underway by the Wardha Police. /IANS

Mumbai, June 6 : The romantic drama film 'Ishq-E-Nadaan' recently wrapped up its final schedule. The film is the directorial debut of Avishek Ghosh, who has earlier produced Bengali films. 'Ishq […]

**EDS: HANDOUT PHOTO MADE AVAILABLE FROM J&K Police ON TUESDAY, JUNE 6, 2022** Sopore: A Lashkar-i-Toiba militant was killed in a gunfight at Zaloora area of North Kashmir?s Sopore on Monday. ( /PTI […]