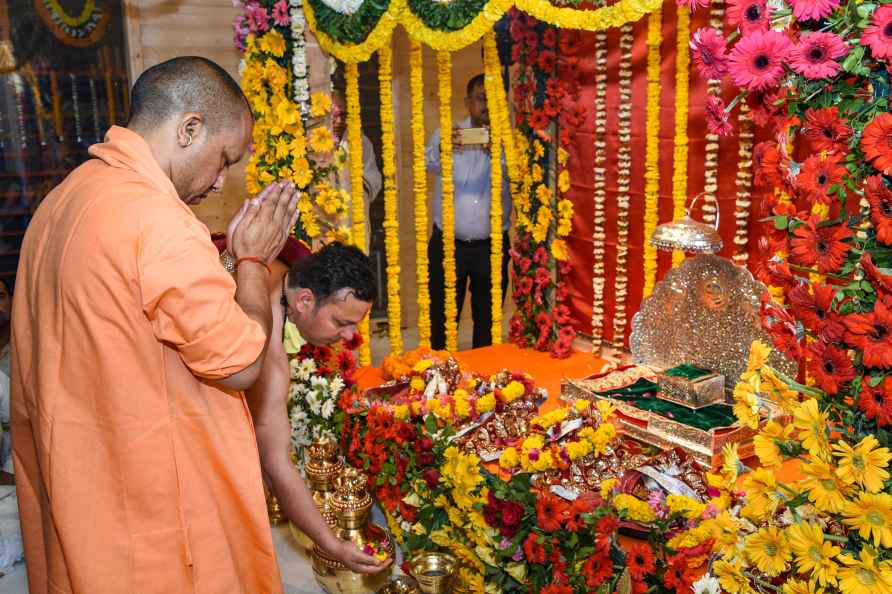 Ayodhya, Jan 25 : At a time when all saints in Ayodhya wanted Uttar Pradesh Chief Minister Yogi Adityanath to contest the upcoming Assembly elections from Ayodhya, the chief priest of the Ram Temple, Acharya Satyendra Das, has said it is good that Adityanath is not contesting from this Assembly constituency as he would have faced a lot of opposition. Das told media that he has suggested that the Uttar Pradesh Chief Minister should contest elections from Gorakhpur instead, as people whose houses and shops were demolished in Ayodhya due to infrastructure projects in the wake of the construction of the Ram temple, were opposing him. Acharya Satyendra Das said he advised that Yogi Adityanath should not contest from Ayodhya "after asking 'Ram Lalla' (Lord Ram)". "It is good that Yogi Adityanath is not contesting from here. I had suggested it earlier and advised that it will be better that he contest from any Assembly seat of Gorakhpur. I speak after asking Ram Lalla. I speak with Ram Lalla's inspiration," said Das, who is the chief priest of the makeshift Ram Lalla temple, which is now being replaced by a grand temple. The 84-year-old priest added that the seers here are divided in their opinion and those whose houses and shops were demolished are against the Uttar Pradesh Chief Minister. "This opposition is there. He ( Yogi Adityanath) would have won from here (Ayodhya) but could have also faced problems," he said. The priest, however, added that the ruling BJP will not let go the Ram temple issue and it will remain on their agenda. "Earlier, there was Ram Lalla movement, then came the court's order and the construction of the Ram temple started. This Ram temple issue will never go away. They will say firing was opened here on karsevaks, application was moved in the court to prevent the construction -- but the temple construction is on. They (BJP) will certainly take the name of Ram temple. This will not go away," Das said. Das hopes to see the Ram temple completed in his lifetime. "Let us see how many days it takes for the construction to complete. Majority of those who were with me have passed away. I will serve here till my last breath," he said. Das had joined as the priest of the makeshift Ram Lalla temple in 1992, the year the Babri Masjid was demolished. When asked whether any party candidate had come to take his blessings, Das added, "Till now, wife of Samajwadi Party (SP) leader Pawan Pandey has come to me. He is a strong candidate from the SP." Ayodhya will go to the polls in the fifth phase on February 27. /IANS

G-Pay transaction helps Goa police nab killer
Panaji, May 17 : With no information about the accused who fled from the spot after killing a 30 year-old-woman in a guest house at Arambol in north G

New Delhi, May 18 : The Centre has decided to deploy additional security forces in the Kashmir Valley in wake of the recent killing of minorities in the Union Territory, security sources said here. […]

San Francisco, May 17 : Apple is reportedly testing the use of a colour display from E Ink as an external screen for an unannounced foldable device. Analyst Ming-Chi Kuo said that the tech giant […]