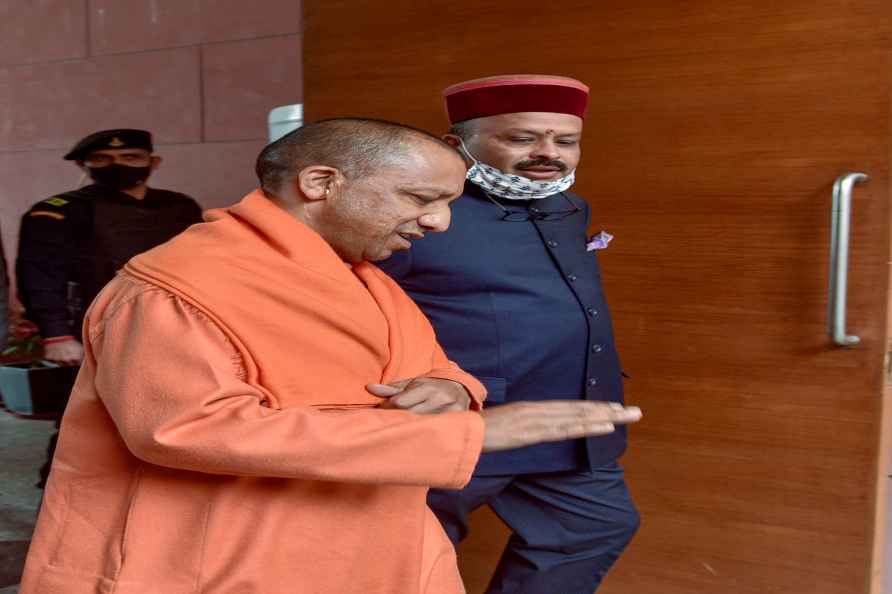 [New Delhi: Uttar Pradesh Chief Minister Yogi Adityanath arrives to attend the BJP Central Election Committee meeting, at the BJP HQ in New Delhi, Tuesday, Jan. 25, 2022. ( /PTI] New Delhi, Jan 25 : Knowing the importance of women voters for winning the Uttar Pradesh Assembly polls for the second consecutive terms, the BJP is holding a 'Mahila chaupal' and 'kirtan' across the state. The saffron party believes that women voters will play a crucial and decisive role in next year's poll as they constitute nearly half (46 per cent) of the total electorate of state and their participation has increased over a period of time. In the last 2017 Assembly polls, over 60 per cent women cast their vote, more than the men. The BJP women wing is organising 'Mahila Chaupal' and 'Kirtan' at block and village levels in Uttar Pradesh along with other reach out programmes in which they interact with the beneficiaries of government schemes and appeal to vote for the party in Assembly polls. BJP Mahila Morcha national vice president Rekha Gupta told IANS that the party is reaching out to the women voters through 'Mahila Chaupal' and 'Kirtan'. "We are organising a series of programmes to reach out to women voters and 'Mahila Chaupal' and 'Kirtan' are two of them. In chaupal, all the attendees are beneficiaries of the government schemes. Similarly, we are reaching out to women through kirtan mandali (group). These programmes are done at village and block levels," Gupta said. According to Gupta, office-bearers of the mahila morcha interact with the beneficiaries following the Covid protocols and guidelines led by the Election Commission. "We tell them the people are with Chief Minister Yogi Adityanath for tremendous work he has done in the last five years under the leadership of Prime Minister Narendra Modi. We explain that no government has done so much work in this short span of five years. We appeal to them to elect the BJP government to take Uttar Pradesh to a new height of development under a double engine government," Gupta said. Women voters played an important role in the BJP victory in 2017 Uttar Pradesh Assembly polls and ensured the return of the Modi government at the Centre in 2019. Knowing that they will also play an important and decisive role in this poll, the BJP is leaving no stone unturned to win their support. The Uttar Pradesh Assembly polls will be held in seven phases in February-March starting from February 10. Counting of votes will be held on March 10. /IANS

Aaditya Thackeray in UP today for 'non-political' Ayodhya trip

Mumbai, June 14 : The Securities Appellate Tribunal (SAT) has directed the SEBI to conduct an independent inquiry against five brokers and persons associated with the brokers, and probe their role in […]

New Delhi, June 14 : A Delhi court on Tuesday allowed the Punjab Police to arrest gangster Lawrence Bishnoi in connection with the murder of Punjabi singer Shubhdeeep Singh aka Sidhu Moosewala. […]