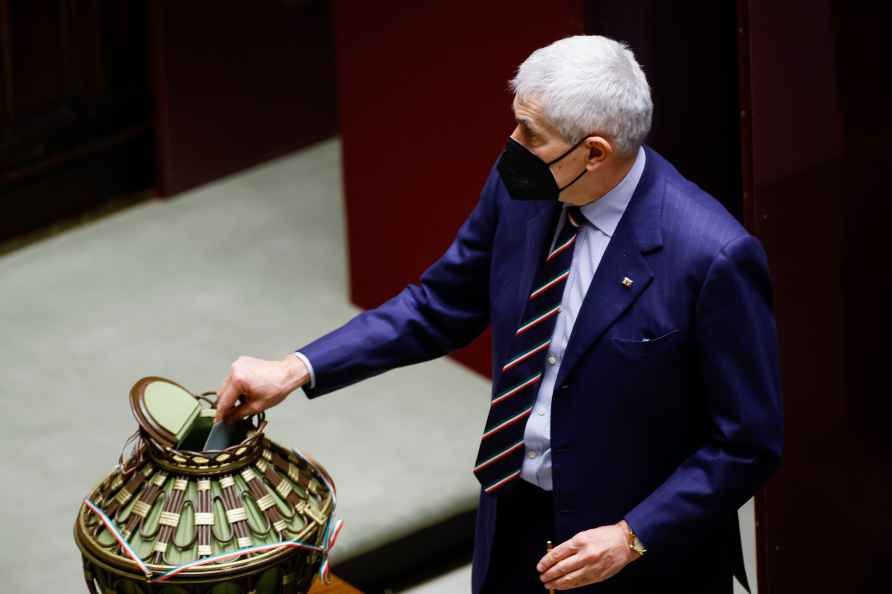 [Rome: Menber of Parliament Pierferdinando Casini casts his ballot in the Italian parliament, Monday, Jan. 24, 2022, where the 13th president of Italy will be elected. The first round of voting for Italy's next president opens Monday without a clear slate of candidates. Political parties held internal meetings over the weekend, but were keeping the names of possible candidates close to their vests. /PTI] Kochi, Jan 24 : In what is seen as a severe setback to SNDP Yogam General Secretary Vellapally Natesan, the Kerala High Court on Monday ruled that the present election system of electing office bearers to it through representation vote should be removed and instead, all members should be given the right to vote. The election to elect a new set of office-bearers was to take place on February 5 and with this ruling, things appear to have not gone well for Natesan. The high court also apparently quashed the special concession and bylaw amendment granted by the Central government in 1974 under the Companies Act. Natesan has been at the helm of the SNDP Yogam - the socio-cultural body of the powerful Hindu Ezhava community and having about 2.8 million members - for the past quarter of a century. His adversaries have been trying their best to break his dominance in the SNDP Yogam, which is stacked up by his family members and those close to him. But with the voting policy of one vote for every 200 members, Natesan has been able to keep all those who have been trying to contest against him - Gokulam Gopalan, C.K. Vidyasagar, Biju Ramesh, to name a few - out of the fray. Reacting to the verdict, Vidyasagar, a former President of the organisation, said this is what was wanted by all and through this the democratic traditions of the Yogam will return. "This new order will enable all members of the Yogam to cast their votes. Its definitely a challenge to conduct the election with all members casting their votes. A system has to be put in place for the smooth conduct," he said. Ramesh accused Natesan was winning all along by tampering with the voters list and the agents of the opposing candidates were not even allowed to do their job. "Now that all members will be able to cast their votes, Natesan will not even get 10 per cent of the votes," he said. Natesan said it is sad and unfortunate such a verdict has come and will react after studying the verdict. His son Tushar Vellapally is the Vice President of the Yogam and is also the President of the BDJS, a political outfit, which is the second biggest constituent of the BJP-led NDA in Kerala. He he had contested the 2019 Lok Sabha elections as his party candidate against Rahul Gandhi in the Wayanad Lok Sabha constituency. Sources close to Natesan points out that he, in all likelihood will go in appeal against the single bench verdict that came on Monday. /IANS

Section-144 clamped in Jaipur, Kota and Dholpur in view of Agnipath protests

Jaipur, June 20 : In view of the ongoing protests against the Agnipath scheme, Section-144 has been promulgated in Jaipur under the jurisdiction of the Police Commissionerate. As per the orders, […]