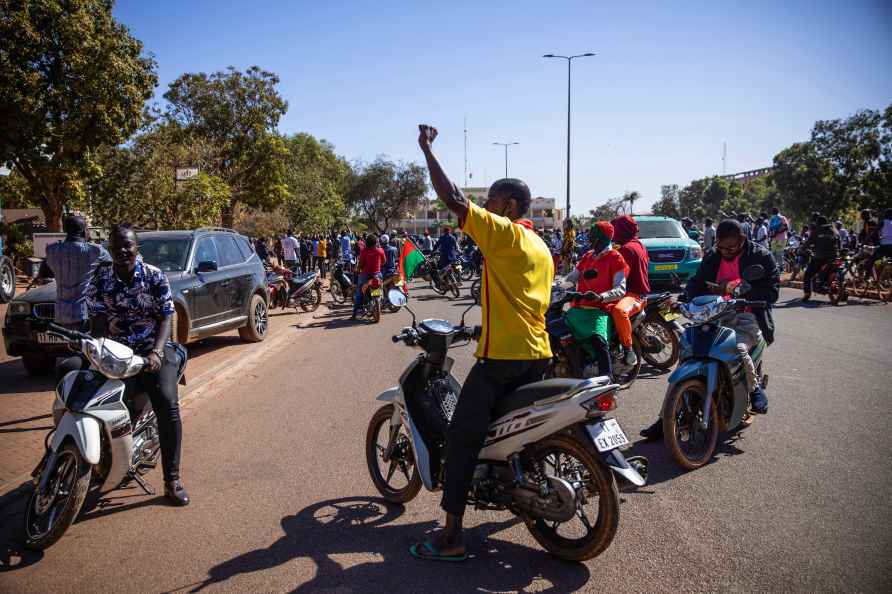 [Ouagadoudou: People cheer in support of putschist soldiers near the national television station in Ouagadougou, Monday Jan. 24, 2022. Two mutinous soldiers told The Associated Press that Burkina Faso.......s President Roch Marc Christian Kabore is being held by the rebellious soldiers. Gunshots rang late Sunday night near the president.......s residence and in the early hours of Monday a battle took place at the presidential palace while a helicopter flew overhead. /PTI] Ouagadougou, Jan 24 : A nationwide curfew was imposed in Burkina Faso following reports of gunfire in some barracks, according to a decree signed by President Roch Marc Christian Kabore. Another statement from the minister of national education announced the closure of schools on Monday and Tuesday, reports Xinhua news agency. The curfew imposed from 8.30 p.m. on Sunday night to 5.30 a.m. was imposed hours after gunshots were heard earlier in the morning in barracks in the capital Ouagadougou and other cities. Burkina Faso's government confirmed the gunfire but denied the information on social media about the army takeover. Defence Minister General Barthelemy Simpore declared on state television that the situation was under control, denying rumours that the President had been detained by soldiers. According to local sources, later in the day, the headquarters of Burkina Faso's ruling party in Ouagadougou was set on fire by protesters. Internet was partially cut off. The Economic Community of West African States (ECOWAS) has called for calm and reaffirmed its support for President Kabore. /IANS

Rupee slumps 14 paise to close at all-time low of 77.75 (provisional) against US dollar.

New Delhi, May 19 : The Resident Doctors of Lady Hardinge Medical College (LHMC) have announced to withdraw from all services, routine as well as emergency, from Thursday in view of intimidation and p […]