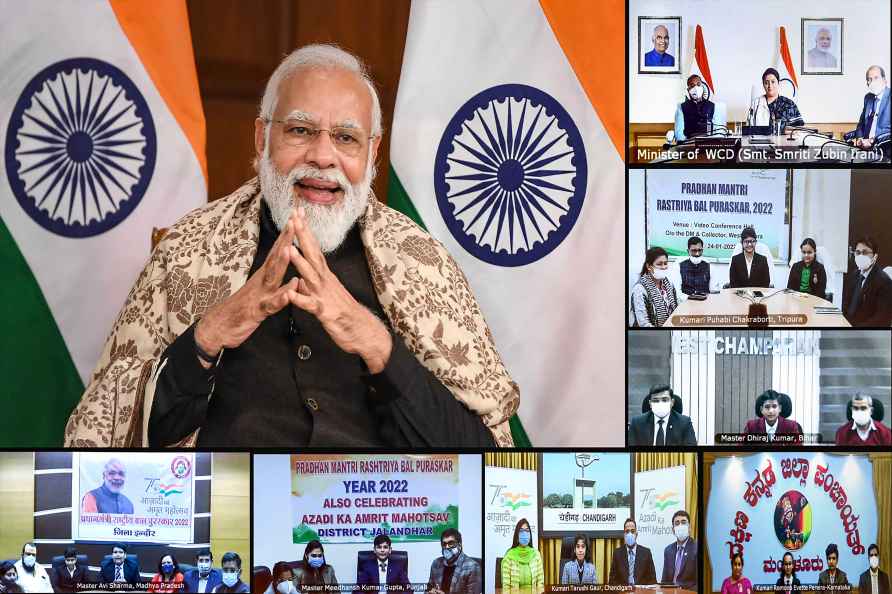 [**EDS: HANDOUT PHOTO MADE AVAILABLE FROM PMO** New Delhi: Prime Minister Narendra Modi with the Pradhan Mantri Rashtriya Bal Puraskar (PMRBP) awardees, through video conferencing, in New Delhi, Monday, Jan. 24, 2022. ( /PTI] New Delhi, Jan 24 : Prime Minister Narendra Modi on Monday said that children of India have shown their modern and scientific temperament in the vaccination programme and since January 3, in just 20 days, more than 40 million of them have taken the Corona vaccine. Prime Minister Modi made the observation while virtually interacting with Pradhan Mantri Rashtriya Bal Puraskar (PMRBP) awardees. Digital certificates were conferred on the PMRBP awardees for the years 2022 and 2021 using 'Blockchain Technology'. The technology was used for the first time for giving certificates to awardees. Union Women and Child Development Minister Smriti Irani and minister of state Dr Munjpara Mahendrabhai were among those present on the occasion. "Children of India have shown their modern and scientific thinking in the vaccination program as well. Since January 3, in just 20 days, more than 40 million children have got the Covid vaccine," he said. He also lauded children for their leadership in the Swachch Bharat Abhiyan. The Prime Minister appealed to them to be an ambassador for 'Vocal for Local' and lead the campaign of 'Aatmnirbhar Bharat'. Addressing the gathering, the Prime Minister noted that these awards become all the more significant in the light of the fact that they have been conferred during the important period when the country is celebrating 'Azadi Ka Amrit Mahotsav'. "This is the time to draw energy from the past and dedicate oneself to achieving great results in the coming 25 years of the Amrit kaal," he said. The Prime Minister remembered the glorious history of the Freedom Struggle and the contribution of Birbala Kanaklata Barua, Khudiram Bose and Rani Gaidinilu. "These fighters had made the country's freedom the mission of their lives at a very young age and had dedicated themselves for it" the Prime Minister said. The Prime Minister cited examples of the bravery and sacrifice of the sons of Guru Gobind Singh. He pointed out that when the Sahibzadas had sacrificed with immense valour, they were very young and their sacrifice for India's civilization, culture, faith and religion is incomparable. The Prime Minister asked the youngsters to know more about the Sahibzadas and their sacrifice. The Prime Minister mentioned that a digital statue of Netaji Subhas Chandra Bose has also been installed near India Gate in Delhi. "We get the biggest inspiration from Netaji - duty of the nation first. Taking inspiration from Netaji, you have to proceed on the path of duty for the country," he said. The Prime Minister said that Youth is at the centre of all policies and initiatives of the government. He cited initiatives like 'Start Up India', 'Stand Up India', 'Digital India', 'Make in India' along with Jan Andolan of Aatmnirbhar India and creation of modern infrastructure. This is in sync with the speed of the youth of India who are leading this new epoch both in India and outside, the Prime Minister said. He underlined the growing prowess of India in the innovation and start-up sphere. He conveyed the nation's pride in the fact of major global companies being led by Indian young CEOs. "Today we feel proud when we see the youth of India excelling in the world of startups. Today we feel proud when we see that the youth of India are innovating, taking the country forward," he said. PM Modi also greeted the daughters of the country on National Girl Child Day. He said that in areas where they were not even allowed earlier, the daughters are doing wonders in them today. "This is the new India, which does not hold back from innovating. Courage and determination are the hallmarks of India today," he added. /IANS

Russia to stop gas supply to Finland after electricity cut
[FILE - A metallurgical plant is seen on the outskirts of the city of Mariupol, Ukraine, Thursday, Feb. 24, 2022. Russia began evacuating its embassy

Musk sees net worth shrink by $12 bn amid ESG fiasco

San Francisco, May 20 : Tech billionaire Elon Musk recently saw over $12 billion wiped off his net worth following Tesla stock's recent drop and the S&P Global Ratings' decision to boot Tesla from its […]

After US, Canada bans China's Huawei, ZTE from 5G networks

Toronto, May 20 : After the US, Canada has now moved to ban Chinese telecommunication giants Huawei and ZTE from its 5G networks in order to ensure the "long term safety of our telecommunications infr […]