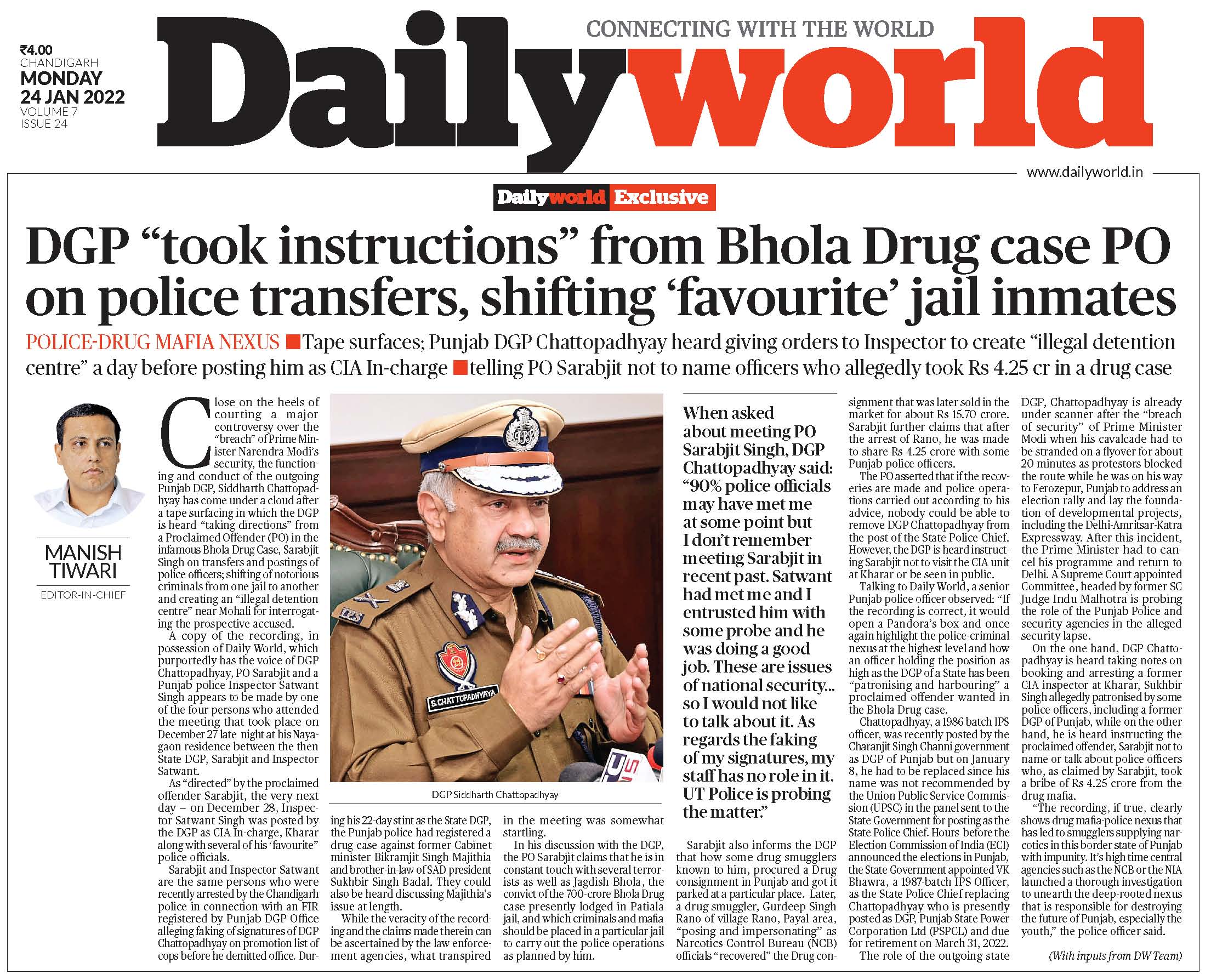 POLICE-DRUG MAFIA NEXUS: Tape surfaces; Punjab DGP Chattopadhyay heard giving orders to Inspector to create “illegal detention centre” a day before posting him as CIA In-charge; telling PO Sarabjit not to name officers who allegedly took Rs 4.25 crore in a drug case Manish Tiwari | Chandigarh Close on the heels of courting a major controversy over the “breach” of Prime Minister Narendra Modi’s security, the functioning and conduct of the outgoing Punjab DGP, Siddharth Chattopadhyay has come under a cloud after a tape surfacing in which the DGP is heard “taking directions” from a Proclaimed Offender (PO) in the infamous Bhola Drug Case, Sarabjit Singh on transfers and postings of police officers; shifting of notorious criminals from one jail to another and creating an “illegal detention centre” near Mohali for interrogating the prospective accused. A copy of the recording, in possession of Daily World, which purportedly has the voice of DGP Chattopadhyay, PO Sarabjit and a Punjab police Inspector Satwant Singh appears to be made by one of the four persons who attended the meeting that took place on December 27 late night at his Nayagaon residence between the then State DGP, Sarabjit and Inspector Satwant. As “directed” by the proclaimed offender Sarabjit, the very next day — on December 28, Inspector Satwant Singh was posted by the DGP as CIA In-charge, Kharar along with several of his ‘favourite” police officials. Sarabjit and Inspector Satwant are the same persons who were recently arrested by the Chandigarh police in connection with an FIR registered by Punjab DGP Office alleging faking of signatures of DGP Chattopadhyay on promotion list of cops before he demitted office. During his 22-day stint as the State DGP, the Punjab police had registered a drug case against former Cabinet minister Bikramjit Singh Majithia and brother-in-law of SAD president Sukhbir Singh Badal. They could also be heard discussing Majithia’s issue at length. While the veracity of the recording and the claims made therein can be ascertained by the law enforcement agencies, what transpired in the meeting was somewhat startling. In his discussion with the DGP, the PO Sarabjit claims that he is in constant touch with several terrorists as well as Jagdish Bhola, the convict of the 700-crore Bhola Drug case presently lodged in Patiala jail, and which criminals and mafia should be placed in a particular jail to carry out the police operations as planned by him. Sarabjit also informs the DGP that how some drug smugglers known to him, procured a Drug consignment in Punjab and got it parked at a particular place. Later, a drug smuggler, Gurdeep Singh Rano of village Rano, Payal area, “posing and impersonating” as Narcotics Control Bureau (NCB) officials “recovered” the Drug consignment that was later sold in the market for about Rs 15.70 crore. Sarabjit further claims that after the arrest of Rano, he was made to share Rs 4.25 crore with some Punjab police officers. The PO asserted that if the recoveries are made and police operations carried out according to his advice, nobody could be able to remove DGP Chattopadhyay from the post of the State Police Chief. However, the DGP is heard instructing Sarabjit not to visit the CIA unit at Kharar or be seen in public. Talking to Daily World, a senior Punjab police officer observed: “If the recording is correct, it would open a Pandora’s box and once again highlight the police-criminal nexus at the highest level and how an officer holding the position as high as the DGP of a State has been “patronising and harbouring” a proclaimed offender wanted in the Bhola Drug case. Chattopadhyay, a 1986 batch IPS officer, was recently posted by the Charanjit Singh Channi government as DGP of Punjab but on January 8, he had to be replaced since his name was not recommended by the Union Public Service Commission (UPSC) in the panel sent to the State Government for posting as the State Police Chief. Hours before the Election Commission of India (ECI) announced the elections in Punjab, the State Government appointed VK Bhawra, a 1987-batch IPS Officer, as the State Police Chief replacing Chattopadhyay who is presently posted as DGP, Punjab State Power Corporation Ltd (PSPCL) and due for retirement on March 31, 2022. The role of the outgoing state DGP, Chattopadhyay is already under scanner after the “breach of security” of Prime Minister Modi when his cavalcade had to be stranded on a flyover for about 20 minutes as protestors blocked the route while he was on his way to Ferozepur, Punjab to address an election rally and lay the foundation of developmental projects, including the Delhi-Amritsar-Katra Expressway. After this incident, the Prime Minister had to cancel his programme and return to Delhi. A Supreme Court appointed Committee, headed by former SC Judge Indu Malhotra is probing the role of the Punjab Police and security agencies in the alleged security lapse. On the one hand, DGP Chattopadhyay is heard taking notes on booking and arresting a former CIA inspector at Kharar, Sukhbir Singh allegedly patronised by some police officers, including a former DGP of Punjab, while on the other hand, he is heard instructing the proclaimed offender, Sarabjit not to name or talk about police officers who, as claimed by Sarabjit, took a bribe of Rs 4.25 crore from the drug mafia. “The recording, if true, clearly shows drug mafia-police nexus that has led to smugglers supplying narcotics in this border state of Punjab with impunity. It’s high time central agencies such as the NCB or the NIA launched a thorough investigation to unearth the deep-rooted nexus that is responsible for destroying the future of Punjab, especially the youth,” the police officer said. ( With inputs from DW Team )

ED to conduct parallel probe to track money trail in WBSSC scam
Kolkata, May 27 : The CBI has now roped in Enforcement Directorate (ED) to track the money trail in the West Bengal School Service Commission (WBSSC)

How much and how often should courts adjudicate matters of religous fervour?
By Adeel Ahmed New Delhi, May 22 : In the old city of Jerusalem, there lies a 187-foot long 'Western Wall, built by Herod on the western flank of t

Hyderabad, June 28 : Telangana Chief Minister K. Chandrasekhar Rao on Tuesday said that his government wants Telangana to be known as the startup state of India and Hyderabad as the startup capital of […]

London, June 28 : England's white-ball captain Eoin Morgan has retired from international cricket with immediate effect, amidst question marks over his form. The southpaw was interested in leadi […]

Antibiotic-resistant MRSA strain can jump from pigs to humans: Study

London, June 28 : A highly antibiotic-resistant strain of the superbug methicillin resistant Staphylococcus aureus, or MRSA, which emerged in pigs in the last 50 years, has the potential to spread to […]

Zubair will be taken to B'luru to recover his electronic devices

New Delhi, June 28 : The Special Cell of Delhi Police will take Alt News co-founder Mohammed Zubair to Bengaluru to recover his laptop which he used to tweet and upload various contents on different s […]