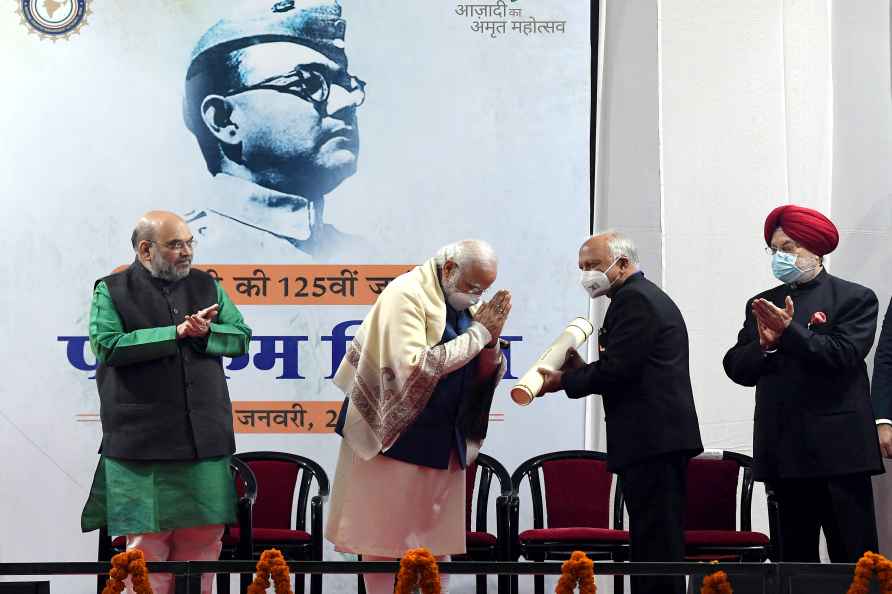 [**EDS: HANDOUT PHOTO MADE AVAILABLE FROM PMO** New Delhi: Prime Minister Narendra Modi during a programme to unveil a hologram statue of Netaji Subhas Chandra Bose and confer Subhas Chandra Bose Aapda Prabandhan Puraskars for 2019 to 2022, in New Delhi, Sunday, Jan. 23, 2022. ( /PTI] New Delhi, Jan 23 : Prime Minister Narendra Modi on Sunday said that it is unfortunate that after Independence, along with the culture and tradition of the country, work was done to erase the contribution of many great personalities. "The penance of lakhs of freedom fighters was sought to be diminished, but now these wrongs are being corrected. "The freedom struggle involved the penance of lakhs of countrymen, but efforts were made to limit their history as well. But today, after decades of independence, the country is correcting those mistakes...," he said, after unveiling a hologram statue of Netaji Subhas Chandra Bose on the occasion of his 125th birth anniversary. Prime Minister Modi, who also gave the Subhas Chandra Bose Aapda Prabandhan Puraskars, said that 'Azadi Ke Amrit Mahotsav' resolved that India will revive its identity and inspirations. "Netaji used to say, 'Never lose faith in the dream of an independent India, there is no power in the world that can shake India'. Today we have a target to build a New India before we complete 100 years of independence in 2047." About his visit to Bose's ancestral house in Kolkata, he said: "It is my good fortune that last year, on this very day, I had the opportunity to visit Netaji's ancestral residence in Kolkata. The car in which he left Kolkata, the room in which he used to study, the stairs of his house, the walls of his house, seeing him, that experience is beyond words. "I cannot forget the moment when I unfurled the flag at Red Fort on October 21, 2018, the day when the Azad Hind Government completed 75 years. It was my good fortune that our government got the opportunity to declassify the files related to Netaji." He said that the the hologram will be replaced by a granite statue. "The statue will not only remind us of our duties towards the nation but also inspire the generations to come," he said. The Prime Minister also said: "We have made all-round efforts to make disaster management more effective. We have not only focused on relief, rescue, rehabilitation but on reforms as well. We strengthened the National Disaster Response Force (NDRF). From space management to planning and management, we adopted best practices. "We have seen a lot of joint military exercises in different countries... But for the first time, India has started the tradition of joint drill for disaster management." /IANS

IPL 2022: RR would be hoping to click in all departments against CSK, says Graeme Smith
[Mumbai: Obed Mccoy of Rajasthan Royals celebrates the wicket of N. Jagadeesan of the Chennai Super Kings during T20 cricket match 68 of the Indian Pr

After 108 years, judgement in land dispute case in Bihar

Patna, May 20 : A district court in Bihar's Bhojpur grabbed headlines for its verdict in a land dispute case, 108 years after it was filed. On March 11, Additional district judge of Arrah Sweta […]

**EDS: SCREENSHOT FROM A TWITTER VIDEO POSTED BY @ArvindKejriwal on FRIDAY, MAY 20, 2022** New Delhi: Launch of remote-controlled fire fighting machines, in Delhi. ( /PTI […]

Kabul, May 20 : The Taliban have ordered female Afghan TV presenters and other women on screen to cover their faces while on air, BBC reported. Media outlets were told of the decree on Wednesday […]

Mumbai, May 20 : Gujarat Titans may have hit a speed-bump in their game against Royal Challengers Bangalore (RCB) on Thursday night, but those following the Hardik Pandya-led side negotiate the tricky […]