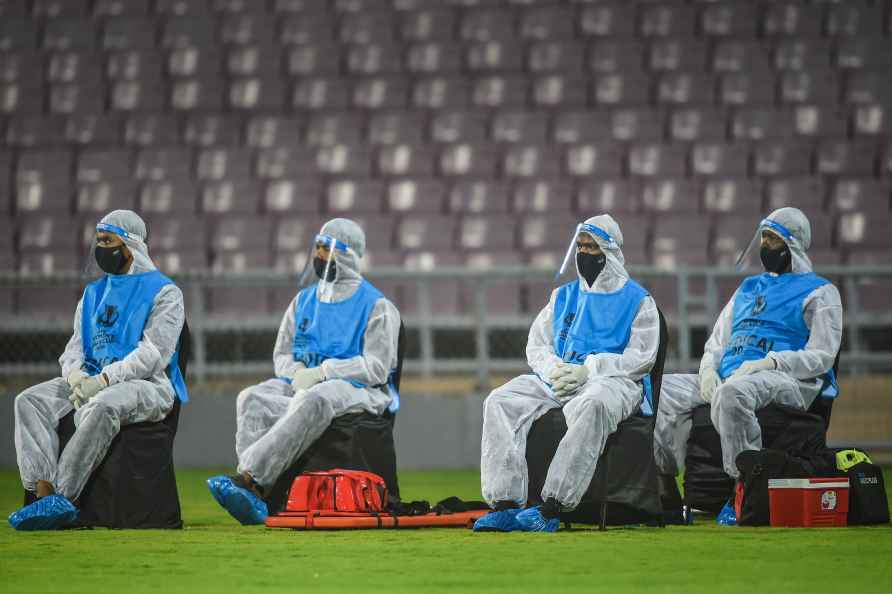 [Mumbai: Medical team waits along the ground before AFC Women's Asian Cup 2022 football match between India and Chinese Taipei, at D.Y. Patil Stadium in Navi Mumbai, Sunday, Jan. 23, 2022. The match has been called off after several Indian players tested positive for COVID-19. ( /PTI] Navi Mumbai, Jan 23 : India had to withdraw from the ongoing AFC Women's Asian Cup football competition on Sunday as the hosts failed to name their team for the match against Chinese Taipei because of injuries and Covid positive tests. The rules specify that a team should be able to put up a bare minimum of 13 players to compete in a match. The Indians had only 11 players fit and available to play Sunday's match against Chinese Taipei at the DY Patil Stadium here. Of the 23 players in the squad, two players had to isolate themselves as they tested positive on the eve of India's opening match in the competition on January 20. Sources said on Saturday, the hosts had 13 players that were not down with Covid-19 but two of them were injured. The two injured players could not recover in time and thus a team could not be named for the match against the Chinese Taipei. "The Asian Football Confederation (AFC) has confirmed that the AFC Women's Asian Cup India 2022 match between Chinese Taipei and India at the D.Y. Patil Stadium in Navi Mumbai could not be played today," the AFC said in a statement on Sunday. "Following several positive cases of Covid-19, India failed to name the required minimum of 13 players for the Group A match against Chinese Taipei," said the statement. "In accordance with Article 4.1 of the 'Special Rules Applicable to AFC Competitions during the COVID-19 pandemic' (Special Rules), India was therefore unable to participate in the match and the full provisions of Article 4.1 will apply," the statement said. Article 4.1 of the 'Special Rules Applicable to AFC Competitions during Covid-19 pandemic' states, "If a Participating Team/Participating Club has less than thirteen (13) Participating Players (including one (1) goalkeeper) available for a Match for any reason (whether or not relating to Covid-19), the relevant Participating Team/Participating Club shall not be able to participate in the Match. Such Participating Team/Participating Club shall be held responsible for the Match not taking place and shall be considered to have withdrawn from the relevant Competition. The relevant Participating Team/Participating Club and its affiliated Member Association shall be subject to the provisions of the relevant Competition regulations regarding the consequences of withdrawal, as applicable." As per this rule, the Indian team is considered to have withdrawn from the competition. Though the said Article 4 has provisions of rescheduling the match, the same could not be done in the case of AFC Asian Cup India 2022 because it is a competition and the schedule is pre-decided. The result of India's previous match against Iran is also considered null and void and Iran can thus now qualify for the playoffs to decide the two best third-placed teams to make it to the quarter-finals. /IANS

Woman lost during 1947 violence meets Sikh brothers after 75 yrs at Kartarpur
[**EDS: TO GO WITH STORY FGN48** Kartarpur: Mumtaz Bibi meets her brothers after getting separated from her family during Partition in 1947, at Kartar

Sanaa, May 19 : Another commercial flight left Yemen's capital of Sanaa held by the Houthi militia shortly after it offloaded passengers from Jordan, as part of the ongoing truce between Yemen's warri […]

World Bank announces up to $30bn to address food insecurity

Washington, May 19 : The World Bank has announced actions it plans to take as part of a comprehensive, global response to the ongoing food security crisis, with up to $30 billion financing in existing […]

US reopens embassy in Ukraine

Washington, May 19 : The US reopened its embassy in Ukraine, Secretary of State Antony Blinken said, three months after it ceased operation in anticipation that Russia would launch a military operatio […]