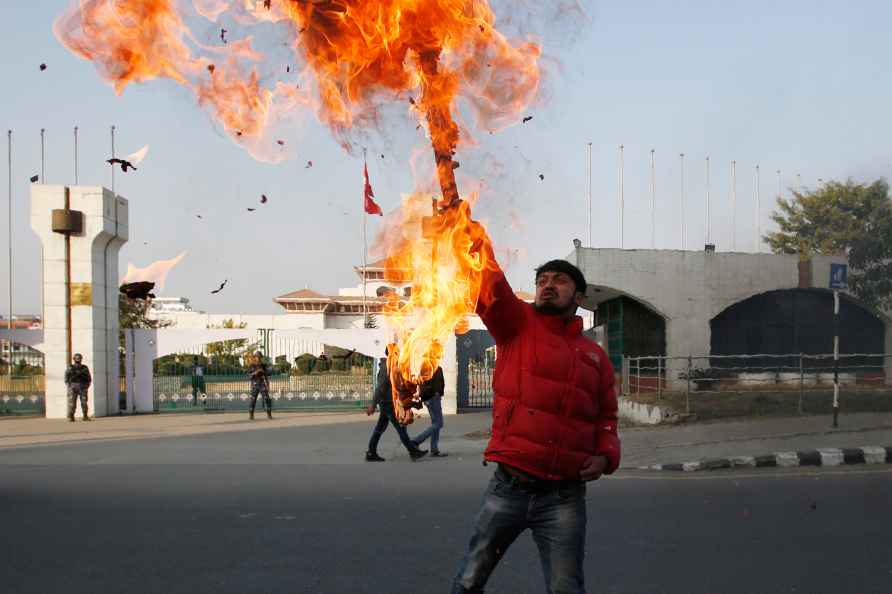 By Sumi Khan Dhaka, Jan 21 : Three cyber criminals, who have sided with war-crime convicts and alleged to have been paid by Pakistan, are obstructing the development of Bangladesh and tarnishing the country's image and also of India's by spreading propaganda on social media platforms, a top intelligence official said. Seeking anonymity, the official told IANS on Friday the three men -- Taj Hashmi, Abu Reza Ahmed Faisal Chowdhury Suyeb, Pinaki Bhattacharya -- are harmful to Bangladesh as well as the countries where they currently reside. According to the official, these men spread propaganda material against Prime Minister Sheikh Hasina, Bangabandhu's family, political parties, Hinduism, Islam, among others. A police official, also on the condition of anonymity, told IANS that the three men are paid agents of Pakistan and they are plotting to obstruct the development of the country, tarnish the image turn it into a failed state and create a congenial atmosphere for war criminals and militancy. In a social media post on April 22, 2021, Taj Hashmi wrote: "This Corona will hasten the downfall of Hasina, her downfall is inevitable." In another post on April 17, said that "Misogyny, the Saudi dynasty, the Hasina government, and Indian friends cannot be good people". Before Bangladesh's independence, he moved to Rawalpindi, after which he later shifted to Canada, announcing himself as a self-proclaimed anti-liberation and supporter of war criminals. In another post on May 10, he criticised the Prime Minister and wrote, "Hasina is not forgiven even in the court of Allah". Currently living in Montreal, Taj Hashmi claims that he was born in Assam. He passed matriculation from Sirajganj BL College and later got admitted to Dhaka College. He also claims to have an honours and Master's degree from the Department of Islamic History and Culture at Dhaka University. Meanwhile, Reza Ahmed Faisal Chowdhury Suyeb, hailing from Patli village in Jagannathpur Upazila of Sunamganj, is on the list of top anti-state cyber criminals. He was once the managing director of the Europe office of the Channel-i in London, but he has been terminated. When he was in Bangladesh, he married a physician named Anwara Ali. Later, he went to London and married an employee of his office, sparking criticism in the Bengali community. His second wife has also abandoned him due to his chaotic and abusive nature. He runs a Facebook page called and makes provocative statements against the Bangladesh government, judiciary, army, ruling Awami League, and various industrialists and businessmen. A senior official of the channel seeking anonymity told IANS: "Suyeb has been removed from the Europe office for embezzlement of money and public statements in favour of war criminals, besides his failure to show account of income and expenditure," In his Facebook page, he runs an online program named 'Straight Dialogue' with pro-Pakistan, anti-liberation, and anti-state speeches. He posts the videos on YouTube and Facebook. Another pro-Pakistan propagandist Pinaki Bhattacharya is active on YouTube channel, spreading hatred against pro-liberation leaders of Bangladesh. Pinaki has called for a boycott of the mass procession and the celebration of the Bengali New Year, the Poila Boishakh, history and culture of the Bengali nation. He was accused of attempting to work for the militant outfits Hizb-ut-Tahrir, Al Qaeda, and IS. He tries to create an impression that a Hindu is supporting the militants from an objective point of view. On social media, Pinaki mocks Indian Prime Minister Narendra Modi, and also publicly supports genocides and crimes of Pakistan against humanity and the war criminals of 1971. He also criticizes the law and mocks convictions of war criminals and contempt of court. He managed to flee Bangkok in January 2019 and from there he travelled to France seeking political asylum. Now he constantly spreads hate against the culture of Bangladesh, government, army, and the Bangabandhu family. /IANS

UN peacekeepers call for protection from civilian attacks in Lebanon

Tehran, June 13 : Iran's parliament speaker and parliament members have condemned an anti-Tehran resolution recently adopted by the Board of Governors of the International Atomic Energy Agency (IAEA), […]

Jerusalem, June 13 : The Israel Institute of Technology (Technion) has announced that it has set up the country's first Artificial Intelligence (AI) research institute for tech solutions in medicine. […]

McDonald's successor reopens in Russia after US giant withdrawal

Moscow, June 13 : The successor to McDonald's in Russia, "Vkusno - i tochka," reopened the first batch of 15 restaurants in Moscow and its suburbs, three months after the US fast-food chain ended its […]