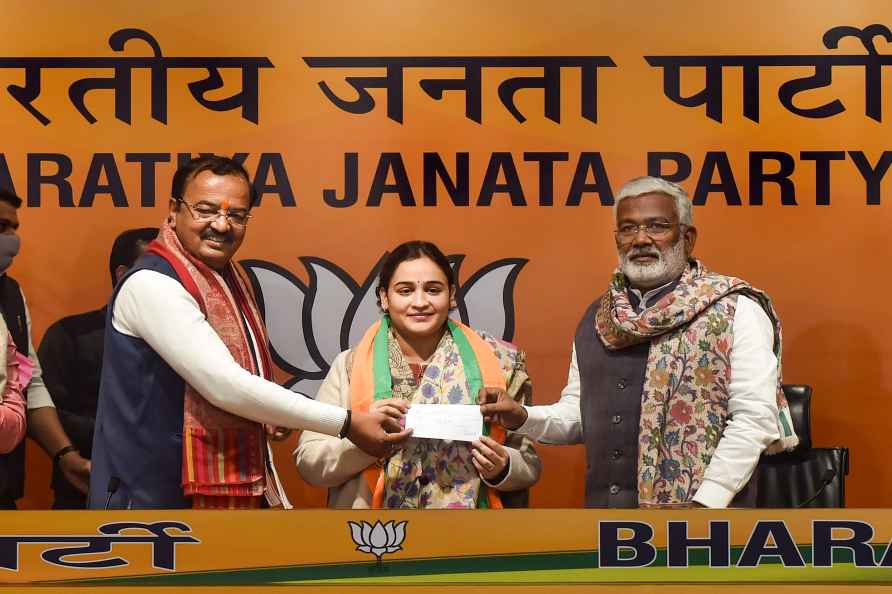 New Delhi, Jan 19 : By inducting Mulayam Singh Yadavs daughter-in-law Aparna Yadav into the party, the Bharatiya Janata Party (BJP) believes that it has won the perception battle against the Samajwadi Party (SP) ahead of the Uttar Pradesh assembly polls. An Uttar Pradesh BJP functionary said that in elections, winning everything including the perception battle is also important. "Recently, a perception was built that everyone is deserting the BJP after a few leaders including some ministers in Uttar Pradesh government resigned and joined the Samajwadi Party. But Aparna Yadav's joining will help us in building a perception that 'all is not well' in the Samajwadi Party including Yadav's family affairs," he said. Another BJP leader said that earlier, Akhilesh Yadav had an edge on perception battle but now, the saffron party has gained the lost ground after Aparna Yadav joining the party. Aparna Yadav joined the BJP on Wednesday in presence of Uttar Pradesh state unit president Swatantra Dev Singh, deputy chief minister Keshav Prasad Maurya, and media department national head Anil Baluni at party headquarters here. Everyone, while introducing Aparna Yadav, mentioned her as "Mulayam Singh Yadav's daughter in law. Singh said: "Neta ji's (as Mulayam Singh Yadav is popularly addressed) 'bahu' (daughter-in-law) is joining BJP." Maurya also referred to her as the 'putrvadhu' (daughter-in-law) of Mulayam Singh Yadav and called Akhilesh Yadav a failed family man and failed chief minister. "Neither is she a mass leader nor crowd puller, but Mulayam Singh Yadav's daughter-in-law joining BJP is itself a victory ahead of election even before the first phase of polling. Her joining doesn't benefit electorally but hugely helps in the perception building in our favour," another BJP leader said. Aparna Yadav, the wife of Mulayam Singh Yadav's son Pratik Yadav, had unsuccessfully contested the 2017 polls against BJP's Rita Bahuguna Joshi from Lucknow Cantt. After joining the BJP, she said whatever the party decides, she will abide by it. The Uttar Pradesh assembly polls will be held in seven phases in February-March starting from February 10. The counting of votes will be held on March 10. /IANS