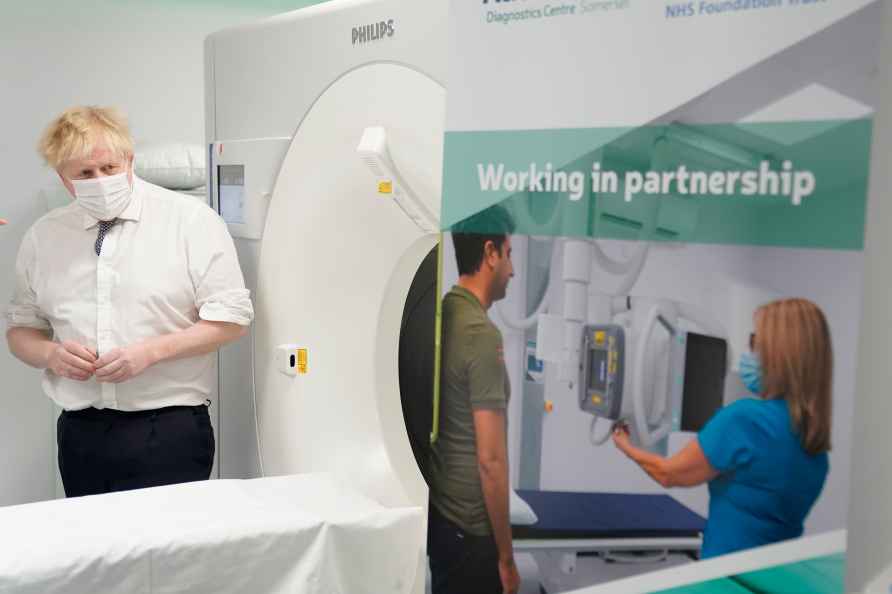 [Taunton: Prime Minister Boris Johnson looks up during a visit to the Rutherford Diagnostic Centre in Taunton, Somerset, Britain, Thursday Jan. 20, 2022. William Wragg, a Tory member of Parliament, said legislators calling for a challenge to Johnson.......s leadership have faced .......intimidation,....... and urged them to contact the police. Wragg accused Johnson.......s staff, government ministers and others of .......encouraging the publication of stories in the press seeking to embarrass those they who suspect of lacking confidence in the prime minister........ /PTI] By Susitha Fernando Colombo, Jan 20 : The Sri Lankan government on Wednesday criticised minority Tamil parties for writing to Indian Prime Minister Narendra Modi seeking Indian intervention to implement 13th Amendment and find a lasting solution to the long-standing Tamil issues. Energy Minister and Cabinet spokesman Udaya Gammanpila complained that if Tamil parties have concern about the implementation of the 13th Amendment,they should have gone to President Gotabaya Rajapaksa instead of going to the Indian Prime Minister. "If our Tamil parties have a concern or a worry with regard to the implementation of the 13th Amendment, they should have conveyed their concerns to our President instead of Indian Prime Minister," he said in response to a question raised by a journalist during a briefing on Cabinet decisions. "We are a sovereign country, not a part of the Indian Union," said Gammanpila, who is also the leader of Pivithuru Hela Urumaya (Pure Sinhala Heritage Party), one of the allies of the Rajapaksa government He said that "if our Tamil brothers have any issues with regard to implementation of the 13th Amendment they should have talked to our elected government, instead of outsiders." However, another Cabinet Spokesman Minister Ramesh Pathirana said that the Sri Lankan government has fully implemented the 13th Amendment and Rajapaksas have conducted election after the war On Tuesday, leading Tamil political parties representing Northern Tamils handed over a 7-page letter addressed to Indian PM Narendra Modi to Indian High Commissioner, Gopal Baglay. Led by senior Tamil politician and Tamil National Alliance (TNA) head R. Sampanthan, leaders of North-based political parties working under TNA and two other political party representatives including former Northern Province Chief Minister Justice C.V. Vigneshwaran met the Indian envoy in Colombo. Highlighting various instances where Indian leaders talked about the issues of Tamils in Sri Lanka with Sri Lankan leaders, the Tamil legislators stated: "The Government of India has actively engaged in this pursuit for the past 40 years and we are grateful for the firm commitment expressed by India to find a just and lasting solution that satisfies the legitimate aspirations of the Tamil speaking peoples to live with dignity, self-respect, peace and security." On July 29, 1987, the India-Sri Lanka Accord was signed and the 13th Amendment to the Sri Lankan Constitution was introduced, establishing a provincial council system to have devolution of powers to the Provinces as a solution to the ethnic problem in Sri Lanka. The letter stated that successive Sri Lankan governments on multiple occasions have promised to fully implement the 13 Amendment and given a specific undertaking to "build upon the 13th Amendment so as to achieve meaningful devolution:. The group of MPs also reminded that it is with India that Sri Lanka has signed an international bilateral agreement, the Indo-Lanka Accord, in which these ideals were set out. "However, successive Sri Lankan governments have not only failed in the full implementation of the provisions in the Constitution with regard to devolution and parity of status to the Tamil language, but have unilaterally reacquired powers and institutions from the provinces, which continues to date. In addition, lands belonging to the Tamil-speaking peoples are continuing to be grabbed by the State under various pretexts, with a view to radically alter the demography of the North and East. This must be halted immediately, or else the provisions of the Indo-Lanka Accord will be rendered nugatory," the Tamil legislators told PM Modi in their letter. /IANS

Meta to pay creators up to $4K for original content in Facebook Reels
Meta has announced to enable creators on its short-video making platform Reels on Facebook, which is a rival to TikTok, earn up to $4,000 per month fo

Lucknow: Uttar Pradesh Chief Minister Yogi Adityanath, on Friday, offered prayers at Hanuman Garhi and Ram Lalla temple on his third visit to Ayodhya after being re-elected as the chief minister for […]

Kolkata, May 6 (IANS) Union Home Minister Amit Shah said that he wants a Central Bureau of Investigation (CBI) enquiry into the the mysterious death of an activist reportedly associated with BJP's you […]

Rupee plummets 60 paise to close at 76.95 (provisional) against US dollar