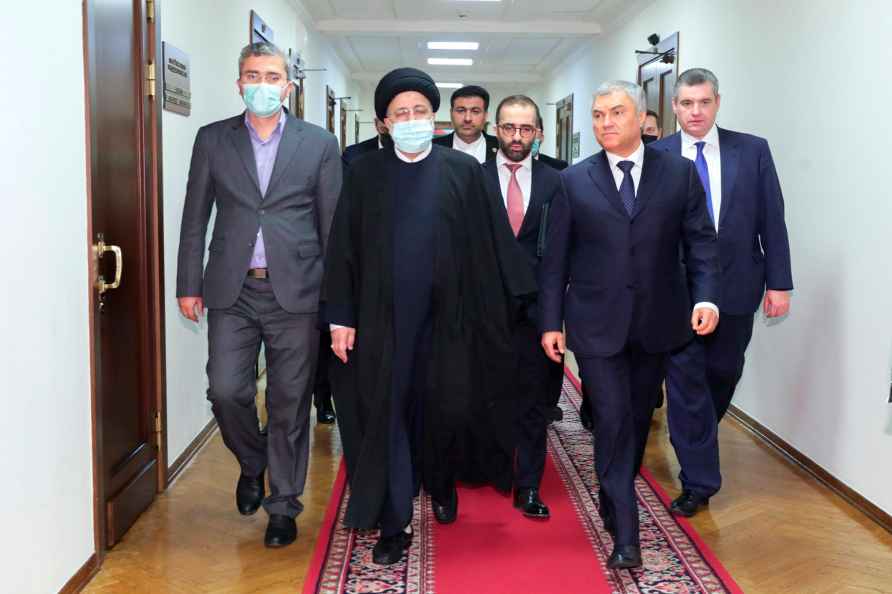 [Moscow: In this photo released by the State Duma, the Federal Assembly of The Russian Federation Press Service, Iranian President Ebrahim Raisi, second left, and Russian State Duma speaker Vyacheslav Volodin, second right, walk during their meeting in Moscow, Russia, Thursday, Jan. 20, 2022. /PTI] Moscow, Jan 20 : Russian President Vladimir Putin and his Iranian counterpart Ebrahim Raisi discussed bilateral economic cooperation and other international issues during their first meeting here. This is Putin and Raisi's first in-person meeting since the latter took office in August last year, and also the first visit by an Iranian leader to Russia since 2017. During Wednesday's meeting, Putin noted that trade between the two countries increased by over 6 per cent in 2020 despite the pandemic, and by more than 38 per cent last year. In regards to international cooperation, Putin said that Russia and Iran are able to assist the Syrian government in "overcoming threats posed by international terrorism". "Relations between Iran and the Eurasian Economic Union (EAEU) are developing, and we are actively working to create a free-trade zone between Iran and our association," the Kremlin said in a statement, citing the Russian leader. Raisi in turn spoke in favour of further developing bilateral economic, trade, cultural, political, and military relations with Russia. "In the current, very exceptional conditions, where there is opposition to the unilateral actions of the West, including the United States, we can create synergy in our interaction," he said. Raisi said that Iran would continue to develop despite Western sanctions and threats, and would work on establishing mechanisms for the gradual lifting of all sanctions and restrictions. The Iranian leader said it is necessary to enhance trade and economic ties, praising the current cooperation between Iran and Russia within the framework of the Shanghai Cooperation Organization and the EAEU. At the end of the meeting, the Iranian side handed over to Moscow a draft agreement on strategic cooperation for a 20-year period. Raisi arrived in Moscow on Wednesday. On Thursday, the Iranian President is expected to address the State Duma and visit the Moscow Cathedral Mosque. /IANS

IPL 2022: Marsh, Thakur, spinners carry Delhi into top four with 17-run win over Punjab
[Damascus: This frame grab from a 2013 video, shows Syrian Wassim Siyam blindfolded being forced to run into a large pit full of bodies all shot dead