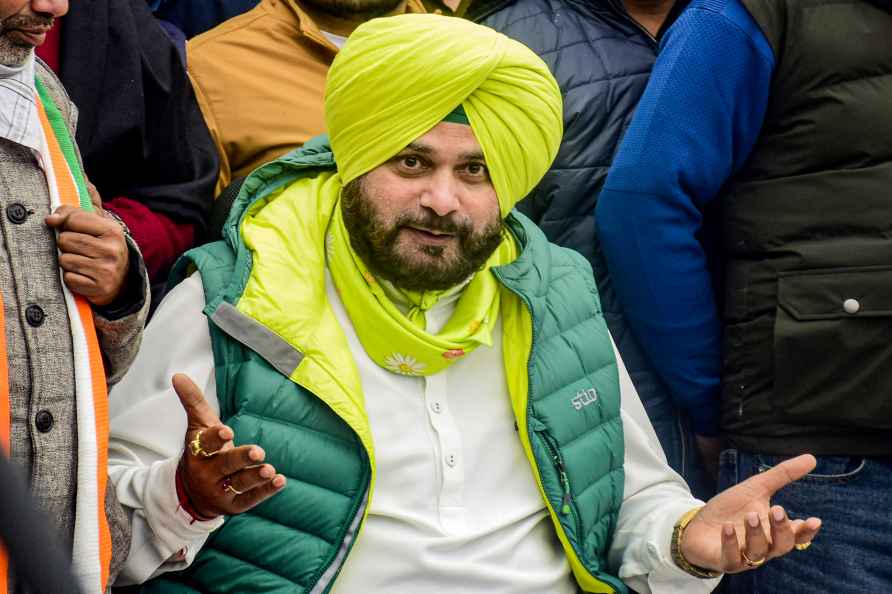 [Amritsar: Punjab Congress President Navjot Singh Sidhu addresses a press conference ahead of Punjab elections, in Amritsar, Monday, Jan. 17, 2022. Election Commission postponed the Punjab elections in view of Guru Ravidas Jayanti on Feb. 16, after requests from several political parties. The elections will now be conducted on Feb. 20 instead of the earlier date of Feb. 14. ( /PTI] New Delhi, Jan 17 : The Election Commission of India on Monday changed the February 14 date of polling in Punjab to February 20 after request from the political parties due to Sri Guru Ravidas Jayanti. After a detailed meeting on the rescheduling of the poll date, the Commission changed the poll schedule as announced by it on January 8. According to the new schedule for Punjab assembly polls, now the date of notification will be January 25 (Tuesday), 2022, last date of nomination will be January 2022 (Tuesday), date of scrutiny - February 2, 2022 (Wednesday), date of withdrawal would be February 4 (Friday) and date of polling will be February 22, 2022 (Sunday). Counting of Votes will be taken up on March 10, 2022 (Thursday). The Election Commission received several representations from State Government, Political Parties and other organizations drawing attention regarding movement of a large number of devotees from Punjab to Varanasi for participation in Sri Guru Ravidas Ji Jayanti celebrations, which is observed on February 16, 2022, the EC said in a statement. It was brought to the notice of the Commission that a large number of devotees start moving for Varanasi around a week before the day of celebration and keeping the poll day on February 14, 2022 will deprive a large number of electors from voting. In view of this, they had requested to shift the poll date a few days after February 16, 2022, the EC officials said. "Commission has also taken inputs from State Government and Chief Electoral Officer of Punjab in this regard and after considering these new facts emerging out of these representations, inputs from the State Government and Chief Electoral Officer, past precedence and all facts and circumstances in the matter, now Commission has decided to reschedule the General Elections to Legislative Assembly of Punjab," the ECI said in a statement. Earlier, the ruling Congress party, the BJP and the Aam Aadmi Party had requested the Commission to defer the polling on February 14 as it is close to the Sri Guru Ravidas Jayanti on February 16. Submitting a written request by the Congress Party on January 13, it said that over 20 lakh of Schedule Caste voters go to the religious visit to the places related to Sant Ravidas ji. The Party further said that a sizable number of SC voters visit Varanasi from February 10 to 16 every year, therefore, the scheduled date for the poll in Punjab should be postponed till Ravidas Jayanti. Later the BJP and Aam Aadmi party also made a similar request to the EC, reiterating the same reason stating that many of the voters will either miss their religious trip or skip voting on February 14. /IANS

IPL Turning Point: Pacers make it possible for Mumbai Indians against CSK
Mumbai: Pitches for T20 matches usually favour the batters as the organisers believe that the fans want to see the ball being smacked around for sixe

Explosion in Karachi leaves 13 injured
Islamabad: Thirteen people were injured when a blast went off inside a market area in the capital city Karachi of Pakistan's southern Sindh province,