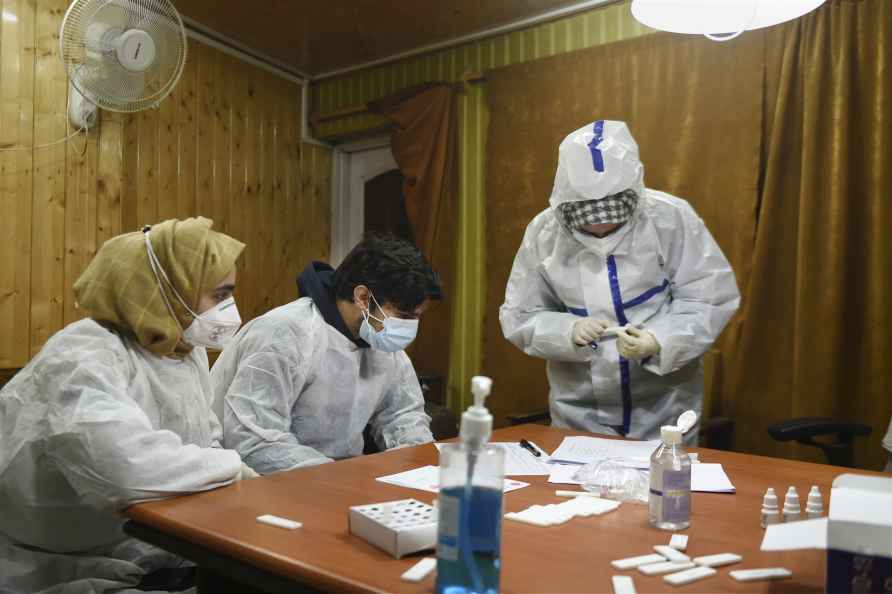 [Srinagar: Healthworkers process COVID-19 test at a government department, in Srinagar, Monday, Jan. 17, 2022. In the last 24 hours, India recorded 2,58,089 COVID-19 cases and 385 deaths. ( /PTI] Bhubaneswar, Jan 17 : For the fifth consecutive day, Odisha has registered over 10,000 Covid-19 cases as 10,489 persons were found infected with the virus during the past 24 hours. The state had reported 11,177 cases on Sunday, 10,856 cases on Saturday, 10,273 cases on Friday and 10,059 on Thursday, respectively, According to the State Information and Public Relation department, 6,082 out of the total news cases were detected in quarantine while 4,407 are local contact cases. Highest 2,934 cases have been reported from Khurda district, followed by Sundargarh (1,447) and Cuttack (786), Balasore (433), Sambalpur (387) and Mayurbhanj (383). With this, the total number of active cases in the State increased to 75,797. The State has recorded 688 less cases in comparison to the cases recorded on Sunday as the number of tests has come down by 6,943. However, the daily test positive rate (TPR) continued to surge to 14.96 per cent from 14.49 per cent recorded on the previous day. During the last 24 hours, the State government has confirmed three more deaths due to Covid-19 following a health audit. Two deaths were reported from Khordha district while another from Angul district. The death toll in the State stood at 8,484. /IANS

IPL 2022: Marsh, Thakur, spinners carry Delhi into top four with 17-run win over Punjab
[Damascus: This frame grab from a 2013 video, shows Syrian Wassim Siyam blindfolded being forced to run into a large pit full of bodies all shot dead