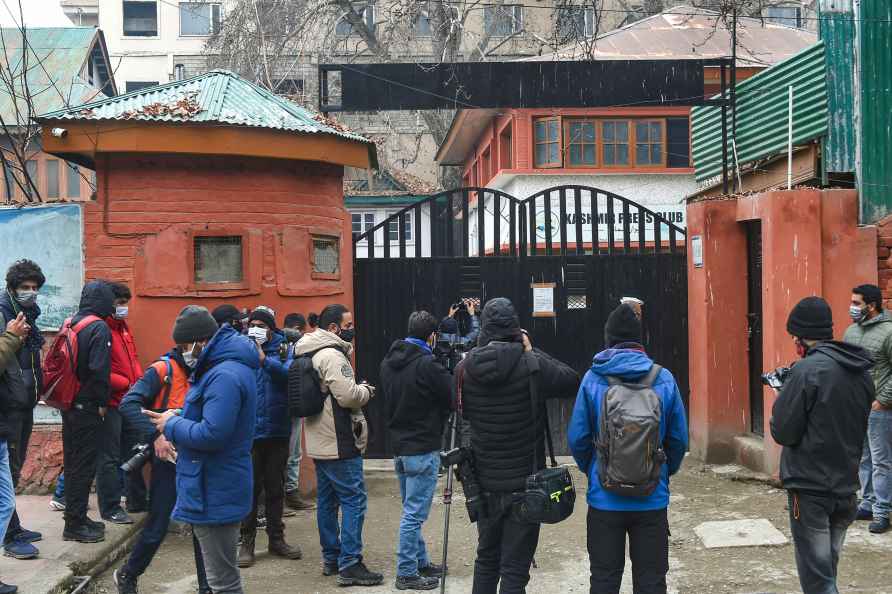 [Srinagar: Media personnel assemble outside the Kashmir Press Club building after Jammu and Kashmir Government took back the premises, in Srinagar, Monday, Jan. 17, 2022. The administration on Monday took back the premises allotted to the club in the wake of factionalism that erupted in the largest journalists? body in the valley last week. ( /PTI] Srinagar, Jan 17 : A war of attrition broke out on Monday between local journalists over the control of Kashmir Press Club after its management was taken over by senior journalist, Saleem Pandit. Many journalists have demanded that the control of the club should be given to a team of duly elected management. The new management headed by Saleem Pandit has dismissed all criticism of the club's take over by them. The social media is now full of comments for and against the new management. The Editor's Guild of India has criticised what it called the 'forcible takeover of Kashmir Press Club'. On the other hand, the interim management headed by Saleem Pandit has asked those criticising their move to 'mind their own business'. "It is unfortunate that the esteemed Editor's Guild of India has taken a one-sided view. The Club has been taken over by its founding president till elections are held. "The interim body took over the defunct club on January 15 on the popular demand of the journalistic fraternity who were otherwise facing numerous problems. "The journalists wanted the founding president to take over the management. The founding president had played a pivotal role in the establishment and other reputed working journalists to pave the way for the much awaited elections." Those criticising the take over claim that it was taken with support of the government that provided police protection to the new management. It must be mentioned that the outgoing president, Shuja ul Haq has not been participating in the affairs of the press for quite some time now. /IANS