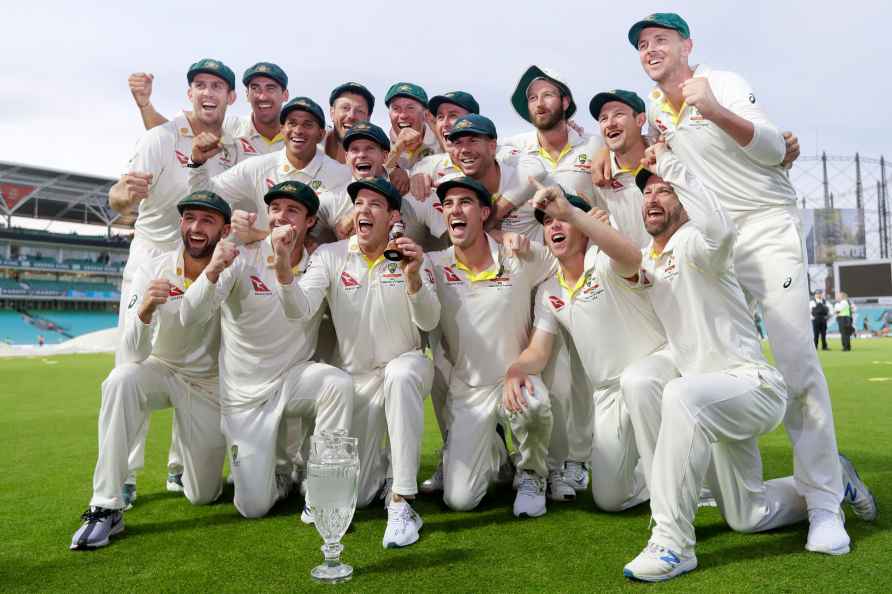 Hobart, Jan 16 : After clinching the 2021-22 Ashes series 4-0, Australia skipper Pat Cummins on Sunday called the triumph against England a 'stuff of dreams', adding that the five-match series brought so many positives for his side. Showing their sheer dominance, fast bowlers -- Pat Cummins (3-42), Scott Boland (3-18), Cameron Green (3-21) helped Australia thrash England by 146 runs in the fifth and final Test on Day 3, to win the Ashes series 4-0 and to retain the urn. "It is really the stuff of dreams. Pretty crazy. To be at the end of a 5-match series with so many positives and 4-0, yeah really pumped. I am really happy as a captain. We have had some 15 players used in this series, some tough calls. Certainly feels like we are on to something big," said Pat Cummins in the post-match presentation. The 28-year old Cummins alos hailed his teammates and added that his team is looking forward to playing lots of Test cricket. "Cam Green with bat and ball has been outstanding. Scotty Boland was fantastic. And hope the old pros continue their good work. I am super excited for overseas Test cricket. One thing in the pandemic we haven't done is not play too much of Test cricket. So looking forward to adapt. Thanks for your (support) despite these tough times. We had an absolute ball," he said. Talking about the celebration, the pacer said: "Nobody is going to take the urn off me tonight. Did not expect the game to get over today, now have a week off, will enjoy with a couple of beers and listen to Head talking about his tons [smiles]. He calls himself the wheelie bin as he reckons when he's close-in, he is like a keeper [on Head's celebrations after a catch]." /IANS

Mayhem Studios to host India's second-largest drone show after the 'Beating the Retreat' Ceremony in Delhi
Mumbai May 17 : Mumbai is set to witness the city's largest drone show on Tuesday night (May 17) at the Mahalaxmi Race Course. The drone show, organis

[Rayong: U.S. military salute the possible remains of a WWII U.S. airman found in northern Thailand to a waiting C-17 during a repatriation ceremony Wednesday, May 18, 2022, at the U-Tapao Air Base in […]

Colombo: Human rights activists walk to offer flowers to the sea in remembrance of victims of Sri Lanka's civil war, at the ongoing anti government protest site in Colombo, Sri Lanka, Wednesday, May 1 […]

**EDS: IMAGE POSTED BY @KuldeepKumarAAP** New Delhi: Police take away AAP MLA Kuldeep Kumar during an anti-encroachment drive by the DDA at Khichdipur village, in New Delhi, Wednesday, May 18, 2022. ( […]