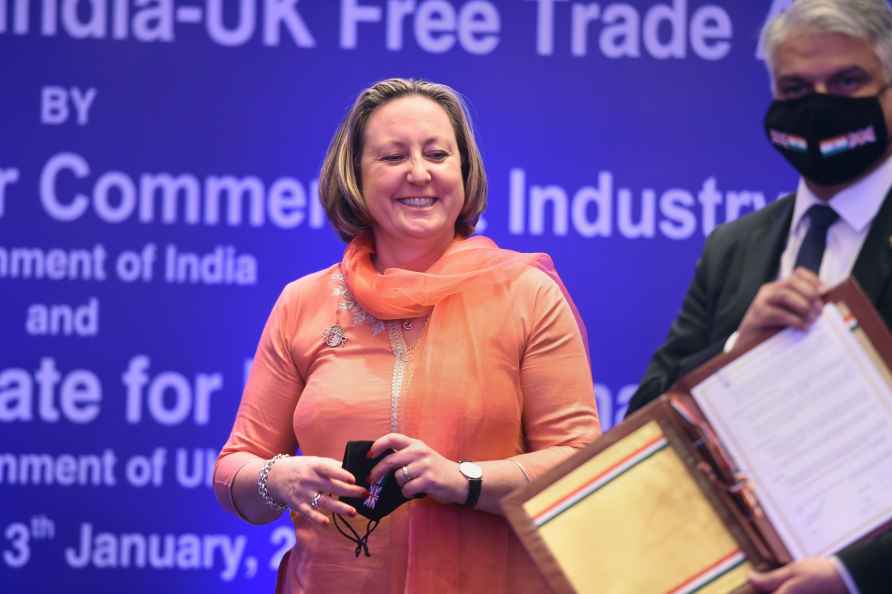 [New Delhi: UK's Secretary of State for International Trade Anne-Marie Trevelyan during launch of Negotiations for India-UK Free Trade Agreement, in New Delhi, Thursday, Jan. 13, 2022. ( /PTI] New Delhi, Jan 13 : With no progress on a free trade deal with the US, and none expected in the foreseeable future, the formal start of talks with India is the biggest negotiation the UK government will launch this year, the BBC reported. India is on course to become the third largest economy in the world by 2050, and the government hopes UK-India trade will double over the course of this decade. On Thursday in New Delhi, British International Trade Secretary Anne-Marie Trevelyan will ceremonially launch negotiations between India and the UK for a Free Trade Agreement (FTA), during which she will meet her counterpart Union Commerce Minister Piyush Goyal. Trevelyan calls the prospect of a free trade deal with India "a golden opportunity" and there are certainly huge commercial prizes up for grabs, the BBC report said. Before leaving for New Delhi, she had said: "We want to unlock this huge new market (offered by India) for our great British producers and manufacturers across numerous industries from food and drink to services and automotive. "India marks the start of our ambitious 5-star year of UK trade and will show how the deals we negotiate will boost the economies across all nations..." EY's director of trade strategy, George Riddell says the move to open negotiations is a "welcome step", and one which he says is already generating real enthusiasm in the business community. The European Union (EU) has been trying for years to reach a meaningful deal with India, with little success. Australia too, has been working on a deal for a decade, the report said. Areas such as government procurement policy and the trade in services are particularly difficult. "The current terms under which services providers are trading between the UK and India date from 1995, and don't take into account any of the technological developments that have taken place over the past 25 years," the BBC quoted Riddell as saying. British officials say both sides are now keen to get a UK-India deal done quickly, and they would like it to be agreed by the end of the year. But it's an ambitious timeline. Meanwhile, the UK's Department of International Trade (DIT) has estimated that "Indian companies already support 95,000 jobs across the UK", with the Tatas being the biggest Indian employer in the UK. The Department's expectation is that "the UK wants an agreement that slashes barriers to doing business and trading with India's 2 trillion pound economy and market of 1.4 billion consumers, including cutting tariffs on exports of British-made cars and Scotch whiskey". Presently, the two nations aim to double the present trade turnover by 2030. and the DIT believes this stood at 23 pounds billion at the end of 2019. /IANS

Trade deal with India is UK's biggest negotiation this yr

BJP pulls up Vijayan for seeking treatment in US

Thiruvananthapuram, Jan 12 : The Kerala unit of the BJP on Wednesday took potshots at Chief Minister Pinarayi Vijayan for his upcoming trip to the US for seeking medical treatment. Ever since th […]

New Delhi, Jan 12 : Observing the serious violations of environmental norms by a developer of a smart city project in Uttar Pradesh--Wave City at Ghaziabad and High-Tech City at NOIDA, the National Gr […]

Tirupati: Chief Justice of India Justice NV Ramana after offering prayers at the Lord Venkateswara temple, illuminated on the occasion of auspicious Vaikuntha Ekadasi, at Tirumala in Tirupati, Thursda […]