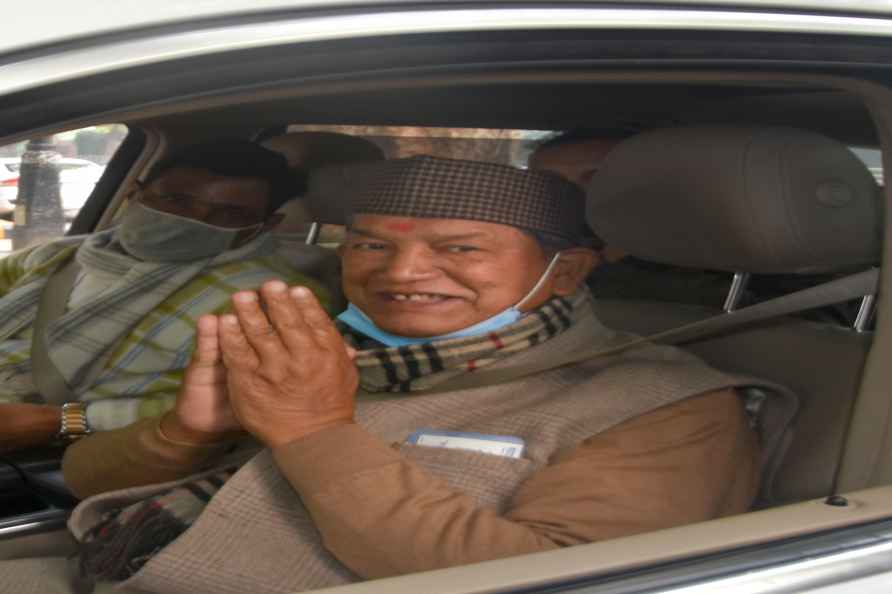 [New Delhi: Former Uttarakhand Chief Minister and senior Congress leader Harish Rawat on his way to attend the party's Central Election Committee meeting for Uttarakhand Assembly polls, in New Delhi, Thursday, Jan. 13, 2022. ( /PTI] New Delhi, Jan 13 : The BJP Central Election Committee (CEC) will meet on Thursday to finalise candidates for Uttar Pradesh Assembly polls. The meeting will reportedly be held in hybrid form as few of the CEC members, including party chief J P Nadda, have tested positive for Covid-19. Uttar Pradesh Chief Minister Yogi Adityanath and other CEC members, who are physically attending the meeting, have reached party headquarters here. According to sources, Prime Minister Narendra Modi will join the meeting virtually and the CEC is likely to finalise names of candidates for the first two or three phases of polls. "After finalisation of candidates, names will be announced accordingly," they said. The Assembly polls will be held in seven phases in February-March starting from February 10. Counting of votes will be held on March 10. In the last two days, a lot of discussion and deliberation has taken place in meetings chaired by union home minister Amit Shah. "In the last two days in marathon meetings lasting over 10 hours, names have been shortlisted for most of the seats. Once the CEC finalises the names, the BJP will announce the candidates," a senior party functionary said. Apart from Nadda, CEC member Rajnath Singh, Shahnawaz Hussain and Nitin Gadkari were also tested positive for Covid recently. Last day of nomination for 58 Assembly seats, where polling will be held in the first phase, is January 21, while that for 55 seats in the second phase is January 28. Voting will be held on February 10 and February 14 in the first and second phase respectively. /IANS

New Delhi, Jan 12 : Observing the serious violations of environmental norms by a developer of a smart city project in Uttar Pradesh--Wave City at Ghaziabad and High-Tech City at NOIDA, the National Gr […]

Tirupati: Chief Justice of India Justice NV Ramana after offering prayers at the Lord Venkateswara temple, illuminated on the occasion of auspicious Vaikuntha Ekadasi, at Tirumala in Tirupati, Thursda […]

Tirupati: Devotees take part in the golden chariot procession of the Lord Venkateswara temple on the occasion of auspicious Vaikuntha Ekadasi, at Tirumala in Tirupati, Thursday, Jan. 13, 2022. ( /PTI […]